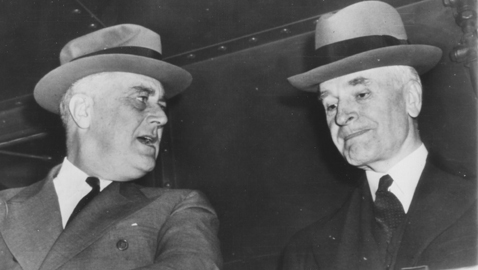 By Ray Hill
As President Franklin Roosevelt and Secretary of State Cordell Hull prepared to approach Congress to revise the Neutrality Act, the opposition in Congress was formidable.  Of course the Roosevelt administration was aided by some equally imposing Congressional allies.  Key Pittman, Chairman of the Senate Foreign Relations Committee, was not exactly one of those formidable figures.  The Nevada Democrat had been in the Senate since 1913 and despite his stately appearance was a severe alcoholic prone to benders, as well as periodic impolitic statements.  Secretary of State Cordell had to work with Pittman as the Congress passed a series of neutrality laws.  The power of the noninterventionist bloc was demonstrated with the passage of the Neutrality Act of 1935.  That particular bill had its genesis in the Roosevelt administration’s desire to invoke sanctions against belligerent nations.  FDR wanted the power to use those sanctions as he saw fit, a notion that did not much appeal to Congress.  Many of the progressives, especially those Republicans who had backed Roosevelt over Hoover in 1932, were becoming suspicious of FDR, thinking the President had too much power.  The isolationists crafted the Neutrality Act of 1935 to create a general embargo and notified American citizens who booked passage on ships owned by belligerent countries, they did so at their own peril.  Despite the language of the new neutrality law, President Roosevelt extended what he referred to as a “moral embargo” with respect to trade over the Italian – Ethiopian war.  The Neutrality Act of 1935 also prohibited the sale or shipment of arms or war materials to either Italy or Ethiopia, a sanction that did little to impede the progress of the well-equipped Italian armed forces.  It also prevented the United States from providing war materials to the ill-equipped Ethiopians who answered the call to arms of their Emperor, many of whom were armed with only spears.

Six months after the passage of the Neutrality Act of 1935, Congress approved the Neutrality Act of 1936, which extended the first act for another fourteen months.  Less than a year later, Congress passed the Neutrality Act of 1937, which addressed what many considered to be a gross imperfection in the 1936 legislation.  The Neutrality Act of 1937 forbade supplying Spain with arms and war materials; Spain was then engaged in a bloody civil war between the “Republicans”, loyal to the left-leaning government and the “Nationalists” led by General Francisco Franco.  Both sides attracted support from foreign governments, with the loyalists receiving material aid from Soviet dictator Josef Stalin, while the Nationalists got help from Adolf Hitler and Benito Mussolini.  The flaw in the earlier neutrality legislation did not address civil wars, a fact that was naturally exploited by American companies to sell supplies and products to either side.  Congress also tightened the law about American citizens who wished to travel.  The Neutrality Act of 1937 outlawed travel on ships owned by belligerent countries.  President Roosevelt sparked a fierce controversy in Congress by insisting on what became known as “cash and carry”, meaning belligerent nations could buy what they wished if they had the cash to pay for it and could transport it back home.

With the resumption of the war between China and Japan, Senator J. Hamilton Lewis of Illinois issued a note of caution as Congress considered the Neutrality Act of 1937.  “The United States can be at war with China or Japan, or with both, within an hour if it obeys the demand that is being made to enforce the neutrality law at this time in the conflict between Japan and China,” the pink-whiskered Democrat intoned.  Lewis pointed to the statement by Senator Key Pittman that the neutrality law required that “the President must give up his immediate efforts for peace in the Orient and declare that China and Japan are at war, and the United States becomes the opponent of both.”  Lewis was of a different mind and the immaculately dressed solon told his colleagues, “Those who are demanding that the United States enforce its neutrality law at once fail to see that the moment we announce either one of the nations as the aggressor and declare both as being at war, our ships of trade delivering American goods in the Orient would at once be seized by either China or Japan, or both, as bringing supplies to the enemy.”  Worse still, Senator Lewis said, “The American citizens would be seized and imprisoned, and then it is that America must go to the rescue of her people and her property, and this she must do by her American Navy, and America becomes at once involved in the war of China and Japan.”  Lewis continued with excellent logic to describe step by step the probabilities should President Roosevelt attempt to invoke the neutrality law.

Franklin Roosevelt was far too shrewd a politician to be trapped so easily and sidestepped the issue with the explanation neither Japan nor China had officially declared war on the other, so the neutrality law did not apply in that particular instance.  While Roosevelt’s explanation was certainly disingenuous, the President knew China was utterly dependent upon war materials being supplied by other countries.  Nor could the Chinese transport the needed materials back home, a problem FDR solved by having British ships carry the supplies to China.  Nobody was surprised when the President’s actions infuriated the isolationists in Congress, who fumed FDR had, at the very least, violated the spirit of the neutrality legislation.

As Congress considered the Neutrality Act of 1937, the memories of America’s entry into the First World War were still fresh. There were twenty-one senators who had been in office when America declared war against the German Empire and her allies in 1917.  As the anniversary of the declaration of war approached, those senators were asked for comment.  Senator Matthew M. Neely of West Virginia acknowledged it had been necessary at the time but emphasized, “Except in case of invasion, I would never vote for another war.”  Senator Ernest Lundeen of Minnesota, who had been a congressman at the time and had voted against declaring war, snarled, “ask those who voted us into the carnage if they are proud of it; I challenged them from the Senate floor last year, and their silence was eloquent.”  Texas Senator Morris Sheppard, then the longest serving member of Congress, retorted, “Voting to declare war was the proudest act of my life; I am prouder of it every year.”  Senator George W. Norris, the Nebraska Independent, like Lundeen had voted against a declaration of war in 1917 and had been roundly denounced by many as a traitor to his country, said, “The course of history for 20 years has justified my vote.”  Senator Alben Barkley of Kentucky, Majority Leader of the Senate, wondered, “Suppose we had stayed out and subsequently had an ambitious and hostile power at our shores?”  Senator Wallace White, a Republican from Maine, had cast his very first vote as a congressman to declare war, frankly confessed, “While I felt the solemnity of the moment to the full, I must admit I voted with no real appreciation of the consequences – – – economic, social and political – – – that were to follow.”  Senator Pittman summed up the hopes of all of his colleagues when he said, “Our neutrality legislation will help us from becoming enmeshed” in foreign wars.

Senator McKellar also favored President Roosevelt invoking the neutrality act as the Spanish civil war became increasingly bloody and drew additional participants in Europe.  Senator William E. Borah of Idaho observed, “From the reports, I should say an actual war is on, sufficient to justify the application of our neutrality law to all parties now participating both under cover and openly.”  Tennessee’s Senator Kenneth McKellar agreed the neutrality law should be invoked to “keep this country out of the conflict.”

“It looks like war,” McKellar agreed, “but America will never get into this one.”

In October, President Franklin Roosevelt made an important speech on neutrality and America’s place in the world.  Known as his “quarantine speech”, FDR spoke while ostensibly dedicating a new bridge in Chicago.  Roosevelt used the opportunity to bring attention to atrocities committed by Japan, Germany and Italy without ever mentioning any country by name.  FDR warned that the United States could not hide “through mere isolation or neutrality” as flames began to engulf much of the rest of the world.  The President proposed a “quarantine” against “the epidemic of lawlessness” spreading like a contagion.  Roosevelt said, “…the time has come for the peace-loving nations to get together and talk over what can be done about the situation.”  FDR contrasted the peace and security of the United States, which he had personally observed while traveling through the country on his private train with that of much of the world, noting things were growing progressively worse.  Roosevelt said the hope for peace was being “given way to a haunting fear of calamity.”

President Roosevelt mellifluous voice made his words especially eloquent as he said, “Without a declaration of war, and without warning or justification of any kind, civilians, including women and children, are being ruthlessly murdered with bombs from the air.  In times of so-called peace, ships are being attacked and sunk by submarines, without cause or notice.  Nations are fomenting and taking sides in civil warfare in nations that have never done them any harm.  Nations claiming freedom for themselves deny it for others.”  The audience listened respectfully and silently as the President went on to describe the horrors of war.  “Innocent peoples and nations are being cruelly sacrificed to a greed for power and supremacy which is devoid of all sense of justice and humane consideration.”  Roosevelt paraphrased a paragraph written by James Hilton, author of Lost Horizon, saying, “Perhaps we foresee a time when men, exultant in the technique of homicide, will rage so hotly over the world that every precious thing will be in danger – – – every book and picture and harmony, every treasure garnered through two millenniums, the small, the delicate, the defenseless – – – all will be lost or wrecked or utterly destroyed.”  President Roosevelt warned “the very foundations of civilization are seriously threatened” and told Americans, “If these things are come to pass in other parts of the world, let no one imagine that America will escape, that it may expect mercy, that this Western Hemisphere will not be attacked, and that it will continue tranquilly and peacefully to carry on the ethics and the arts of civilization.”  The President noted, “When an epidemic of physical disease starts to spread, the community approves and joins in a quarantine of the patients in order to protect the health of the community against the spread of the disease.”  Roosevelt said he intended to pursue a policy of peace but believed war was a contagion of its own kind.  “America hates war.  America hopes for peace.  Therefore, America actively engages in the search for peace,” Roosevelt concluded.

Reporter Paul Y. Anderson, covering the President’s speech for the St. Louis Post-Dispatch, wrote the audience listened to Roosevelt in silence, yet seemed “puzzled.”  The crowd did applaud when FDR called for “a concerted effort” of those nations desiring peace, as well as when Roosevelt asserted national morality was quite as important as private morality.

The 1938 elections seriously weakened Franklin Roosevelt’s hold on Congress.  Things were far different from the legendary “First Hundred Days” of Roosevelt’s administration.  The President’s influence with Congress was so great peppery Senator Carter Glass of Virginia had snapped, “Why, if the President asked Congress to commit suicide tomorrow, they’d do it.”  One of the biggest reasons for Roosevelt’s increased difficulties with Congress lay with his own petulance.  The President had overreached with his determined effort to enlarge the U. S. Supreme Court.  FDR insisted, against virtually the advice of every Roosevelt courtier, on purging those Democrats he believed to be obstructionists.  The President privately proposed to realign the political parties into liberals and conservatives.  It would become the greatest disaster of Roosevelt’s presidency.