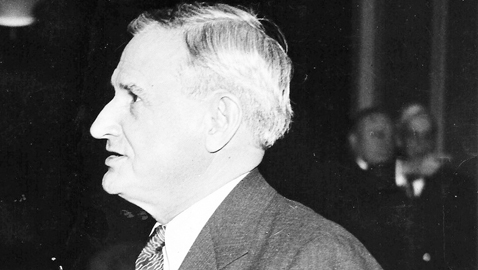 Tennessee’s senior United States senator, Kenneth D. McKellar, had moved strongly behind the neutrality program of President Franklin Roosevelt and Secretary of State Cordell Hull.  McKellar was unquestionably the longest serving and most powerful member of Tennessee’s Congressional delegation and his support for Hull’s program was shared by most members of Congress representing the Volunteer State.  Freshman Congressman Joseph W. Byrns, Jr., son of the late Speaker of the House, had been invited to make a speech before the National Exchange Club in Atlantic City, New Jersey.  Young Byrns, a member of the House Military Affairs Committee, used the occasion to speak of the need for Congress to appropriate more money for national defense.  Byrns warned the United States could expect both “internal” and external problems and should be “prepared for both.”  Congressman Byrns told his audience, “It takes additional money to thoroughly convince the war-mad, sabre-rattling, territory-seeking dictators of the world that we in America do not wish bombs and poisonous gas rained from the sky upon our civilian population.”  After painting a rather dire picture, Byrns went on to say, “I am in favor of convincing them that we have the arms to use, that we are ready to use them, and that we know how if the occasion demands.”

Carroll Reece, a Republican, had represented Tennessee’s First District since 1920 with the exception of two years when he had lost his seat briefly.  Reece had been in the news recently, but not because of his activities in Congress.  Congressman Reece, accompanied by his wife and daughter, had taken a vacation in Hawaii and upon his return to the mainland had disembarked from his ship and when he turned around to board the ship once again, had been stopped by the intrepid Sergeant Norman Smith, a custom’s officer.  Carroll Reece took exception to Sergeant Smith’s attempt to keep him from returning to his wife and daughter and the two “tussled violently.”  Reece latched on to Sergeant Smith’s ear, which “bled profusely.”  Evidently the Congressman was getting the better of the Sergeant, who needed the assistance of a private detective assigned to the pier.  The detective was able to help pry Congressman Reece’s teeth from Sergeant Smith’s ear.  Reece seemed not at all bothered by the publicity from the bizarre encounter and made a few partisan speeches on his way back east.  Reece was not much sympathetic to the repeal of the arms embargo.  By late September of 1939, Congressman Reece was the sole member of the Tennessee Congressional delegation who had not announced his position on the neutrality program.  Even Tennessee’s newest members of Congress, Estes Kefauver who had been elected to replace Sam D. McReynolds and Wirt Courtney who had been elected following the death of Congressman Clarence W. Turner, had announced their support for the plan pushed by Secretary of State Cordell Hull and President Roosevelt.  Congressman Courtney said, “I visited all 12 counties in my district and found that at least 95 per cent of my constituents favor repeal of the arms embargo.”  “They are all bitterly opposed to our going to war,” Courtney added.  “I don’t see how selling arms is going to involve this country any more than selling wheat, oil and other products.”

Congressman Jere Cooper of Dyersburg had announced his support for repealing the arms embargo.  “I have full confidence in President Roosevelt and Secretary Hull.  I am sure they are keeping in touch with the situation and I think it is best to follow their leadership.”

While one could certainly argue there was nothing surprising about two freshmen Democrats supporting the administration, Republican Congressman J. Will Taylor had also announced his support for repealing the arms embargo.  Taylor had said, “I shall never vote to send American troops to fight and die on foreign soil unless and until our country is first invaded by a foreign foe.”  Taylor had warned his fellow congressmen to expect a “veritable avalanche of propaganda in this country designed to incite the passions and prejudices of our people in an effort to array them on one side or the other in this European conflict.”    In fact, “Hillbilly Bill” believed “this campaign of propaganda has already manifested itself.”  Taylor thought “the increasing volume of mail of both members of the House and Senate” was the result of propaganda efforts to sway public opinion.  Congressman Taylor was not afraid to call names and charged the “insidious and mendacious” propaganda had emanated from “subversive and un-American” organizations “such as the Communists and the German-American bund” both of which he considered to “have become a real menace to our free institutions.”  Taylor thought the goal of the sinister organizations was to “breed war hysteria” in an effort to “confuse the merits of vital issues” facing the country.

Will Taylor was not always an orthodox Republican and urged support for the cash and carry provision of the neutrality law. “No matter how well an army may be equipped with arms and ammunition – – – no matter how highly mechanized it may be, if it is not properly fed it is doomed to dismal failure.” Taylor came to his point, which was the idea of selling foodstuffs to belligerent nations and shipping the commodities to the buyer was “inconsistent and absurd” if the goal was for America to remain out of the war.  Congressman Taylor argued that any neutrality law must “keep our merchant vessels outside of the zone of hostilities.”

One of the primary differences between J. Will Taylor and Carroll Reece was that Congressman Reece spoke with a special authority when discussing military matters.  Reece had served in the First World War and was a genuine war hero but as the debate began, the First District congressman spoke in generalities.  “It is true that democracies are jeopardized now as they were then,” Reece admitted, “but we learned that the World War did not make the world safe for democracy.”

Carroll Reece pointed out, “And we have learned that nations do not go to war merely for democracy as an abstract concept.  Totalitarianism and democracy are not more mutually repellent today than they were a few years ago.”  Congressman Reece insisted, “Overt acts, not theories, cause wars.”  Still, Reece’s tussle in Los Angeles received far more press attention than his views on neutrality, at least outside of Tennessee.  Nor was Reece especially pleased by the special called session of Congress.  The East Tennessean thought the only consideration before Congress was what will help to keep the United States out of war.  “Humble though I may be, I intend to do everything possible to prevent this nation being dragged into the European conflict,” Reece pledged.

As the debate on repealing the arms embargo began in the United States Senate, Carroll Reece became the only member of the Tennessee Congressional delegation not to declare his vote.  Senator K. D. McKellar was one of the first to take the Senate floor and promptly offered thirty-one reasons for opposing continuing the arms embargo and vowed never to vote for war, unless America was attacked by an enemy.   McKellar had been in the Senate when America entered the First World War and had never forgotten the experience.  “I voted for it in 1917 and I shall never vote that way again,” McKellar declared.  “I will never vote to send our boys to war again, except when another nation attacks us.”  Senator McKellar contended the arms embargo had been an illusion of safety for the United States.  “I believe from our experience that the present embargo, not the repeal of it, is our first step toward war,” McKellar said.  “Let us take that step.  Let us take no step which involve us war.”

Senator McKellar also engaged one of the leading isolationists in Congress, Senator Gerald Nye of North Dakota, in a brief, albeit telling exchange on the Senate floor.  McKellar wondered if Nye and his cosponsors of the present neutrality legislation had anticipated the law “would aid Germany” when it had first passed in 1935.  Nye replied testily that he had “no thought about who it would aid or injure.”  Senator Nye snapped, “The one thought was to keep out of other people’s wars.”  The fiery Tennessean began swinging his fists by his side and shouted the arms embargo was “aiding Nazism and Communism” while simultaneously hurting the “two great democracies” of Great Britain and France.  Senator McKellar fumed the present neutrality law helped Adolf Hitler “in his war of aggression in Poland, France and England and his plan to be a world dictator.”  McKellar bellowed, “And I don’t intend to vote for something that will aid aggression led by a wild man.”  Senator McKellar spoke of his personal admiration for the German people and added “But the sooner they get rid of this crazy, war-maniacal dictator, the better it will be for them.”  McKellar reminded Senator Nye he had voted for American entry into the First World War and repeated he would never again vote for war unless the United States was attacked.  “I am for peace,” McKellar said.  “That’s why I favor the present bill.”

Senator Hiram Johnson of California rose to sputter, “Hitler will never conquer Europe.  It has never been done by anyone yet.  The closest approach to any was by Napoleon, and to compare Hitler to Napoleon is absurd.”  Johnson insisted irrespective of who won the war in Europe, it would matter little to the United States.

Tennessee’s junior U. S. senator, Tom Stewart, spoke over the radio the same day and sounded much the same theme as McKellar.  “On the proposition of maintaining our peace, I think the American nation is united 100 per cent and for myself, I have little fear of future involvement in foreign wars,” Stewart said.  The senator cautioned against becoming overly excited or “hysterical” as the great majority of congressmen and senators were very much against war.  Stewart urged his listeners to go about their daily lives secure in the knowledge the Congress would not hurl the United States into the European maelstrom.

Debate in the Senate continued and the final test was when Gerald Nye moved to substitute his own bill for that supported by the Roosevelt administration.  Sixty-seven senators voted against the Nye substitution; only twenty-two senators rallied around the Nye bill.  Ten Democrats, nine Republicans, a Farmer-Laborite (Henrik Shipstead of Minnesota) and one Progressive (Robert LaFollette, Jr. of Wisconsin) voted for the Nye substitute; both of Tennessee’s senators voted against the Nye substitution.  By voting down the Nye amendment, a large majority of senators were signaling they favored lifting the arms embargo.  The galleries were filled to capacity as senators debated the amendments.  One amendment offered by Sheridan Downey of California proposed to prohibit the sale of arms to every foreign nation save for those “in the American continents at war with non-American countries”, a proposal beaten back by a vote of 55 – 27.  Senate Majority Leader Alben Barkley of Kentucky proclaimed the vote against the Downey amendment was “a clear cut test of strength” by those senators supporting the administration.  Barkley accurately predicted “we will have even more votes when an effort is made to eliminate the section repealing the embargo.”

Another amendment was offered by some Senate Republicans to prohibit the sale of chemical weapons and poisonous gases, but it failed 54 – 36.  Senator Bennett Champ Clark of Missouri tried to pass two amendments; the first would have barred armed merchant ships of belligerent countries from entering American ports.  That proposal was defeated 65 – 26.  Senator Clark’s second amendment was designed to curtail the executive powers of the President by adding four members of Congress to the National Munitions Control Board.  Clark’s motion failed only narrowly, 45 – 41.

The debate on the neutrality bill had yet to reach its climax.