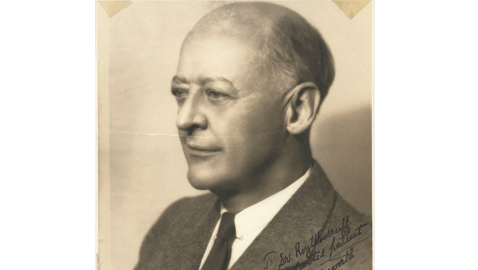 The Tennessee Congressional delegation was lending strong support to the neutrality bill proposed by Secretary of State Cordell Hull and President Franklin Roosevelt.  Congressman Wirt Courtney, who had been elected after the sudden death of Clarence W. Turner, had made his maiden speech in Congress on the neutrality legislation.  Courtney made a dramatic pledge that if circumstances changed and he felt the need to vote for war, he would be one of the first to enlist.  Congressman Courtney had fought in the First World War, enlisting as a private and leaving the service as an officer.

In his maiden speech, Courtney said, “To repeal the embargo and permit our industries to continue the manufacture of airplanes, guns and ammunition, but geared to high production basis would be a great step forward in our national defense.  Should an emergency arise for us, there is the whole organization, experienced, efficient, and ready to fill the need of our government to the full limit of the demand.”  Evidently some of the congressmen were not entirely quiet as Wirt Courtney began speaking, causing Ewing Thomason of Texas to call for order “so we can hear this splendid speech.”  Courtney lamented, “This action is as unprepared today as it was in 1917.  Should we be forced into war, it would take us now, as it did then, a solid year of feverish activity by day and night, entailing the waste of billions, before an American army would be in shape to strike a single effective blow against a well-equipped adversary.”  Much of what Congressman Wirt Courtney came to pass after the Japanese bombed Pearl Harbor.  Courtney’s speech not only drew attention to the freshman lawmaker, but also won him praise from unexpected quarters.  Congressman J. Will Taylor, an East Tennessee Republican, said Courtney’s speech was “a splendid talk.”

Taylor’s reversal of his previous position on neutrality was important; he had not only voted against revising the neutrality bill just months earlier, he had spoken against it.  “Hillbilly Bill” Taylor’s switch was even more important considering the Roosevelt administration could not count on the vote of every Democrat in the House of Representatives.  Once the Republican effort to open the neutrality bill to amendments was defeated, Congressman Taylor notified House Minority Leader Joe Martin of Massachusetts he was returning to Knoxville for a week.  Before departing Washington, Taylor and newly elected Congressman Estes Kefauver met with Secretary of State Cordell Hull about the duty on zinc.  Hull was in the midst of negotiating a treaty with Belgium and both Taylor and Kefauver were anxious that the current $35 per ton duty on zinc not be lowered.

Casting his vote on the neutrality legislation was the last important matter J. Will Taylor would tend to in a twenty-two year congressional career.  The fifty-nine year old lawmaker died at his home in LaFollette, Tennessee just before 4:00 a.m. of a heart attack on November 14, 1939.  Taylor had been ill the previous evening and felt bad enough that his wife telephoned the Congressman’s physician around 10:30 p.m.  Whatever ministrations the doctor gave to J. Will Taylor, they proved to be inadequate as Mrs. Taylor found her husband dead in his bed when she went to his bedroom early the next morning.  Intending to make sure her husband was resting comfortably, Mrs. Taylor discovered her husband had slipped away.  Evidently Taylor had some notion he was seriously ill as a neighbor recalled the Congressman giving instructions to family members in the event “something should happen to me.”

During the Congressional fight over the neutrality bill, Secretary of State Cordell Hull had been pleasantly surprised by President Roosevelt.  That surprise involved Hull’s birthday, although the Secretary of State was an austere man who ordinarily had little use for parties of any kind.  Franklin Roosevelt firmly believed all birthdays should be celebrated, including that of Cordell Hull.  When Hull turned sixty-eight on October 2, 1939, it did not escape the notice of President Roosevelt.  FDR invited Hull to lunch with him and as that was no unusual occurrence, the Secretary of State did not suspect anything being amiss.  When Hull arrived at the White House, he was surprised to find a grinning Roosevelt lighting the candles of a birthday cake.  Hull had claimed he was too busy to celebrate his birthday, but FDR had his way and although the Secretary of State was surprised, he was also quite pleased.

The first week of November brought the final debate over the neutrality law in the House of Representatives.  Majority Leader Sam Rayburn made a closing argument during the debate on behalf of the Roosevelt administration and told his colleagues repealing the arms embargo would eliminate those causes, which “got this country into the war 22 years ago.”  Rayburn praised the ingenuity of the cash and carry provision of the law and wondered, “What’s the picture if we have no legislation at all?”  The Texan said, “We have reckless American citizens traveling on belligerent ships.  We have reckless American ship owners sending ships through danger zones with American cargoes and American sailors.”  Rayburn asked what the reaction of “a great conservative country like mine” would be should an American ship be sunk by a warring power with the loss of “200 or maybe 500 boys – – – innocent ones – – -“ who were “sent to the bottom” of the ocean.  Rayburn answered his own question, saying, “I tremble to contemplate what might be the reaction in this country to the sinking of our ships and the destruction of American lives.”  It was a vivid reminder to House members, virtually all of who could remember the aggressive submarine warfare conducted by the German Empire, which had slowly pulled the United States into the First World War.

Another Texan, Congressman Luther Johnson, ranking member of the House Foreign Affairs Committee, reinforced Rayburn’s argument, saying revising the neutrality law would not make the United States either “a referee nor participant” in the European war.  “We don’t propose to change the war in Europe,” Johnson said.  “We only want to protect the rights and lives of the citizens of the United States.”

Congressman Albert E. Austin of Connecticut, a freshman Republican legislator, rose to say he believed the repeal of the arms embargo would make U. S. entry into the war “not only possible, but probable.”  Austin claimed the people of the United States were “neutral-minded” and “We miserably fail the people if, under the guise of neutrality we willfully translate their desires into intervention.”  Austin certainly voted his convictions, but may well have misread the mood of his district, as he was defeated for reelection the following year.

Another Republican congressman, John Robsion of Kentucky, barked he was against “pulling the chestnuts out of the fire for any country in Europe.”  Kansas Republican Clifford Hope pointed out President Roosevelt had been for an arms embargo in 1937 and had signed legislation enforcing the embargo, but was now for removing the embargo.  Congressman Hope stated world conditions had not dictated Roosevelt’s change of mind, but rather FDR’s reversing himself was because of “a change in the administration’s foreign policy.”

As the final vote approached, the House had to consider a motion by Ohio Republican John M. Vorys to ban exporting “lethal” weapons to nations at war.  It was a reiteration of an amendment the House had passed the previous summer.  Michigan Republican Jesse Wolcott tried to tack on an instruction to the House conferees, who would negotiate any differences between the House bill and the Senate bill, to require a ban on all loans from federal entities to belligerent nations.  Congressman James A. Shanley, a Connecticut Democrat, offered a motion to retain the embargo on the sales of “arms, ammunition and implements of war.”

James W. Wadsworth was a Republican congressman from New York who had served two terms in the United States Senate before being defeated for reelection in 1926.  Wadsworth was elected to the House in 1932 and had been one of only seven GOP members of Congress who had voted against the arms embargo earlier in the year.  Wadsworth was highly respected and well liked by his colleagues; he was also a plainspoken man who declared the current neutrality law was “unworthy of us and potentially dangerous” to the country.  Congressman Wadsworth frankly admitted attempting to legislate neutrality was a difficult thing to accomplish and opined the Senate bill offered the best hope for the American people to keep the United States out of war “if any legislation can.”  Wadsworth’s speech brought many House members to their feet roaring their approval.  House Speaker William Bankhead of Alabama took the unusual step of alighting from the dais to stand in the well to make a personal appeal to his colleagues on behalf of the administration bill.

The House proceeded to vote down the motions offered by Congressmen Vorys, Wolcott and Shanley, paving the way for approval of the conference committee to complete its work.  A delighted President Roosevelt, noting the majority in favor of revising the neutrality act was greater than the administration had supposed, quickly signed the bill into law.  Roosevelt also issued two proclamations, one of which was a restatement of America’s status as a neutral nation.  For those paying attention to commentary by the foreign press, it was impossible to ignore the fact British and French newspapers hailed the action of Congress with jubilation.  Hitler’s Nazi press was utterly silent on the topic.  Italy’s press was likewise silent save for a sullen comment that the action of the United States was likely to prolong the war in Europe.

In the final tally, every member of the Tennessee Congressional delegation voted for the Hull – Roosevelt neutrality bill, save for Congressman Carroll Reece.

Shortly after the House had accepted the Senate bill and sent President Roosevelt the neutrality bill he and Secretary of State had so desperately wanted, J. Will Taylor died.  As a sitting member of Congress, Hillbilly Bill went to Woodlawn Cemetery in LaFollette with appropriate pomp and circumstance.  According to reports in the Knoxville News-Sentinel, some ten thousand mourners attended the final rites for Congressman Taylor.   Several fellow members of Congress, Republicans and Democrats, were led to Taylor’s final resting place by a grim-faced Senator K. D. McKellar.  Senators McKellar and Stewart, as well as Congressmen Albert Gore, Walter Chandler, Estes Kefauver, and Joe Byrns, Jr. came to LaFollette to pay their respects.  While disagreeing on many fundamental issues, Senator McKellar and J. Will Taylor had long had an understanding.  While boarding a train in Nashville to travel to Knoxville, McKellar had sighed “the Republicans lost a great leader in the death of Congressman Taylor.”  One friend, Fred Roberts, an official with the local Chamber of Commerce, recalled, “No letters got prompter attention than those to Bill Taylor, and it’s the same with Senator McKellar.”

Will Taylor never lived to see the greatest war ever fought, but his actions in approving the neutrality act were of great historic significance; for the dictators of Europe and the Empire of Japan, it was the beginning of the end.