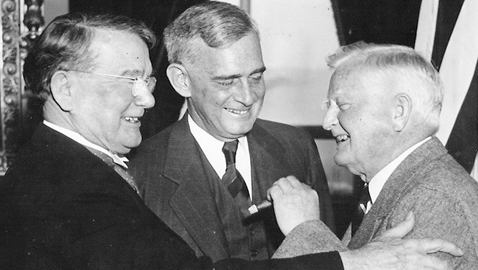 By Ray Hill
Neither President Roosevelt and Secretary of State Cordell Hull intended to retreat from their demands that Congress renew the cash and carry provision of the neutrality law, while also removing the arms embargo on belligerent nations. The noninterventionists and isolationists in Congress, having won the fight in the House of Representative through a coalition of Republicans and Democrats, were ready for a fight. The isolationist bloc in the United States Senate contained some of the Senate’s most able members. Both sides were ready for a prolonged brawl.

On July 7, 1939 thirty-four senators issued a statement they would filibuster the neutrality bill, pledging their unified opposition “to the repeal or modification of the present neutrality law prohibiting the sale or exportation of arms, munitions or implements of war to nations engaged in war.” The statement also declared their determination to prevent President Roosevelt from enjoying any further discretionary powers. “We are against any discretion being lodged in the hands of any chief executive to determine an aggressor or aggressors during any war abroad.” The senators also defined the differences between themselves and the Roosevelt administration. “We believe in real neutrality of our nation in the case of any conflict.” In other words, the noninterventionists in the United States Senate believed they were the bulwarks of preserving peace in America; they genuinely believed in the United States being a truly neutral nation. They suspected President Roosevelt and administration allies would risk war to provide aid to Great Britain and France in the event of war with Germany.

The statement was the result of a meeting chaired by Hiram Johnson of California. The seventy-two year old Johnson was a progressive Republican who was so esteemed in his home state that he usually won both the Republican and Democratic nominations. A formidable orator and respected by his colleagues, Johnson had been the running mate of Theodore Roosevelt in 1912 when the two bolted the Republican Party to run on the Progressive or “Bull Moose” label. The meeting in Johnson’s office was attended by noninterventionists, both progressives and conservatives, as well as Democrats and Republicans. Those senators who attended included Arthur Capper of Kansas, a Republican and wealthy publisher; Gerald P. Nye, a firebrand from North Dakota, who was a rabid isolationist; Henrik Shipstead, the son of Norwegian immigrants who had been elected from Minnesota as a member of the Farmer-Labor party; John Danaher, a Connecticut Republican noted for his fine legal mind; Wallace H. White, a Republican from Maine, a quiet and gentlemanly man with a shock of white hair; Bennett Champ Clark, an able and articulate senator from Missouri; D. Worth Clark of Idaho, the junior colleague of the famed William E. Borah and just as adamantly isolationist in outlook; Rush D. Holt from West Virginia, mercurial and like Gerald Nye, had an appetite for publicity and a burning desire to embarrass the Roosevelt administration; Borah, the “Lion of Idaho” and a living legend to many of his colleagues and most of his constituents; Clyde M. Reed, a freshman senator and former governor from Kansas, personally irascible with a reputation for being querulous; Homer Bone, an acerbic Democrat from Washington State; and Robert LaFollette, Jr., son of the famed Progressive of the same name from Wisconsin.

The battle inside the Senate Foreign Relations Committee appeared to be close; in fact, it appeared to be evenly divided 11 – 11 with the final member of the committee undecided. That member was reputedly Senator Guy Gillette of Iowa, who had been one of the targets of FDR’s unfortunate and wildly unsuccessful purge during the 1938 elections. Other reports indicated the vote stood at 11 – 10 with Walter F. George of Georgia also undecided. Secretary of State Hull was said to be leaning on Senator George, like Gillette, another target of Roosevelt’s wrath in the 1938 primary campaigns. Hull and George were friends and long-time associates and there was a persistent worry George seemed to be inclined to side with the noninterventionists, perhaps a residual of his ill treatment at the hands of the President, who had made a point to campaign against him personally. Senator George opined if indeed thirty-four senators had agreed to oppose revision of the neutrality law it was “highly improbable” that any neutrality legislation would pass the Congress.

As each day slipped away, it seemed the opposition continued to build. Within days after the statement signed by thirty-four senators had been released, fully forty-two senators had announced their own opposition to repealing the arms embargo, including nineteen Democrats.

Senator Bennett Clark of Missouri declared, “The Hull plan to repeal the existing arms embargo on export of arms and ammunition would be substantially an alliance of the United States with Great Britain and France and with Soviet Russia if the latter joins the Paris – London axis. That would put us in alliance with the Communists. I believe the Senate would defeat such a plan.” Hiram Johnson exuded confidence. “I have no doubt that the Hull bill will be beaten,” he said.

The noninterventionists were right to be confident; the Senate Foreign Relations Committee voted 12 – 11 to shelve any revision of the neutrality act, ending the possibility of action during that session of Congress. Both Guy Gillette and Walter F. George voted to postpone any consideration of the neutrality legislation.

Cordell Hull’s Tennessee temper flared and the Secretary of State issued a public statement after meeting with President Roosevelt. Hull said he felt “as I have felt throughout each stage of the consideration of peace and neutrality legislation during this session of congress that the interest of peace and the security of the United States require that we should continue to urge the adoption of the principles of the six-point program” he had originally proposed a few months earlier. Hull reiterated those same six points during a press conference. Reporters noted the Secretary of State looked visibly “disturbed and disappointed.” Days later Cordell Hull’s disappointment deepened when Congressman Sam D. McReynolds of Chattanooga died. McReynolds had first come to Congress in 1922 when Hull was making his own return to the House of Representatives following a two-year hiatus after having been defeated in 1920. The two men became friends and McReynolds had eventually risen through the ranks to chair the House Foreign Affairs Committee. Congressman McReynolds had been an effective ally to the Roosevelt administration, but he was seriously ailing from advanced heart disease. As Sam McReynolds lingered, Sol Bloom had become Acting Chairman of the House Foreign Affairs Committee. Congressman McReynolds died on July 11, 1939.

The death of Sam McReynolds was important in another respect; it left Tennessee with little real influence in the House of Representatives. The two longest serving members of the Tennessee House delegation were J. Will Taylor of the Second District and Carroll Reece of the First District. Both Taylor and Reece had actually arrived in the House of Representatives before Sam McReynolds; Taylor had been elected in 1918 and Reece in 1920. Yet J. Will Taylor and Carroll Reece were Republicans and exercised little clout in the halls of Congress. Jere Cooper, a Democrat from Dyersburg, Tennessee, represented the Eighth District and had been elected in 1928. Clarence W. Turner of the Sixth District had first been elected in 1932; Herron Pearson of the Seventh District arrived following the 1934 election, as did Walter Chandler of the Ninth District, who had come to Congress after E. H. Crump had decided he didn’t much care for serving in the House of Representatives. Albert Gore who represented Cordell Hull’s old Fourth District was a freshman congressman, as was Joseph W. Byrns, Jr., son of the late Speaker of the House of the same name, who represented the Fifth District. Tennessee’s junior U. S. senator, Tom Stewart, was also a freshman legislator with little influence. Fortunately for Tennessee, there was Kenneth D. McKellar. Senator McKellar was one of the more senior Democrats in the United States Senate, ranking member of the powerful Appropriations Committee. In fact, McKellar carried much of the workload for the Appropriations Committee due to the oftentimes-fragile health of the Chairman, brittle little Carter Glass of Virginia. McKellar was a stalwart supporter of the Roosevelt administration and chief dispenser of New Deal patronage in Tennessee. There was hardly a family in Tennessee for whom the senator had not done a favor. A bachelor, McKellar obsessively tended to his duties and despite his seventy years, remained energetic. Senator McKellar had proven he could do more than hold his own during Senate debates and proved to be a wily and resourceful legislator. McKellar had astutely used his perch on the Appropriations Committee to leverage aid to the Tennessee Valley Authority. Outside of Tennessee, TVA was not universally popular and the fight for continuing appropriations for the Tennessee Valley Authority were frequently hard fought and some won by a single vote. Relentless in pursuit of some advantage for Tennessee, K. D. McKellar had long served with Cordell Hull in both the House and Senate and admired the Secretary of State. Senator McKellar would prove to be a valuable ally to Hull in the fight to revise the neutrality act.

Hull’s disappointment and the elation of the isolationists was only temporary as world events rapidly changed the opinion of many congressmen and senators, and more importantly, that of the American people. That change began to occur on September 1, 1939 when German troops and panzer divisions crossed the border into Poland. Adolf Hitler’s invasion of Poland changed modern warfare with the “blitzkrieg.” Both Great Britain and France had a treaty with Poland and declared war on Germany on September 3, 1939. The Soviet Union invaded Eastern Poland on September 17, yet neither Britain nor France bothered to extend the declaration of war to Russia. Poland was gobbled up by Hitler’s Germany and Stalin’s Soviet Union in a matter of weeks. Suddenly there was a pressing need for Congress to reconsider Cordell Hull’s neutrality act revisions. Senator McKellar urged President Roosevelt to call Congress back in special session.

Back home in Tennessee, McKellar was touring the state in anticipation of his 1940 reelection campaign, as well as taking the temperature of his constituents about repealing the arms embargo. McKellar’s esteem for Cordell Hull was readily apparent when he told reporters the Secretary of State was the “best fitted man in the nation for president in case Roosevelt doesn’t run for a third term.” McKellar also bluntly dismissed the notion Adolf Hitler could be appeased. “Hitler would be willing to accept peace terms tomorrow if he gets what he wants in Poland,” McKellar speculated. “But if such should occur that man probably would attack little Romania the next day.” The frequently crusty McKellar was evidently in good humor as he listened to a tale of Congressman Carroll Reece tangling with a custom’s officer, which ended with Reece biting the officer’s ear. The senator laughed and said, “Well, I’m glad he didn’t bite the officer’s ear off.”

While in Nashville, McKellar spent some time with reporters following his return from a brief vacation in New England, who naturally quizzed the senator about neutrality legislation. The plainspoken McKellar flatly declared passing the arms embargo in the first place had been a “mistake.” Senator McKellar insisted the cash and carry provision “should have been passed last summer” by Congress. The senator summed up his own views concisely, “I believe that by refusing to sell munitions to Britain and France we are morally aiding Germany in this war. If we are not neutral in our feelings— and I cannot believe that we are neutral in our feelings — we should assist the countries whom we feel are in the right.”

Once again, the supporters of the Roosevelt administration and the isolationist bloc in Congress would fight over defining American foreign policy with regard to neutrality in a world that had been altered forever.