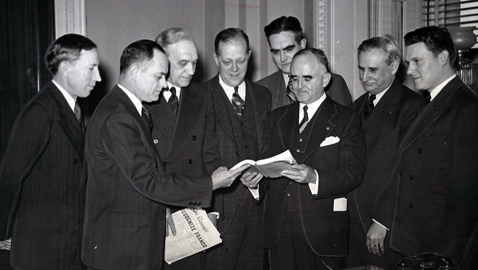 With the outbreak of war in Europe following Adolf Hitler’s invasion of Poland, the United States of America was faced with an unpleasant reality.  Neutrality acts had been passed by the Congress in 1936, 1936 and 1937, but the war between Germany, Great Britain and France was eerily reminiscent of the First World War.  Memories of that bloody conflict and the number of sons who never came home were still fresh in the minds of millions of Americans.  A tidal wave of letters and telegrams flooded the offices of congressmen and senators.  President Franklin D. Roosevelt had spoken to the nation in early September of 1939 and that wonderful voice took people into his confidence as they gathered around their radios to listen.  “I hope the United States will keep out of this war,” Roosevelt said.  “As long as it remains within my power to prevent, there will be no blackout of peace in the United States.”  President Roosevelt acknowledged America’s status as a neutral nation, but raised an important distinction.  “I cannot ask that every American remain neutral in thought as well.  Even a neutral has a right to take account of facts.  Even a neutral cannot be asked to close his mind or his conscience.”

Certainly even in Cordell Hull and K. D. McKellar’s Tennessee opinion was hardly unanimous in favor of repealing the arms embargo.  J. L. Stewart wrote a letter to the editor of the Nashville Tennessean scoffing that “Senator McKellar says the people he talked to in Tennessee are for repeal of the arms embargo.”  The writer opined the “senator possibly talked to his ‘yes’ men who knew how he felt and agreed with him.”  Stewart believed “85 percent of the people in Tennessee are against going into this war for any reason.”  Mr. Stewart felt the “few who talk in favor of the United States getting mixed up in this war did not enlist in the last war, do not intend to enlist in this war, but are in favor of sending someone else.”

Fourteen other residents of Nashville did not agree with J. L. Stewart and wrote to Senators McKellar and Stewart, as well as Congressman Joseph W. Byrns, Jr., to say they strongly supported the idea of revising the neutrality law and were for the cash and carry provision.  Yet they cautioned their representatives exports to belligerent countries should be limited.

Numerous congressmen and senators noticed the cascade of mail they were receiving against repeal of the arms embargo and the opinions expressed by the people they represented.  Many members of Congress had only recently returned to Washington after having been home.  Republican Congressman J. Will Taylor represented Tennessee’s Second Congressional district.  Taylor frankly admitted in late September most of his mail was against repeal of the arms embargo, but “Hillbilly Bill” said he had just come back from Tennessee and had talked to a great many people while home.  Congressman Taylor assured a reporter he was confident the “overwhelming sentiment” of his constituents was in favor of the repeal of the arms embargo.  Taylor pointed to a resolution he had just received from the American Legion post in Scott County, which endorsed the cash and carry provision and flatly stated “the present law unjustly favors the totalitarian powers.”  Freshman Congressman Albert Gore said much the same as Taylor.  Gore had spent five week inside his district and said his own folks were “overwhelmingly in favor of repeal of the embargo.”  Doubtless what Gore said was true, if for no other reason the Fourth District was that which had been represented by Cordell Hull for decades.  Residents of Tennessee’s Fourth District were extraordinarily proud of native son Cordell Hull and it would have been surpassing strange had they not backed the Secretary of State in his efforts.

Walter Chandler, congressman from Tennessee’s Ninth District, had come to Washington to represent Shelby County after E. H. Crump had tired of life in the nation’s Capitol.  Chandler explained he had received exactly two letters and two telegrams.  The signatories of the telegrams were opposed to repeal, as was the writer of one of the letters; the writer of the second letter favored repeal.

Senator McKellar paid very close attention to the mail coming into his office.  Much of McKellar’s personal popularity with Tennesseans was derived from his attention to their problems and his intervention on their behalf.  The senator had a standing rule that every letter from Tennessee had to be answered the same day it arrived, if only to acknowledge it and tell the recipient McKellar would write further when he had more information.  Upon returning to his Washington office for the special session of Congress, McKellar found some 500 letters opposing repeal awaiting him.  The senator was quick to point out only 350 of them were from Tennessee.  Having traveled widely through Tennessee before returning to the Capitol, Senator McKellar had only encountered a single person who expressed opposition to repealing the arms embargo.  McKellar surmised those constituents who favored repeal had not bothered to write him, as his own views in support of repeal were so widely known in Tennessee.

The Nashville Tennessean thought it only natural Senator McKellar would receive more mail than any other member of Congress from Tennessee “in view of his high position in senatorial circles and because he draws from the entire state…”  Yet Senator Tom Stewart’s mail was “comparatively light as compared with McKellar’s.”  A recent speech by Franklin Roosevelt had evidently rallied Tennesseans behind the President and Secretary of State Cordell Hull.  Some influential Tennesseans had expressed the opinion a majority of the state’s citizens had opposed any revision of the neutrality laws before Roosevelt’s speech; following FDR’s radio talk, the tide turned.  That opinion was likely overstating the case, as it failed to take into account home state pride in Cordell Hull; both Hull and Senator McKellar were highly popular in Tennessee and the Tennessean readily acknowledged the influence of the Secretary of State in convincing the people of Tennessee to change their minds.  The Tennessean noted “the fact the administration neutrality program bears the name of Hull is said to have influenced many Tennesseans to favor the program.”

The difference in what congressmen and senators heard back home and the mail being delivered to their offices was not a Tennessee phenomenon.  Senator John E. Miller of Arkansas had observed the same thing after having been in his own home state.  Miller said he recently spoke to a Rotary Club in Little Rock comprised of “300 leading business men and publishers” and announced he favored removing the arms embargo.  Senator Miller reported he quickly received approval from all over Arkansas for his stand, although most of his mail remained solidly against repeal of the embargo.  Miller noted much of the mail against repeal of the embargo was worded identically.  Clearly, congressmen and senators were receiving mail generated by special interests.

Senator McKellar did not waste much time once the special session convened.  On September 25, McKellar introduced a resolution to repeal the neutrality act.  The Tennessee senator declared the neutrality act was “in direct conflict with our freedom of the seas policy” and the law should be repealed “outright.”

Senator McKellar’s proposal, going much farther than even what the Roosevelt administration had proposed, took away the breath of many of his allies and horrified the isolationists.  In his typically blunt fashion, McKellar spoke an inconvenient truth when he said the neutrality law should be repealed as the government was “paying virtually no attention to it” in any event. McKellar said “no great government should pass a law and then disregard it”, noting that was “one of the principal reasons that I voted to repeal the Prohibition law.”

McKellar had been invited to a White House conference with President Roosevelt along with other senators and there was immediate speculation by the press the Tennessean had introduced his resolution at the behest of the administration.  Senator Robert A. Taft of Ohio cried, “Repeal of the Neutrality Act would be equivalent to authorizing the President to conduct an undeclared naval war and I am opposed to it.”

While introducing his resolution, Senator McKellar addressed the Senate, candidly saying, “We made a mistake in passing the neutrality laws as they have done no good and have merely cluttered up a situation that was already bad.”  McKellar made his point that the neutrality laws passed by Congress had hampered the United States in its freedom of the seas policy, reminding his colleagues, “We have fought two wars in behalf of this policy; one with Great Britain in 1812-14, which we lost with the exception of the Battle of New Orleans…”  McKellar cited the other war fought for the freedom of seas policy had been the First World War, “Which we won and then lost in the peace conference” and again “in the Disarmament Conference in 1922.”

Senator McKellar noted the freedom of the seas had been a policy followed by the United States “for more than 100 years.”  McKellar summed up his thoughts succinctly, saying, “I do not believe the neutrality laws will keep us out of war.  As long as we keep them on the books Germany will, no doubt, regard them as full evidence we are afraid of her.”

Few of the senators in the Senate Chamber wished to tangle with the peppery Tennessean, although New Hampshire Republican Charles Tobey did rise to sneer the neutrality laws had been “enacted under the whip and spur of the present Administration.”  Styles Bridges, Tobey’s colleague from New Hampshire and also a Republican, got up to remind his colleagues he had been one of only six senators to vote against the original neutrality act and he still believed its passage was a mistake.

Following his brief speech on the Senate floor, McKellar was interviewed by longtime newsman Bascom Timmons.  McKellar insisted the program supported by the Roosevelt administration offered the best chance for America to avoid involvement in “this unrighteous, uncalled-for, devilish war.”  McKellar forecast the repeal bill would be approved “by a two-to-one majority in the senate” and repeated his claim the existing law helped Hitler’s Germany.  “Therefore, as the present embargo act favors Germany, I approve the repeal of that act (which German propaganda is trying so hard to retain.)”  “We cannot now sell to Canada an airplane or a truck if intended for war purposed,” McKellar complained.

“We all want peace,” McKellar said.  “There is no absolute guarantee of peace, of course, but we want to take the most effective steps possible to secure it.”  Senator McKellar told Timmons he was “utterly opposed to war” and confessed he had received a “few very bitter letters” on the subject, but excused the writers as he believed they would not have been written had the writers been acquainted with the facts.

One of McKellar’s close friends, as well as one of the most admired men in Tennessee, Sergeant Alvin C. York, hero of the First World War, announced his support for the Roosevelt – Hull plan.  York spoke over the radio and praised the President.  “Our duty is to uphold him in his determination that the American desire for neutrality shall not be changed.”  Sergeant York warned his audience, gently reminding them, “But let us not close our eyes to possibilities already on the war horizon.  If war becomes necessary – and when and if, and only if, it becomes necessary – then let us stand behind the President solidly.”  Although Sergeant York was for peace “because, like the President, I hate war,” he was not for peace at any price.  “I do not hate war to the extent that I would sacrifice the standing and national honor of my country to obtain an unsatisfactory, unstable peace – – – failure of peace, such as was the conference at Munich last fall.”

The tide was beginning to turn.