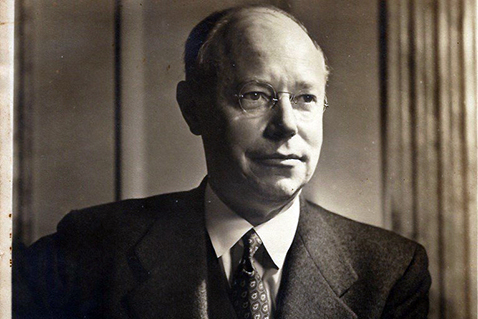 The Tennessee Congressional Delegation and the Taft-Hartley Bill

Only two members of Tennessee’s congressional delegation in the House of Representatives had voted against the labor bill sponsored by Congressman Fred A. Hartley, Jr. of New Jersey.  Hartley was the chairman of the House Labor Committee and his counterpart in the U.S. Senate, Robert A. Taft of Ohio, was sponsoring the companion bill in that body.  The House had voted 308-107 to pass Congressman Hartley’s bill.  Tennessee’s congressional delegation in the House was composed of ten members; eight Democrats and two Republicans.  Congressman Dayton Phillips, who had succeeded longtime representative Carroll Reece in Tennessee’s First Congressional District, had voted against the Hartley Bill in the House.  The other vote cast against the Hartley Bill from Tennessee was that of Congressman Estes Kefauver of Chattanooga.  Every other member of the House of Representatives from Tennessee, including Albert Gore, voted in favor of the Hartley-Bill.

The fight over the labor legislation moved on to the United States Senate where the Volunteer State was represented by Kenneth D. McKellar and Tom Stewart.  McKellar was a Memphis lawyer who had first been elected to Congress in 1911 and was the first person to be popularly elected to the United States Senate by the people of Tennessee.  Tennesseans kept McKellar in the Senate for thirty-six years.  Like McKellar, Tom Stewart was by vocation a lawyer and had been district attorney for a collection of counties in Middle Tennessee.  Stewart was first elected to the U.S. Senate in a 1938 special election following the death of Senator Nathan L. Bachman.  Stewart had defeated incumbent Senator George L. Berry, who had been appointed to fill the vacancy caused by Bachman’s death and Congressman J. Ridley Mitchell of Cookeville.

Tom Stewart had only narrowly beaten back the determined challenge of Edward Ward “Ned” Carmack, son of the late U.S. senator of the same name, whose statue even then sat outside of Capitol Hill in Nashville.  Carmack’s candidacy was strongly supported by the publisher of Tennessee’s most liberal daily newspaper, the Nashville Tennessean.  Silliman Evans, the publisher of the Tennessean, took a course diametrically opposed to that of Senator McKellar and E. H. Crump, the leader of the Shelby County political organization.  Evans was likely jealous of the power and influence wielded by the Memphis Boss and hoped to replace him.  There is considerable evidence to suggest Evans wished to be the “kingmaker” in Tennessee’s politics.

When K. D. McKellar sought another six-year term in 1946 at age seventy-seven, a few would-be candidates floated balloons in the hope they could attract the necessary support to challenge the venerable senator.  Chattanooga Congressman Estes Kefauver briefly flirted with the notion of challenging Senator McKellar inside the Democratic primary, but soon thought better of it.  Finally, Ned Carmack announced he was running.  McKellar won better than 60% of the vote against Carmack without once coming home to campaign.  The peppery senator had engaged in a very public spat, widely carried by Tennessee newspapers, with the CIO-PAC, who had attempted to summon McKellar to discuss the coming primary election.  The plainspoken senator refused the invitation in a blistering letter.

While Wallace White of Maine was the nominal majority leader in the United States Senate, the real leader of the GOP majority was Senator Robert Taft of Ohio.  The Taft-Hartley Bill was one of those pieces of legislation positively pregnant with political implications for the future.  The question of curbing the power of unions in the country was certain to affect the coming 1948 presidential election and everybody involved in politics knew it.  Yet the sacrifices made by the people during the Second World War and the labor unrest had caused a highly negative reaction from the public.

As the Taft-Hartley Bill endured several test votes in the Senate, it quickly became clear the legislation had more than enough votes to pass.  Senator Joseph Ball of Minnesota, a former reporter who had first been appointed to the United States Senate by crusading young governor Harold Stassen, was very much for the Taft-Hartley Bill, but he also worked hard to modify those provisions he felt were too extreme.

When William Green, leader of the American Federation of Labor, and John L. Lewis, the formidable and eloquent head of the United Mine Workers, met with several GOP senators, Lewis had held forth at length upon the topic of economics.  Senator George W. Malone, a rigidly conservative Republican who was remarkably friendly to organized labor, waited until John L. Lewis had finished his oration before wondering, “Just what are your objections to our bill?”  Lewis patiently then repeated his dissertation on economics.  Finally, eighty-one-year-old Senator Arthur Capper, who was largely deaf, asked the labor leader, “Mr. Lewis, is there anything you want up on the Hill?”

Senator Harley Kilgore of West Virginia, a strong supporter of organized labor, tried to stop the GOP onslaught with an amendment to delay consideration of the Taft-Hartley Bill for a week.  A motion was made to table Kilgore’s amendment, which passed by a vote of 60-17.  Every Republican voted against Kilgore’s amendment, while 17 Democrats joined them in moving it to the table.  Senator Kilgore launched a scathing attack on the Taft-Hartley Bill, as well as the National Association of Manufacturers, which was backing the labor legislation.

The Bristol Herald Courier published an open letter addressed to Senator McKellar concerning the Taft-Hartley Bill.  After greeting the senator as “a believer in the Great Jefferson platform of government – – – from a brother citizen of the great ‘Volunteer’ State of Tennessee,” J. Frank Johnson of Johnson City condemned the legislation.  “As a working man, trying desperately to educate my fine family, in a fine religious and educational manner, I am soliciting your most influential authority in damning and killing to the death of the so-called Hartley-Taft-Ball labor bill.”  Johnson wrote he was a proud member of the International Typographical Union, Local # 426.  Johnson pleaded with the senator “in the name of the working man (who just wants a fair living), and to be able to educate his family for the good and welfare of our glorious nation” to kill the bill.  Frank Johnson stated he believed the Taft-Hartley Bill “is trying desperately to degrade the working man.”

Johnson concluded his letter to the senator by writing, “We, the working class, are the spokes of the wheel of the nation’s (organized labor) desire to keep the big wheel rolling.  This Hartley Bill (HR-3020) or any similar bills will head the entire nation to a downward depression – – – WORSE THAN IN THE 30’s.”  One of the two House members who had voted against the Hartley Bill in the lower House, Dayton Phillips, represented J. Frank Johnson.  Although long known as a solidly Republican district, as well as home to Republican National Chairman Carroll Reece, there was a significant labor presence in Tennessee’s First Congressional District.

Two other Republican senators tried hard to moderate the Taft Bill inside the Senate Labor Committee.  Irving Ives of New York and Wayne Morse of Oregon both fought to stop Taft from allowing employers to seek injunctions over certain incidents.  While Senator Morse hailed it as a “great victory,” Florida Democrat Claude Pepper, who was also opposed to the provision, predicted the measure would pass the full Senate.

As the Senate slogged through the myriad of amendments, 31 Republicans were joined by 12 Southern Democratic senators in voting to restrict bargaining.  On the other side were 16 Republicans and 28 Democrats.  The clerk of the Senate at first announced a tie vote, but following a demand he check the roll, it was announced the vote was 44 against and 43 for.  The amendment being considered would have kept national unions from dictating the terms of contracts to their local chapters across the nation.

One complication during the Senate debate over the Taft-Hartley Bill, at least as far as Tennessee was concerned, was the uncertain health of its senior United States senator.  Senator McKellar had recently experienced what was described as a “fainting spell” at his desk.  The seventy-eight-year-old senator was taken from his office by ambulance to Bethesda Naval Hospital where doctors said he had not suffered a heart attack, nor was the senator’s blood pressure abnormally high.  Marshall McNeil, the Washington, D.C. news correspondent for the Memphis Press-Scimitar, acknowledged, “For all his age, Sen. McKellar had looked very well recently and has been carrying on his duties in his usual way.”  McKellar’s brief illness was at first rumored to be serious, but McNeil noted the senator had been attending sessions of the Senate, “occasionally taken part in debate and answered all roll and quorum calls.”  Marshall McNeil wrote only the day before, Senator McKellar had made a short speech after he had requested an editorial from a Washington newspaper be printed in the Congressional Record regarding a ”Voice of America” broadcast.  McKellar also commented on Carl Aldo Marzani, who had been charged with having lied about his presumed “Communist connections” in order to get a federal job.  McKellar made a point of noting the jury had been composed of both white and black citizens, which the senator thought indicated the ‘value of our age-old system of trial by jury.”  McKellar scoffed at the notion he had been “on my death bed.”  Even Marshall McNeil grudgingly admitted the old senator was one who recovered from his illnesses with astonishing alacrity.

The senator’s doctor thought McKellar had been working too hard and with the intense Washington heat, had fainted while working in his office on a Saturday morning.  “He wants to go back to work tomorrow,” McKellar’s doctor told a reporter, “but I’m not sure we’ll let him go that quick.”

Not to be denied, McKellar dictated replies to letters to secretaries over the telephone.  When Senate Republicans refused to agree to allow an absent GOP senator “pair” with the Tennessean, McKellar got up out of his hospital bed, put on his clothes and summoned the vice presidential limousine, which was his to command as the Senate’s presiding officer in the absence of an actual vice president.

Both of Tennessee’s senators, K. D. McKellar and Tom Stewart voted for an amendment by Joseph Ball to outlaw boycotts and jurisdictional strikes, which lost on a vote of 62-28.  Likewise, Senators McKellar and Stewart voted in favor of an amendment by Bob Taft, which had the effect of “omitting the power of injunction to halt boycotts and other unlawful combinations.”  That proposed amendment passed the Senate 65-26.  McKellar and Stewart were on the losing end of a vote on another amendment proposed by Senator Joe Ball, which would have abolished the closed shop.  That amendment failed on a vote of 57-21.

When Senator James E. Murray of Montana, a strong opponent of the Taft-Hartley Bill, proposed an amendment that would have substituted his own labor bill for that of Bob Taft, both Tennessee senators voted against it.  Murray’s amendment failed overwhelmingly on a vote of 73 against with only 19 senators voting in favor of it.

On the final passage of the Taft Bill in the United States Senate, both Kenneth McKellar and Tom Stewart voted in favor it; the bill passed on a vote of 68 ayes and 24 nos.

Back home in Tennessee, apparently outside of those members of organized labor, there was little dissent in the votes cast by the two U.S. senators on approving the Taft Bill.  Indeed, the newspapers in Tennessee were far more interested in Senator McKellar’s ongoing dispute with TVA Board Director David Lilienthal and the Atomic Energy Commission, where President Harry Truman proposed to put Lilienthal.  Considering all but two members of Tennessee’s House delegation had supported the Taft-Hartley Bill, it was reflective of sentiment in the Volunteer State.

Yet the fight was not over.  President Harry Truman vetoed the Taft-Hartley Bill.