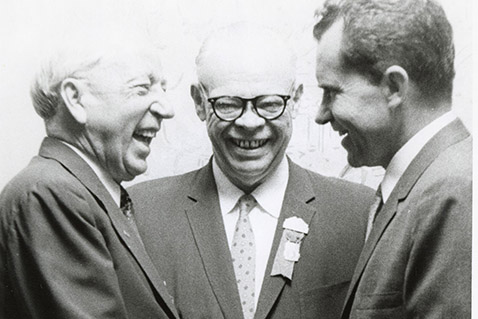 Tennessee had gone Republican in both the 1952 and 1956 presidential elections.  Volunteer State Democrats had been especially shocked when Adlai Stevenson had lost Tennessee in 1956 as home-state U. S. senator Estes Kefauver had been the vice presidential candidate.  Tennessee Democrats had been especially shaken by the loss of Shelby County to the Republicans in 1956.  Ed Crump, once the undisputed master of Memphis and Shelby County, had died in October of 1954 and his machine had begun to rapidly deteriorate and fall apart.  Yet, even with the enormous appeal and personal popularity of President Dwight D. Eisenhower, old habits die hard and Tennesseans had supported the GOP presidential ticket only narrowly.

Democrats approached 1960 with hope and great expectations.  Tennessee’s Estes Kefauver thought of waging a third battle for the Democratic presidential nomination but gave up the idea to run for reelection to his seat in the United States Senate.  Some Tennessee Democrats were fearful John F. Kennedy’s Catholicism would become an unspoken issue in the Volunteer State.  Some were old enough to remember when Herbert Hoover had won even the Democratic stronghold of Davidson County (Nashville) over New York governor Alfred E. Smith.  Smith was a wringing “wet” (meaning he favored repealing/ending prohibition) and a Catholic.  Lyndon Johnson, the powerful Majority Leader of the United States, had declared his own presidential candidacy at the last minute and enjoyed support from some highly influential Tennesseans, not the least of which was Governor Buford Ellington.  The Tennessee delegation arrived at the Democratic National Convention and voted to support Johnson on the first ballot under the unit rule, meaning the entire delegation would cast their ballots for the Texan.

Governor Ellington candidly admitted he had done “all we can” for the Majority Leader.  “I’ve told both the Senator and Sam Rayburn that we little people have shot the works,” Ellington told a reporter, “and that from now on it is up to them to carry on at the top level.”  Edward B. Smith, associate editor of the Knoxville News-Sentinel , wrote a regular column and noted some members of the Tennessee delegation grumbled it appeared Senator John F. Kennedy would win on the first ballot and advised the Volunteer State should hop on the bandwagon before it rolled off in the distance.  Another last-minute candidacy was declared by former Illinois governor Adlai Stevenson, who had been the Democratic Party standard-bearer in both 1952 and 1956.  There were some Democrats who argued Stevenson deserved another chance without the enormously popular Eisenhower running for the Republicans.  Senator Albert Gore disagreed and made no secret he thought it would be a serious mistake to give Stevenson a third presidential nomination.  In a short speech before his fellow Tennesseans, Gore said all of the leading candidates for the Democratic presidential nomination were personal friends and believed any one of them could win the general election.  Some considered Gore’s speech to be opening the door for Tennessee to support Kennedy.  One Tennessee delegate wore an “All the Way With LBJ” button on his lapel with another saying, “Switch Today to JFK.”

Republicans had coalesced behind Vice President Richard Nixon.  The Republican National Convention was more of a coronation than a contest.  Nixon selected former U.S. Senator Henry Cabot Lodge Jr. as his running-mate which seemed a curious choice.  Lodge had lost his Senate seat in 1952 to a young congressman named John Fitzgerald Kennedy.

While Democrats were excited about Kennedy’s candidacy, they worried privately the candidate’s religion would be a big liability in Protestant Tennessee.  Kennedy’s campaign committee in Tennessee was composed of a Methodist, a Presbyterian and three Baptists.  Democrats pointed to the closeness of Eisenhower’s victories in Tennessee; despite the former general’s appeal and personal popularity, he had only carried the state by a total of 8,218 votes combined in the elections of 1952 and 1956.  Tennessee Democrats grew increasingly worried when they received letters like that of O. D. Johns, pastor of the Main Street Church of Christ in Milan, who wrote Senator Gore, “A very powerful force has influenced you to turn on your church leaders and many of your fateful [sic] supporters.”

Richard Nixon was too shrewd a politician not to know Tennessee was once again in play.  Congressman Carroll Reece was introduced that day by State Representative James H. Quillen, who would be the congressman’s successor in Tennessee’s First Congressional District.  Congressman Reece declared the Nixon- Lodge ticket “the most able and experienced men to seek high office in the 20th Century, not including re-election campaigns.”  That same day, September 27, Carroll Reece hurried from his upper East Tennessee district to Memphis, to greet Vice President and Mrs. Nixon.  It was raining in Memphis when the Nixons arrived and according to the Nashville Banner some 25,000 people cheered the couple.  Reece introduced Nixon to the vast audience and Nixon acknowledged Republicans were the minority party in Tennessee when he said, “Judge us not on the basis of the label we wear, but on what’s behind the label.”

Tennessee’s weather was not as kind to Richard Nixon as it had been to John F. Kennedy, when the Massachusetts senator had come to the Volunteer State six days earlier.  Kennedy had been greeted by sunshine and mild temperatures while Nixon faced a chilly wind with rain.  Richard Nixon was also aggressively seeking the votes of Black citizens.  Nixon told Memphians he fully supported the civil rights plank in the Republican platform.  “In this area,” Nixon said, “all Americans must move forward.  We must leave none behind.”  Richard Nixon noted Kennedy had not mentioned civil rights while campaigning in Tennessee.  The Vice President said a candidate had “a responsibility to talk the same, North, East, South or West.”  “I regret my opponent, since his nomination, has not done that,” Nixon added.  Vice President Nixon also praised the Tennessee Valley Authority (in sharp contrast to what Senator Barry Goldwater would do four years later), saying, “I think that not only should TVA be kept as it is but it should be expanded as need to serve the present area.”

John F. Kennedy’s visit to Tennessee was a foray into the heart of Republican East Tennessee.  Kennedy’s plane landed at Tri-Cities Airport thirty minutes late.  According to state troopers, the crowd was estimated to number 11,000 people.  Kennedy was accompanied to East Tennessee by his sister, Eunice Kennedy Shriver.  John Kennedy’s appeal to female voters was no less true in Tennessee than elsewhere.  After one woman shook hands with the senator, she cried, “Oh, I got to touch him!”  Some of the younger ladies had arrived at the airport as early as 6:00 a.m. to get a better view of the Democratic nominee.

Newspaper publisher Carl Jones introduced Governor Buford Ellington who in turn introduced Senator Kennedy.  Kennedy hit precisely the right note, saying it was appropriate for his campaign swing to begin in the area.  “Virginia was the home of Thomas Jefferson, the founder of the Democratic Party.  Tennessee and North Carolina produced Andrew Jackson who built the party up to our country’s most progressive political body,” Kennedy told his listeners.  “We are coming into dangerous and difficult times,” Kennedy warned.  “The Democratic Party is not promising a life of ease, but one full of responsibilities and hazards.”  Kennedy subtly reminded his audience of Tennessee’s Democratic past.  “The reason Franklin Roosevelt, Harry Truman and Woodrow Wilson were so successful overseas is because they were successful at home,” Kennedy said.  “The hand of friendship extended by Roosevelt to other countries was the same that brought you the TVA.

“The Marshall Plan was just an extension of the Fair Deal,” Kennedy said, asking Tennesseans to compare the records of the country’s two political parties.

Richard Nixon was working hard to replicate Dwight D. Eisenhower’s success in carrying Southern states which had formerly served as a firewall for the national Democratic Party.  The Eisenhower-Nixon ticket had carried Virginia, Tennessee, Texas and Florida in 1952.  Eisenhower had come within less than 5,000 votes of carrying South Carolina.  In 1956, Eisenhower won Tennessee, Virginia, Kentucky, Florida, Texas, and Louisiana.  By early October, Richard Nixon had made more than twice as many visits to Southern states as had John F. Kennedy.  Pat and Richard Nixon returned to Nashville to campaign on October 6, 1960.  Once again, James Stahlman, publisher of the Nashville Banner, introduced Nixon to the 17,000 people gathered to hear the GOP presidential candidate.  Among those greeting the Nixons at Nashville’s airport were Congressmen Carroll Reece and Howard Baker, Nashville Banner publisher James Stahlman, and Zephaniah Alexander Looby, head of the Nixon-Lodge Minority Committee for Tennessee.  Looby had been born in the British West Indies and had immigrated to the United States when he was a fifteen-year-old orphan in 1914.  Looby earned degrees from Howard University, Columbia University’s School of Law and New York University.  Looby was also a Republican member of Nashville’s City Council for twenty years, from 1951 to 1971.  Z. Alexander Looby’s house had been bombed by arch segregationists on April 19, 1960.

“Four years ago a small but vocal cult adopted as its snide slogan, ‘I don’t like Nixon, but I don’t know why.’  When Dick Nixon spoke in Nashville, I told you I DID like Nixon and I DID know why,” Stahlman thundered.

Vice President Nixon noted John F. Kennedy had quoted Andrew Jackson when he had visited Tennessee earlier.  “Here is what Andrew Jackson really said,” Nixon began.  “’My countrymen will never find me arresting measures which encroach on the rights of the states or lend to the centralization of our federal government.’”

Both of Tennessee’s GOP congressmen were on hand when Vice President and Mrs. Richard Nixon arrived in Nashville.  Carroll Reece and Howard Baker (father of the future U. S. senator) were seated on the platform while Nixon spoke.  Both congressmen were interviewed by members of the news media.

Carroll Reece predicted Richard Nixon would carry Tennessee by 50,000 in the general election.  The congressman told a reporter he believed Shelby County would once again go Republican and speculated the vice president’s majority in East Tennessee would top 125,000 votes.

Republicans in Knoxville celebrated “Pat Week”, honoring the vice president’s wife.  Mrs. Rubye Biddle, co-chair of the Nixon-Lodge campaign in Knox County urged women to participate in a parade for “Pat Week.”  Among those riding in the parade were Mrs. Roy Lotspeich, publisher of the Knoxville Journal; Mrs. Lois Duncan, wife of Knoxville’s mayor (and future congressman); and Mrs. Irene Baker, Tennessee’s Republican National Committeewoman and wife of the congressman (and also a future congresswoman).  Congressman Howard Baker was in Nashville to speak to the Republican Women of Davidson County who were preparing for “coffees” in precincts across the county’s 106 polling places.  Looking over the impressive number of women gathered, Congressman Baker marveled, “I can see why elections are won by women.”

Carroll Reece’s predictions proved to be conservative.  Richard Nixon carried Tennessee by more than 75,000 votes.  Once again, the GOP presidential ticket carried Shelby County and Nixon’s visit (along with Kennedy’s religion) helped the Republicans in Davidson County where JFK only outdistanced Nixon by about 7,000 votes.  Richard Nixon easily carried Knox and Hamilton Counties.  To illustrate how many Democrats likely voted for Nixon over Kennedy, consider Senator Kefauver won 594,460 votes to 481,453 for JFK.  Kefauver won more votes in Tennessee than Nixon while there were 1,051,792 votes cast in the presidential race in Tennessee, only 828,516 citizens voted in the senatorial race.  Some 223,000 Tennesseans opted not to vote in the U. S. Senate race even though both parties fielded candidates, granted GOP nominee Bradley Frazier was not as serious or as good a candidate as Dan Kuykendall and Howard Baker would prove to be in 1964.

Yet the change in Tennessee’s voting pattern had begun.  Richard Nixon carried Tennessee again in 1968 and 1972.  So, too, would the Volunteer State play a pivotal role in the 2000 election between George W. Bush and native son Albert Gore, Jr.