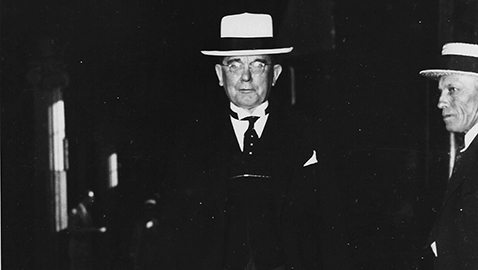 By Ray Hill
February 5, 1937 was a Friday and President Franklin D. Roosevelt publicly announced his intention to ask Congress to enlarge the United States Supreme Court.  Roosevelt was fresh from a smashing reelection campaign in 1936, which saw the president carry every state in the union, save for Maine and Vermont.  The Democratic majorities in Congress were huge; there were only sixteen Republicans sitting in the United States Senate.

President Roosevelt summoned Congressional leaders to the White House, including Senate Majority Leader Joe Robinson of Arkansas, Speaker William Bankhead of Alabama, Majority Leader of the U. S. House of Representatives Sam Rayburn, and the chairmen of both the House and Senate Judiciary Committees, Hatton Summers of Texas and Henry Fountain Ashurst of Arizona.  FDR outlined his proposed bill, which would give the president the right to name a new justice of the Supreme Court for each sitting justice over the age of seventy.

President Roosevelt had been angered when the Supreme Court struck down a provision of the National Recovery Act passed by Congress, which would have added new controls to the pricing and production of oil.  The Court voted 8 – 1 in striking down the provision.  On May 27, 1935, the Supreme Court issued three decisions which struck down three New Deal measures.  Other adverse ruling followed, including decisions that invalidated the price-control and hours and wage provisions of Bituminous Coal Conservation Act.  The Supreme Court also invalidated the processing tax provision in the Agricultural Adjustment Act.

Ironically, at least two conservative Supreme Court justices had indicated their wish to retire, but found it impractical because of the New Deal Economy Bill passed in 1933 that had cut pension benefits.

FDR told the stunned legislators he was sending a bill to Capitol Hill increasing the size of the Supreme Court.  It was the first they had heard of Roosevelt’s intentions and only Senator Ashurst seemed to like the idea.  As the legislators returned to Capitol Hill, Congressman Summers told his colleagues, “Well, boys, here’s where I cash in my chips.”

Summers’ adamant opposition to the bill meant it would have to go to the Senate first and to sweeten the pot, President Roosevelt had promised Senator Joe Robinson the first appointment to the Supreme Court, a fact which appalled many New Dealers.  Public reaction was not what President Roosevelt thought it would be; despite the huge majorities in Congress enjoyed by Democrats, many inside FDR’s own party were at best lukewarm to the idea.  Republicans quickly assumed a strategy of allowing the Democrats to tear their own party apart internally, saying little during the debate.  Roosevelt had anticipated swift approval of his legislation and it soon became readily apparent his refusal to build support for the idea prior to announcing his legislation was a grave mistake.

Republican Senator Warren R. Austin of Vermont said, “It is an ostentatious request for power to pack the courts.”

Joseph F. Guffey, the Democratic boss of Pennsylvania and the state’s junior U. S. senator, said, “I’m 100% for it.”

Tennessee’s senior senator, Kenneth D. McKellar, said, “I think it probably would be better to enlarge the Supreme Court.”

Tennessee’s junior senator, Nathan L. Bachman, a former justice of the Tennessee Supreme Court, was ominously utterly silent.  Close friends of Senator Bachman felt he was not favorably disposed to the court-packing plan.  Yet both the court issue and Tennessee politics changed in a heartbeat.  The heartbeat belonged to Nathan L. Bachman and his heart ceased to beat on Friday, April 23, 1937.  Senator Bachman had gone back to the hotel where he and his wife lived in Washington, D. C. that evening.  Mrs. Bachman was on her way to their home on Lookout Mountain.  Sometime that evening, Senator Nathan Bachman died of a sudden heart attack.

Bachman had first come to the United States Senate in 1933 when he had been appointed by Governor Hill McAlister to succeed Cordell Hull, who had been selected by Franklin Roosevelt to serve as Secretary of State.  Bachman’s appointment suited Senator McKellar fine and the two got along quite well together.  Bachman had to run for the remaining two years of Cordell Hull’s Senate term in a 1934 special election.  Senator Bachman was challenged by Congressman Gordon Browning, who had first considered running against McKellar who was up for reelection the same year.  Browning later admitted he could not secure a single pledge of support from any prominent Tennessean and the congressman decided it was foolish to run against the formidable McKellar.  Ignoring the unwritten rule no Grand Division in Tennessee would have both of Tennessee’s seats in the U. S. Senate, Browning, who was a West Tennessean, ran against the more vulnerable Bachman.  Congressman Browning complained Bachman’s campaign was being run out of Senate McKellar’s Washington office and while he ran a credible race, he lost the Democratic primary.

Browning ran for governor in 1936, got the support of E. H. Crump, leader of the Shelby County political machine, and defeated a candidate backed by Senator McKellar inside the Democratic primary handily.  It was up to Governor Browning to appoint a successor to the late Senator Bachman.  Browning was besieged by applicants and supporters of a myriad of prospective candidates.  The governor was called to the White House for a private conversation with President Roosevelt.  There were strong rumors that Cordell Hull wanted the appointment to return to the U. S. Senate.  Hull felt marginalized by FDR and was unhappy as Secretary of State.  Neither Browning nor President Roosevelt ever divulged the substance of their conversation, but FDR did say that he had not told the governor whom to appoint, but rather who not to appoint.

In the end, Browning’s choice was both curious and obscure.  At least two members of the Tennessee Congressional delegation coveted the Senate appointment; Congressman Sam D. McReynolds of the Third District very much wanted to go to the Senate.  McReynolds chaired the House Foreign Affairs Committee and would likely have been a strong candidate in the special 1938 election, but Governor Browning ignored him.  Fourth District Congressman J. Ridley Mitchell was ambitious to move up to the Senate and had displayed considerable political skill in getting to Congress and staying there.  Browning’s choice for the senatorial appointment was George L. Berry of Rogersville, long-time president of the International Printer’s and Pressman’s Union.  The fifty-three-year-old Berry had never been elected to any office in Tennessee and labor was not especially strong even in Democratic primaries.

Berry had been active in raising money for FDR’s 1936 reelection campaign and had been appointed to a minor post in the New Deal.  On May 10, 1937, Senator McKellar put his arm through that of George L. Berry and escorted him down the aisle to the Senate rostrum where the oath of office was administered by Vice President John Nance Garner.  Supporters of the New Deal were confident Senator Berry would back FDR’s court-packing plan.

McKellar became increasingly more outspoken in his support of President Roosevelt’s proposal.  When Senator Burton K. Wheeler, a progressive Democrat from Montana, read a letter from Chief Justice Charles Evans Hughes, the result was a grievous blow to much of Roosevelt’s argument for enlarging the court.  Hughes was something of an Olympian figure with his magnificent white beard and stately presence.  Charles Evans Hughes had served as a progressive and reform governor of New York, an associate justice of the U. S. Supreme Court, the Republican nominee for president of the United States in 1916, and Secretary of State under two presidents.  Hughes was recognized as one of the best attorneys in the country and his letter was an expert piece of political craftsmanship, a fact acknowledged by Harold L. Ickes, FDR’s New Deal Secretary of the Interior.

Ickes confided to his diary just how effective the letter written by Hughes, which had also been signed by Justice Louis Brandeis, the first Jew to be appointed to the Supreme Court and an appointee of President Woodrow Wilson, was politically.

“This letter,” Ickes wrote, “without expressing itself as to the policy of the president’s plan, sought to prove in great detail that the court did not need any extra help to handle its work since it kept right up with its docket.  It then went on to the opinion that more judges would make for inefficiency and delay.

Few members of the Senate wanted to engage in a dispute with the Chief Justice, but Senator K. D. McKellar was one of the most senior Democrats in the U. S. Senate.  McKellar represented a Democratic state where FDR was hugely personally popular.  The peppery Tennessean did not hesitate to challenge the Jovian Chief Justice and opened up an attack on the letter written by Hughes on the Senate floor.  McKellar’s speech was the first reply to Hughes by any supporter of the Roosevelt administration.

Senator McKellar flatly declared the Hughes letter did not address President Roosevelt’s “challenge.”  The Chief Justice had contended increasing the size of the Supreme Court would “impair” the court’s efficiency, rather than enhance it.  McKellar took issue with Chief Justice Hughes’ contention, declaring it was “filled with excuses.”  McKellar noted the high court had dismissed 87% of the petitions for writs of certiorari presented.

McKellar told his colleagues that President Roosevelt had made it “perfectly plain” that “the court does not and apparently cannot give about 87 percent of the certiorari cases the attention that such cases are entitled to receive.”

The Tennessean blistered the Chief Justice, demanding to know why Hughes refused to tell “the people of this country” precisely how the Supreme Court administered the applications for writs of certiorari it received.  The Supreme Court’s actions in refusing to act publicly were “un-American,” McKellar thundered.

“These certiorari cases should be considered like other cases,” McKellar cried.  “Star chamber proceedings have been done away within every enlightened country.  Secrecy of method in presenting facts is un-American and antiquated and should be done away with.”

Senator McKellar said 731 applications for writs of certiorari had been made to the Supreme Court in 1935 and pointed out the Chief Justice had failed to explain “how the records of those 731 dismissed cases are examined or passed upon or decided.”

Senator McKellar said it had been President Roosevelt’s belief the process  “was not right and I believe the fair thinking people of America agree that it is not right.”

McKellar invited Chief Justice Hughes to write yet another letter, explaining just exactly how the court determined which cases to hear and how it disposed of writs of certiorari.

As Senator K. D. McKellar helped to bolster support for President Roosevelt’s plan to enlarge the U. S. Supreme Court, newly appointed senator George L. Berry remained eerily silent.  New Dealers remained confident Berry would vote with the president, as he had been a staunch ally of the New Deal throughout Roosevelt’s presidency.  Most believed Berry had been appointed to the United States Senate by Governor Gordon Browning precisely because he would vote with Roosevelt.

Berry’s silence was a portent of things to come.