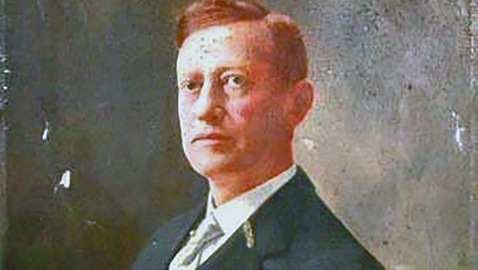 Malcolm Rice Patterson enjoyed a meteoric rise in Tennessee politics until the consequences of his own actions ended his career.  Redheaded, thin, with angular features, Malcolm Patterson was known throughout Tennessee as a dynamic and gifted speaker.  There were those of his admirers who thought Patterson was one of the greatest orators of his time.   Patterson had been named Hamilton Rice Patterson when he was born, but his father, Josiah, changed his name to “Malcolm” when the boy was still very young, yet he would be known as “Ham” to friend and foe alike until the end of his life.  Patterson earned a reputation for political courage and speaking his mind early in his political career and earned the nickname of “gamecock” for his pluck among his fellow Democrats.

The trajectory of his career in Tennessee politics followed that of his greatest political rival, Edward Ward Carmack.  Carmack, by profession a newspaperman, was also redheaded, volatile and deadly when using either his tongue or his editorial pen.  It was E.W. Carmack who ended the congressional career of Patterson’s father, Josiah, when he unseated Colonel Patterson in the 1896 election.  Even after winning the election, few thought Carmack would be seated by the Republican majority, but with the help of a young lawyer named Kenneth D. McKellar, and making the speech of his life, Edward W. Carmack won the vote to be seated as a Member of Congress.  When Carmack was elected United States senator for Tennessee by the legislature in 1900, Malcolm R. Patterson campaigned for and won Carmack’s House seat.  Congressman Patterson was reelected in 1902 and became a candidate for governor in 1906.

Governor James B. Frazier had been reelected in 1904, along with seventy-eight year-old U. S. senator William B. Bate.  Within days of having taken the oath of office for a fourth time, Senator Bate was dead from pneumonia.  A host of Tennessee’s ablest politicians wanted Bate’s seat in the United States Senate, including two prominent former governors: Robert Love Taylor and Benton McMillin.  Evidently, Governor James Beriah Frazier also wanted to the Senate seat and the legislature quickly elected him to serve essentially a full term to succeed William B. Bate.  “Our Bob” Taylor loudly denounced the haste with which Frazier was elected to the Senate and charged three men with attempting to control Tennessee’s Democratic Party.  According to Taylor, Senator E. W. Carmack, James B. Frazier and John I. Cox were the conspirators who had helped to deny him a seat in the U. S. Senate.  Cox had been Speaker of the State Senate and when Frazier resigned the governorship, Cox became Acting Governor.  Bob Taylor was hardly the only Democrat in Tennessee who was outraged by what many voters perceived as questionable political bargain.  Many believed Frazier had been elected to the Senate to unfairly give John I. Cox the governorship.  Congressman Malcolm Patterson took advantage of the situation by announcing his own candidacy for the governorship.  Patterson challenged Governor Cox for the Democratic nomination in 1906; Patterson’s task was especially difficult as at that time, the nomination was not decided by popular election, but rather through a state convention.  Patterson and Cox waged a fierce battle for delegates to the convention and when the congressman finally won the support of the Davidson County delegation, he received the nomination.  That was the first crack in the foundation of Tennessee’s Democratic Party and throughout the tenure of Malcolm Patterson as governor, it would eventually grow to a deep divide.  Oddly, that same year the Tennessee General Assembly had agreed to be bound by the results of a special primary election for the United States Senate.  The victor of the special primary would be elected by the legislature.  Former governor Robert Love Taylor campaigned against incumbent Senator Edward Ward Carmack.  Carmack was swimming against the political tide as well as Taylor’s immense personal popularity.  Taylor, usually “the Apostle of Sunshine,” departed from his customary repertoire of wit, songs, and anecdotes to turn his wrath against Senator Carmack, whipping his opponent caustically at every opportunity.  Carmack gave as good as he got, but was defeated by a decisive margin in the popular vote by Taylor.

The legislature, still feeling the displeasure of Tennessee’s electorate, duly elected Robert L. Taylor to the U. S. Senate.  Governor John I. Cox, bitter at having narrowly lost the Democratic nomination, refused to support Malcolm Patterson in the general election.  Patterson won, but the chasm inside Tennessee’s Democratic Party was growing ever wider.

Carmack challenged Patterson for the Democratic nomination for governor in 1908 and the campaign quickly became both hard fought and deeply personal.  Carmack claimed Patterson had built an effective machine inside Tennessee and his campaign buttons featured a picture of the candidate along with a slogan of “Shall the People or the Machine Rule?”  The main issue between the two candidates was that of prohibition.  Edward W. Carmack was the champion of the “dry” forces, while Governor Patterson was the spokesman for the “wets”, or at the very least local option.  The contest between Malcolm Patterson and E. W. Carmack at the state convention tore asunder friendships or long-standing, ruptured families, and sowed additional strife inside Tennessee’s Democratic Party.  The Nashville Tennessean tried to dismiss the bitterness by acknowledging Patterson’s nomination, claiming the party was united against the Republicans in the fall election, while admitting there were a few “soreheads and discontented Democrats” in the state.  After a raucous convention, the Carmack supporters realized Patterson had the votes and moved to nominate the governor by acclamation.

Malcolm R. Patterson won the general election while Edward W. Carmack returned to his profession as editor of Luke Lea’s Tennessean.  Carmack evened some scores by editorially roasting some of his political opponents, chiefly Colonel Duncan B. Cooper, publisher of the rival Nashville American.  Not surprisingly, Colonel Cooper quickly tired of being bathed in the editorial acid of Carmack’s pen.  The Colonel sent Carmack a warning to stop, which the editor ignored.  It was not long before all parties were traveling about Nashville armed.  In November of 1908 Edward W. Carmack happened upon Duncan B. Cooper, who was accompanied by his son, Robin.  Evidently all of them were carrying pistols and Carmack drew his and fired.  Shots were exchanged, but Robin Cooper was apparently a much better marksman, hitting the editor at least three times.  One of the wounds was minor, but two hit Carmack in the heart and the head, killing him.  E. W. Carmack fell dead into the gutter of a Nashville street.

Patterson used an ingenious argument to explain his pardon of Colonel Cooper.  Patterson pointed out Robin Cooper had been acquitted by a court for E. W. Carmack’s murder, but the governor insisted he had read every sentence of the Duncan Cooper trial proceedings and had concluded it was Robin who had fired the shots that had killed the former senator.  Furthermore, had Duncan Cooper killed Carmack, it would have been in self-defense.  To defuse the argument the governor had pardoned a warm personal friend, Patterson said why should he do less for a friend than he would an enemy under the circumstances?

Edward Ward Carmack’s killing split Tennessee’s Democratic Party wide open and the breach would not soon heal.  Patterson charged ahead, intent upon winning a third two-year term as governor.  The governor had enough influence to win the nomination at the state convention once again, but his opponents kept up a steady drumbeat of opposition throughout the state, especially the Tennessean.  Referring to Patterson as the “pardoner extraordinary,” the Tennessean charged the governor with being power mad and “bossism.”  Denouncing “aristocratic thuggery and gutter scoundrelism,” the Tennessean flayed Patterson, saying his administration thrived “in criminally besotted politics” as well as “murdering men it could not cajole, hooting the law, outraging decency, corrupting the courts of justice, defying the mandates of juries, browbeating supreme judges…”  It was all a part of the “evil oligarchy in which Malcolm Patterson and his crew have degraded the state of Tennessee,” causing Tennesseans to wallow “in the mire of disgust and reprobation.”

When a majority of Tennessee’s Supreme Court justices formed an Independent ticket to seek reelection, Governor Patterson promptly fielded his own slate of candidates.  The August primary saw the Independent ticket win by about 45,000 votes, indicating the governor was likely in trouble.  The Republicans, sensing blood in the water, nominated an able candidate in Ben W. Hooper.  Patterson had released a statement saying his “friends had expressed a strong wish that I should again be a candidate, and I would gladly escape the bitterness and the foul assaults which assail me.”  Patterson confessed he “owed a great deal to those who assisted me when I struggled for the office against what seemed overwhelming odds” and claimed “I have deeply felt the injustice which has been done to me and through me to my friends and to the democratic party.”  Patterson flatly said he was “unwilling also to retire under present conditions” and stated nothing could influence him to change his mind.  Realizing he was in trouble, Patterson offered to “waive my title to the nomination” and “restore it to the people” by entering “any kind of a primary, to be held in any way the opposition may elect…”  The governor boldly said he was willing “to meet any competitor in such a primary on the stump in joint discussion and answer every charge which has been made against me.”  Governor Patterson said his “only condition” was “that the successful nominee be supported in the November election by all who participate in the primary.”  Patterson was quick to claim, “I am representing not my personal ambitions, but the party that has honored me, and with it I will go to victory or defeat.”

By September of 1910, even Malcolm Patterson could see the handwriting on the wall.  Patterson released a public letter withdrawing as a candidate for governor.  The governor said he was withdrawing his candidacy in the interest of harmony and in the hope the Democratic ticket would be successful in November.  Tennessee Democrats, realizing the combination of Independent Democrats and Republicans posed a serious threat to electing another governor, begged Senator Robert L. Taylor to run for a fourth term as chief executive of the Volunteer State.  Taylor, who had tried to get to Washington for years, was extremely reluctant to accept the gubernatorial nomination, but eventually yielded to pressure from his party.  Even Bob Taylor was not enough to stem the tide of the “fusionist” movement.  Taylor lost to Republican Ben W. Hooper in the general election, a rejection that broke “Our Bob’s” heart and stunned virtually everyone.

Democrats blamed Malcolm Patterson for the defeat.  Patterson had originally been elected governor as a reformer, but had instead built up a strong organization personally loyal to himself.  The Tennessean ran a banner on its editorial page daily through the fall election, quoting Malcolm Patterson as saying, “I’d would rather vote for a straight Republican than a crooked Democrat.”  The Tennessean added its own quote: “So would we.”  With the election of Ben W. Hooper, Luke Lea’s Tennessean gave full credit for the defeat to Malcolm Patterson.  “The Democrats of Tennessee, by their election of the Republican Hooper, have redeemed the pledge they made when Republicanism joined with them to crush the indecency and the violence of Patterson and Pattersonism.”  “Any other course would have been dishonor,” the Tennessean intoned.

Malcolm Patterson was consigned to the hellish exile of practicing law in his home city of Memphis, but the former governor waited for the moment to make a political comeback and vindicate himself before the voters of Tennessee.