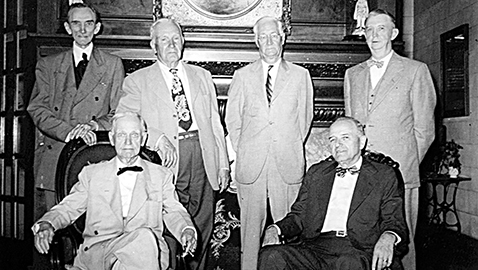 Thomas Clarke Rye was twice governor of Tennessee.  From rural West Tennessee, Tom C. Rye had little formal education, a fact he readily admitted.  “Subscription schools were the only ones we had then, so I didn’t go very regularly and stopped altogether when I was 17 years old,” Rye said.  The future governor must have been quite bright as he went to Charlotte, Tennessee where he studied law with his uncle, Thomas C. Morris.  Rye’s uncle was quickly impressed with his nephew’s ability as Morris and another lawyer were arguing about fine points of real estate one Sunday morning.  The conversation awakened young Rye and his uncle came into his room and said, “Tom, you’ve been reading Washburn’s text on real property.  Maybe you can help us out, but be sure to shave and dress before you come out.”  Tom C. Rye later recalled, “They must have thought I was a slow dresser, because before I put in an appearance I slipped out the window, ran to the law office, got the book and looked up all of the answers to the questions under discussion.  Then I casually settled all their problems, practically quoting from the very words of the book.”

Uncle Tom Morris stared at his nephew and finally said, “I don’t see how you remember that material, boy.  I always thought it rather dull.”  The future governor chuckled, remembering his uncle “bragged about it for weeks, and I felt nothing short of a genius.”

Tom C. Rye enjoyed a lengthy legal career and while it was hardly unusual for an attorney to do well in politics, the future governor was not the typically colorful politician of his time.  Dignified, although retaining a homespun air that served him well when meeting people, Tom C. Rye had a serious way about him.  While many successful politicians were expert in the art of ridicule, Tom C. Rye had a self-deprecating humor; he liked to say he quite nearly never became a lawyer.  He took his oral examination for the Bar on his 21st birthday and recalled, “They asked me three questions and I got so mixed up I missed four.”

When Tom C. Rye returned to Camden, Tennessee, he married seventeen year-old Bessie Arnold and they were together for the rest of his life.  “But do you think we had a honeymoon?” Bessie Rye wondered years later.  “Tom only had 50 cents in his pocket and it took that to move my trunk from my mother’s house to a friend’s home, where we stayed a couple of weeks before setting up housekeeping.”

The Ryes moved to Paris, Tennessee in 1902, but Tom Rye remembered Camden fondly.  He thought Camden “a great little place, that started improving as soon as I left.”

Only eight years after moving to Paris, Tom C. Rye was elected district attorney general.  Rye’s political rise was swift.  Tennessee’s Democratic Party had been coming apart at the seams for several years, first over the question of prohibition and then during the administration of Governor Malcolm R. Patterson.  Patterson was an unapologetic believer in local option, rather than prohibition.  Patterson was regarded as the leader of Tennessee’s “wets” and his political opponents denounced him as a tool of the liquor lobby.  A brilliant orator, Malcolm R. Patterson gave as good as he got.  Former U. S. senator Edward W. Carmack, the white knight of the prohibitionists in Tennessee, challenged Patterson for reelection inside the Democratic primary in 1908.  Carmack had defeated Patterson’s father to win a seat in Congress and the two men cordially hated one another.  As might be expected, it was an especially bitter battle for the nomination, which Patterson eventually won.  Carmack resumed his profession as the editor of the Nashville Tennessean.  The redheaded editor delighted in dipping his pen in acid and excoriating his political enemies in editorials.  One of his victims, a former employer, Colonel Duncan B. Cooper, the publisher of the Nashville American, did not especially care to be spit roasted in print and issued a dire warning to Carmack.  Feelings were so heated, both Carmack and Colonel Cooper traveled about Nashville armed.  A chance meeting between Carmack, Colonel Cooper and Cooper’s son Robin proved to be fatal for the editor.  Shots were exchanged and Edward W. Carmack lay dead in the gutter, hit three times.  A court acquitted Robin Cooper, and Governor Patterson boldly pardoned Duncan Cooper.  If the killing of Edward W. Carmack had caused outrage amongst many Tennesseans, Patterson’s pardoning of Colonel Cooper led to a furious frenzy of almost statewide hysteria.  Patterson was forced to withdraw as a candidate for a third two-year term as governor and while Democrats turned to the most popular Democrat in the state, U. S. Senator Robert Love Taylor, the unthinkable happened.  Independent Democrats joined with Republicans and elected a Republican governor, Ben W. Hooper.  Worse was still to come; the same combination of “fusionists” elected a new United States senator in 1911, promoting Luke Lea, owner and publisher of the Nashville Tennessean to the nation’s Capitol.  Democrats tried to dislodge Governor Hooper in 1912, nominating Benton McMillin, “the old warhorse” of Tennessee Democracy.  Hooper beat McMillin and the fusionists elected another United States senator, John Knight Shields, who was Chief Justice of the Tennessee Supreme Court and an Independent Democrat.  Within two years, Tennessee Democrats had lost the governorship and both seats in the United States Senate.

When Governor Ben Hooper sought a third two-year term in 1914, it was imperative to Tennessee Democrats to heal old wounds and find a candidate who could garner the support of all Democrats in the state.  They nominated Tom C. Rye.

Rye proved to be a unifying candidate for Tennessee Democrats and narrowly defeated Governor Hooper in the general election.  Even former fusionists like Luke Lea gave hearty support to Rye’s campaign.  Tom C. Rye proved to be a popular governor and won reelection in 1916.  As governor, Rye proved to be a stickler for enforcing the law.  Rye supported the “ouster bill”, which helped to remove E. H. Crump as mayor of Memphis for not enforcing prohibition laws.

It seemed only logical that Rye would run for the U. S. Senate in 1918.

The incumbent, John Knight Shields, was an irascible East Tennessean and many Democrats believed the senator was not supportive enough of President Woodrow Wilson.  Much of the senatorial campaign would center around which candidate would be more supportive of President Wilson and his administration.  Governor Rye ran as an unabashedly pro-Wilson candidate.  The United States was fighting on the side of the Allies in World War I and Governor Rye’s son Paul was serving overseas as a first lieutenant.  Most Tennesseans were filled with patriotic fervor supporting the war effort as well as President Wilson.  Rye announced he would be a candidate for the Democratic nomination for United States senator on May 28, 1918.  Rye’s announcement acknowledged he would conduct his campaign “in such manner as to comport with the true ideals of Tennessee” and vowed he would not forget “that the hearts of our people are with the boys in the line of duty.”

Politics being politics, not everyone was pleased with Governor Rye’s declaration of candidacy.  The Crossville Chronicle groused “in the face of so much talk of laying aside politics” why would Rye decide to run for the Senate and “muddy the waters”?  The Chronicle sniffed, “Gov. Rye was never a big man, but he has tried as best he knew how to serve the people as governor.”  The Chronicle thought that no real achievement as “his party is with him and no active opposition is in evidence from the opposing party.”  The Crossville Chronicle supported Senator Shields who, in the Chronicle’s opinion should simply be returned to Washington without a fuss.

Tom C. Rye had every reason to believe his campaign for the United States Senate would be successful; he had twice been nominated and elected governor of Tennessee.  John Knight Shields had never been popularly elected to the U. S. Senate, as he was the last man ever elected by the legislature to the Senate.  Rye was well known for his rectitude, sense of fairness and had been an able chief executive.  Shields was cantankerous, a poor public speaker, and had managed to antagonize not only President Wilson, but also many of his own political appointees.  Advertisements prominently displaying the governor’s picture began appearing in newspapers across the state.  The campaign broadside featured the slogan: “He has made good every pre-election pledge.  He has kept faith with the people.  He will stand by our President.”

It was Kenneth McKellar who likely saved John Knight Shields from defeat that year.  Senator Shields telephoned McKellar from his home in Tennessee and urged him to see President Wilson.  Shields had heard Wilson was going to publish a letter stating the senator had not been his friend nor a friend to his administration.  Wilson’s popularity was such that an open letter to the people of Tennessee would have been catastrophic to Shields’s reelection campaign.  McKellar hurried to the White House and the President confirmed he intended to write a letter flatly stating John Knight Shields was not his friend.  McKellar begged, pleaded and cajoled Wilson not to write the letter.  McKellar left and got what he thought was a commitment from Senator Shields to support the President.  McKellar returned to the White House and reiterated a promise made by Senator Shields to support Wilson.  President Wilson gently insisted John K. Shields would never be a friend to him or his administration, but he did not write the letter and Tom C. Rye lost the Senate race, 66,389 to 55,845.

Rye left office in 1919 and returned to his home in West Tennessee.  Years later, Rye admitted, “Being governor is the most thankless job on earth and I never did like it very much.”  At the time, the governor’s mansion was located near where the War Memorial Building stands today.  “I can count on the fingers of my hand all the nights I slept during the war,” Tom Rye remembered.  “I answered the telephone as many as 25 times during the night.  People who didn’t want to go up the hill to the capitol would wait to call on me at night.”

After his defeat in the Senate race, President Wilson offered Rye an appointment to the Court of Customs and Appraisals, which the former governor turned down.  In 1922, Rye was elected Chancellor of the Eighth Judicial District.  In 1940, Rye agreed to have his name entered once again to seek reelection as Chancellor, but drew an opponent in J. B. Avery of Alamo.  Rye’s only condition upon running once again was that he have no opposition; when Avery qualified to run, Rye withdrew.  Seventy-eight years old at the time, Rye said, “I realize at my age I cannot afford to enter into a campaign.”  Avery was defeated by another former governor, Gordon Browning.

Tom Rye had repeatedly broken his hip in his twilight years, once while alighting from a street car when he was hit by an automobile.  Rye was content in retirement, sitting on his porch or looking out the window while he smoked his “smelly old pipe.” During his final illness, the former governor fell once again and was thought to have broken his hip for a third time.  The ninety year-old governor was too weak to move to a hospital and quietly died in his bed.

Aside from the Wilson administration, another point of contention between the senatorial candidates was the issue of women’s suffrage.  Tennessee’s junior senator, Kenneth McKellar, was an ardent supporter of voting rights for women.  Governor Rye, like McKellar, believed in giving women the right to vote.  Senator Shields was far from enthusiastic over the idea.