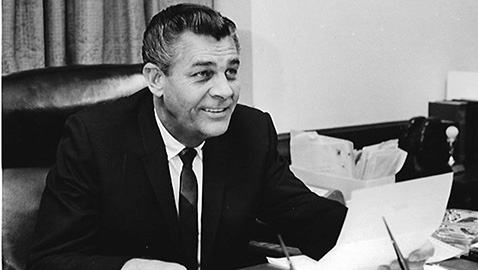 By Ray Hill
Following the unexpected death of Senator Estes Kefauver, jockeying to run in the 1964 special election to serve the remaining term years of Kefauver’s term came down to Congressman Ross Bass of Pulaski and Governor Frank Clement. There seemed to be some possibility incumbent senator Herbert Walters of Morristown might run, but few thought it likely. Walters had been Tennessee’s “Mr. Democrat” for decades and aside from one term in the Tennessee House of Representatives, the seventy-one-year-old millionaire businessman had never run for elective office. Walters had been a stalwart of Senator Kenneth McKellar’s political organization and the Morristown Democrat had warmly supported Frank Clement against Governor Gordon Browning in 1952. The personal relationship between Herbert S. Walters and Frank Clement was as warm as their political rapport.

Another possibility was former governor Buford Ellington. Ellington had been Clement’s Commissioner of Agriculture throughout much of Governor Clement’s six-year tenure during the 1950s. Indeed, Buford Ellington was able to win a multi-candidate gubernatorial primary largely on the strength of the Clement political organization in 1958. Yet, there was a permanent chill between the two men. Whether Ellington was pondering the possibility of running in the 1964 special election for the U. S. Senate, or perhaps eyeing the seat of Senator Albert Gore was unknown.

Clement waited to see what Walters would do, while Congressman Ross Bass crisscrossed the state in a series of “nonpolitical” speaking engagements. When Bass spoke at the Madison Kiwanis Club at the Patterson Restaurant, the topic was largely civil rights. “We in Tennessee are moving now to insure that all races can live together in a peaceful community,” Bass told the Kiwanians. “And I believe the whole nation should.” The Congressman went even a bit farther, telling the members of the audience, “If a man is a citizen of the United States, I believe he should be afforded the opportunity of using all the facilities of the public community.”

“We send men of all races overseas to fight for our flag, and all are accepted everywhere they go in foreign countries. It should be the same in America,” Bass said. The Congressman referred to President Lyndon Johnson, who a couple of months earlier had assumed the presidency after John F. Kennedy had been assassinated in Dallas. “If we don’t support Johnson on civil rights – – – which is inevitable anyway – – – we don’t deserve a Southern president for another hundred years.”

As Congressman Bass told reporters he would make a “final and irrevocable” decision about the Senate race by February 17, 1964, newsmen quizzed him about the other potential candidates. When asked who he thought his opponent would be in the Democratic primary, Bass replied, “Either the governor of Tennessee or someone of his choosing.” When asked whether Senator Walters might run, Congressman Bass said, “The governor’s influence will have some bearing on his decision.” “What about former governor Buford Ellington?” one reporter yelled. “I don’t think he would run unless he’s the governor’s choice,” Bass retorted.

Ross Bass had defined the Senate race in Tennessee to largely one depending upon Frank Clement. Yet the governor was virtually silent on the topic of the Senate race. Clement had made no overtly political moves since the death of Estes Kefauver. There were those who firmly believed the governor would not be a candidate in the 1964 special election, preferring to wait until the expiration of his term in 1966 to be a candidate. Whoever won the 1964 special election for the United States Senate would have to run for a full six-year term again in 1966. Therein lay the dilemma for Frank Clement. If he chose not to compete in the 1964 senatorial campaign, he would remain governor for another two years, but he also risked the possibility the incumbent would be almost impossible to beat by 1966.

Neither Congressman Ross Bass nor Governor Frank Clement paid much attention to Tennessee Republicans. No Republican had ever been popularly elected to the United States Senate in Tennessee’s history. Yet there was reason to believe the GOP might be a factor in the 1964 election. Young William E. Brock had surprised Tennessee Democrats when he won the 1962 election after Wilkes Thrasher, Jr. defeated incumbent congressman James B. Frazier, Jr. in the Democratic primary. All three of East Tennessee’s congressional districts were occupied by Republicans in 1963. Nor was the growing strength of the GOP confined solely to East Tennessee. Congressman Clifford Davis, the last vestige of the old Crump machine in Shelby County had quite nearly been toppled from office by a Republican in the 1962 election. Perhaps even more troubling was the fact after Frank Clement had won the 1962 gubernatorial nomination inside the Democratic primary, he had faced an independent challenge from William R. Anderson, former Captain of the famed Nautilus submarine and Republican nominee Hubert Patty. Clement had won a bare majority in the general election, while Anderson won a third of the statewide vote. While Republican nominee Patty had not been a threat to Clement’s triumphant return to the governor’s mansion, it was plain to see the ties that had so tightly bound many Tennesseans to the Democratic Party were binding ever more lightly.

The home folks in Ross Bass’ city of Pulaski evidently were certain the congressman would be a candidate for the U. S. Senate as they gathered at a $10 per plate dinner at the Pulaski Elementary School. While he did not declare his candidacy, Bass told cheering supporters, “I would like to announce to you that I will not be a candidate for re-election to the House of Representatives.” Bass heavily promoted his work on behalf of the first significant cut in the income tax in the country’s history while his supporters passed around bumper-stickers reading “Ross Bass for U. S. Senate.” Just a day before Ross Bass was to make his formal announcement of candidacy the Nashville Tennessean ran a profile of his wife, Avanell. Avanell Bass was a beautiful woman, as a former Powers model would likely be; however, Mrs. Bass was quite an accomplished woman and served as her husband’s Chief of Staff in Washington. The fashionable and intelligent Avanell Bass would prove to be quite an asset to her husband.

True to his word, Congressman Ross Bass officially announced he would be a candidate for the United States Senate on February 17, 1964. Bass said he would be a candidate for the seat once held by “my late beloved friend and colleague, Sen. Estes Kefauver.” Bass cautioned his supporters he would still remain active in the House of Representatives and was a warrior in President Lyndon Johnson’s war on poverty. His senatorial campaign would be “secondary” for such causes. “I would be in Washington to cast my vote on such measures,” Bass told his supporters. “We have pockets of poverty here in Tennessee which must be wiped out and I’ll do my part on the issue.” Speaking at the Andrew Jackson Hotel in Nashville, Bass said his experience in the House of Representatives would be invaluable to Tennesseans in the Senate. “It shall be my purpose to represent the people of Tennessee with vitality and vigor – – – to protect and promote their interests and purposes at the national level in government…I am running for the Senate to broaden my base of public service – – -not for any political power or self-purpose; not to defeat anyone because of personal dislike, but because of a continuing ambition and desire to serve all the people of my beloved native state of Tennessee.”

Congressman Bass drew applause from his audience when he predicted President Lyndon Johnson would be overwhelmingly re-elected. Saying he knew LBJ quite well, he found himself “compatible with President Johnson’s ideals, and I will have no problem working for his programs in promoting the interests of Tennessee.”

Following his announcement of his candidacy in Nashville, Bass flew to Memphis where he opened his West Tennessee campaign. The congressman claimed the support of the late Senator Kefauver’s backers; while attending a luncheon in the Bluff City, Bass endorsed a plan dear to many Memphians. Bass said he would support the plan to open Tennessee as an international seaport via the Mississippi River from New Orleans to Memphis. A few days later Ross Bass was in Knoxville, speaking on the University of Tennessee campus to enthusiastic Young Democrats.

Back in Washington, D. C., ultra-conservative Virginia congressman Howard Smith was attempting to slow down the civil rights bill. Smith shrewdly sought to include women’s rights in the bill, saying he wished “to prevent discrimination against another minority group, the women.” Congressman Emanuel Celler of New York snorted women were not a numerical minority. In a sugary voice, Smith agreed with Celler that women were indeed not a numerical minority, yet that simply made their plight all the worse. Smith cautioned his colleagues, “I just want to remind you here that in this election year it is pretty nearly half of the voters in this country that are affected, so you had better sit up and take notice.” Congressman Ross Bass jumped up and declared, “I am for women. I want the record to show that I am for both the unmarried and the married women.”

It was consideration of the civil rights bill that Senator Herbert S. Walters used as much of the reason he would not be a candidate when he made his announcement the last of April 1964. Speaking at a news conference, Senator Walters said, “I could not, in good conscience, even attempt to divide my time between this important legislation and a campaign.”

Walters did use the occasion to denounce press reports he had some kind of arrangement with Governor Clement not to be a candidate for the U.S. Senate. “I want to say as strongly and emphatically as I can…there is no truth whatsoever to these stories,” Walters snapped. “There is not now and never has been any so-called ‘deal’.” Walters, who described his political philosophy as being somewhere between that of highly conservative Virginia Senator Harry F. Byrd and ultra-liberal Minnesota Senator Hubert Humphrey, said he would not back either Bass or businessman M. M. Bullard as his successor in the U. S. Senate. Walters had come out against the civil rights bill, but so had Tennessee’s senior U. S. senator, Albert Gore.

Not long before Walters made his announcement he would not be a candidate for the U. S. Senate, the senator had said he was still considering a campaign. Ross Bass was one of those who promoted the idea there had been some kind of understanding between Frank Clement and Herbert Walters when the former had appointed the latter to succeed Estes Kefauver. When asked by reporters whether he thought Clement would run for the Senate, Bass replied, “I don’t know whether Gov. Frank Clement will run. It just depends on whether Walters made a deal with him for the appointment.”

The Tennessean, profoundly opposed to Frank Clement, promptly published a scathing editorial claiming Senator Walters had been “shoved out” in anticipation of a “Clement grab” for the senatorial nomination. Perhaps even more hurtful was a devastating political cartoon on the Tennessean’s editorial page depicting the arm of Governor Frank Clement, clothed in a suit of dollar signs, grasping for the Capitol dome. The Tennessean furiously lamented the same Senate seat once occupied by Estes Kefauver had become an object “in a disgraceful power play” by Governor Clement.

The race for the Democratic nomination for the United States Senate in 1964 was about to begin in earnest.