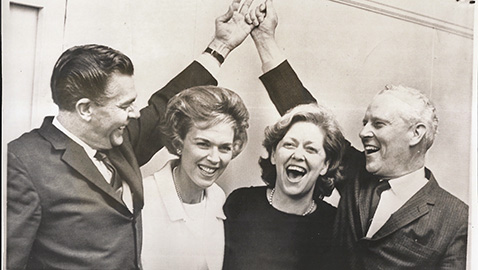 By Ray Hill
Frank Clement was the first incumbent governor in Tennessee to bid for the United States Senate since Tom C. Rye in 1918.  The unexpected death of Senator Estes Kefauver on August 10, 1963 necessitated a special election in 1964.  For the second time in thirty years, both of Tennessee’s seats in the United States Senate would be up for election.  The incumbent, millionaire businessman Herbert S. Walters, had been appointed by Governor Clement shortly after the death of Estes Kefauver.  Senator Walters had apparently given some thought to running, but he was not in the best of health and seventy-two years old.

Clement had served as Tennessee’s governor from 1953-59, the last man to win a two year term, and the first to win a four year term.  At the time, Tennessee governors could not seek a second consecutive four-year term.  Clement had backed his successor, Buford Ellington, in the 1958 election and for a brief time considered running against Senator Albert Gore.  Clement decided against making the Senate race that year and returned to practicing law.  Only thirty-two when he won his first term as governor, Clement was forty-two years old when he sought a third term in 1962.  With the announcement by Senator Walters that he would not run again during the last week of April, Governor Frank Clement declared his own candidacy for the Democratic nomination for the U. S. Senate on May 13, 1964.

Clement would be facing Congressman Ross Bass of Pulaski in the Democratic primary; the congressman was quick to react to Clement’s announcement.  Bass termed the governor’s candidacy “the most arrogant and blatant political attempt in the history of Tennessee.”  “Never before has a governor of this state attempted to seek election to another office while holding the office of chief executive,” Bass thundered.  He was wrong; Tom C. Rye had been the incumbent governor when he had challenged Senator John Knight Shields for reelection in 1918.  Likely Ross Bass didn’t give a damn, but rather enjoyed the opportunity to knock his opponent.  “I believe the people of Tennessee will absolutely rebel against this effort to gain political control of this state, both at the local and national level, by a few selfish political leaders,” Bass huffed.  The congressman added it was “almost an insult to the memory” of the late Senator Estes Kefauver for Clement to run to sit in the same seat in the U. S. Senate.

Governor Clement made his announcement at a press conference in Nashville surrounded by his wife, Lucile, as well as his three sons, Bob, Frank and Gary.  Clement spoke before newsmen instead of making his announcement before a throng of supporters.  While the Nashville Tennessean was bitterly opposed to Frank Clement, the governor immediately received the endorsement of the Tennessean’s rival daily newspaper, the Nashville Banner.  The Banner stoutly praised Clement’s accomplishments as governor, citing improvements in education, state institutions, and mental health.  The Banner believed Clement’s tenure as governor had been good for Tennessee.  “It is in Frank Goad Clement that the office will find the man,” the Banner editorial intoned.

Clement’s candidacy also won the instant support of the Johnson City Press-Chronicle, which stated the governor “towers above anyone now opposing him or likely to oppose him, either in the Democratic primary or the general election in November.”  The Press-Chronicle editorial said Governor Clement “has the experience and the stature to make a great senator.”  As the Press-Chronicle lent its own support to the governor, it said “we are confident he has the support of a large majority of Tennesseans.”

The Columbia Daily Herald also quickly endorsed Frank Clement’s bid for the United States Senate.  “Tennessee is a moderate state,” the Daily Herald editorial said and thought the people “wish to be represented in the U. S. Senate by someone who will weigh all the issues, consider all the facts and reach his own decisions.”  The Daily Herald credited Clement who “has done more than any one man to pull Tennessee out of the educational morass in which she was floundering near the bottom of the heap…”

The Tennessean was equally quick to remind its readers Clement’s senatorial candidacy broke a promise he had made at a 1963 press conference following Estes Kefauver’s death.  When questioned about his running in a 1964 special election, Governor Clement had replied. “I can lay these rumors to rest right now.  I was elected to serve as governor for four years and I intend, with the good Lord willing, to serve out that term.”

From Washington, D. C. came word from Senator Herbert “Hub” Walters that he welcomed Frank Clement’s entry into the Senate race to succeed him.  “I now have an opportunity to recognize through my vote a qualified candidate,” Mr. “Hub” exulted.  “He has my wholehearted, enthusiastic and completely unsolicited support.”

The Memphis Press-Scimitar published an editorial pointing to the statements issued by the Bass campaign and that of businessman M. M. Bullard of Newport, both announced candidates for the Democratic senatorial nomination.  “Judging from their statements,” the Press-Scimitar editorial said, “both Bullard and Bass consider the defeat of Clement the big goal.  If they really think that, they have only to look at past elections to see that to achieve that goal, one of them will have to get out of the race.”

Ellis Binkley, political reporter for the Kingsport News, published a column shortly after Clement’s announcement that Governor Clement had already won one election, albeit a mock election on the campus of Memphis State University.  Binkley wrote that Clement had handily won the mock election, winning 55% of the vote over Ross Bass, who garnered only 34% of the total.  The Tennessean charged the Clement campaign was being financed by “shakedowns” gathered from state employees.

If the governor’s campaign was off to a good start, Ross Bass was busy pressing his own.  Speaking in Chattanooga, Congressman Bass complained the governor had done little to alleviate the poverty in Tennessee.  In his address before the Tennessee Junior Chamber of Commerce, Ross Bass noted Clement had actually harmed poor Tennesseans by extending the sales tax to utilities.  Bass thundered Clement had testified before Congress on behalf of President Johnson’s war on poverty, but the governor “during his administration he has done nothing for these people.”  Bass said the extension of the sales tax to utilities “was a tax on the low-income people of Tennessee.”

Governor Clement was in no hurry to officially kick off his campaign for the Democratic senatorial nomination.  The governor announced he would return to Gallatin, Tennessee, where he had twice opened his campaigns for the gubernatorial nomination on June 20.  In his opener, Clement took his opponents to task, referring to Ross Bass and M. M. Bullard as “the colonel and the congressman.”  Clement dismissed Bullard, saying, “The colonel has no record to speak of except one of doing business with the state – – – before I came into office.”  Governor Clement accused Congressman Bass of absenteeism, especially as a member of the House Agricultural Committee.  Clement also hit Bass for voting for the Civil Rights Bill of 1964, telling his audience “an excess of civil rights is destructive of liberty under law.”  Clement chortled, “The congressman has drawn a salary in Washington for 10 long years.  He has introduced 55 bills.  Let’s take a look at his batting average.  He passed exactly three.”  The governor accused Bass of being a tool of organized labor.  Clement pointed out the congressman had been endorsed by organized labor, but sniffed, “I am content to take my chances with the fair minded laboring people of Tennessee.”  The governor touted his own record as Tennessee’s chief executive, pointing out expenditures on education had increased by 180%, teacher salaries had doubled, while the state had built three hospitals for the mentally ill.  Clement said his philosophy of government was “pay as you go”, a notion both Bass and Bullard seemed to dislike.  The governor thought that typical of Washington thinking and Clement told his audience he was brought up to believe that folks should be willing to pay for what they get.

Ross Bass snorted Clement’s opening speech sounded as if it had been written for Senator Barry Goldwater, the conservative GOP presidential nominee.  Congressman Bass reiterated an invitation for the governor to meet him in a televised debate.  “The governor is against everything the President is for – – – the Tennessee Valley Authority, the State Department, medical care for the aged and the fiscal policies of this administration,” Bass complained.  “I wonder how compatible the governor would be running with the President in November?”  Bass concluded he and the governor were “at variance on many issues” of concern to Tennesseans.  “In his speech the governor said he would meet the issues eye to eye and toe to toe,” bass said.  “I’m willing to put my eye against his and discuss the issues.”  When pressed by reporters for a comment about Governor Clement’s fiery denunciation of Amon Carter Evans, publisher of the Nashville Tennessean, Congressman Bass demurred.  “I won’t comment except to say that the governor can continue his fight with Mr. Evans.  I think Mr. Evans can take care of himself.”  Indeed he could; the Tennessean kept up a relentless criticism of Governor Clement throughout the campaign and beyond.

While opening his headquarters in Memphis, Ross Bass said of Clement, “Every time this man has been allowed to be the chief executive, he has imposed new taxes, taxes that hurt the people who work for a living.”  M. M. Bullard, speaking in Chattanooga, said Ross Bass was “the shoeshine boy of special interest groups.”

As the campaign for the senatorial nomination drew to a close, both Bass and Clement attacked one another for alleged absenteeism.  “As an example,” Bass told 2,000 people at a rally in Cookeville, “last year, after the end of the 1963 Legislature but before Clement became an active candidate for the Senate, he only spent 61 days in his office during the rest of the year.”  Speaking in Springfield, Tennessee, Governor Clement charged Bass with “neglecting” his own sixteen county congressional district and said the congressman had missed 67 of 76 meetings of the House Agriculture Committee and the subcommittee upon which Bass served.

As usual, all of the candidates claimed to be confident of victory as Election Day approached.  When the results began to trickle in, Governor Frank Clement was stunned.  Bass won all four big urban counties: Knox, Hamilton, Davidson and Shelby.  Bass won Davidson by the astonishing margin of better than 63%, with Governor Clement failing to win even 30% of the vote.  Clement was further humiliated by narrowly losing his own Dickson County.  Ross Bass won a resounding victory in the Democratic primary, winning with just over 50% of the vote; Governor Clement trailed with under 36% of the vote, while M. M. Bullard took the remainder.  It was the first time Frank Clement had lost an election and he proved to be gracious in defeat.  “All my life I’ve always gotten almost everything I asked for it seems like,” Clement said.  “I hope the people will now unite behind me for the next two years.”

The governor admitted losing was a “new experience” for him and readily offered his support to Ross Bass, who faced Republican Howard Baker in the general election.  Clement absolved his friends and supporters for his loss, saying any fault for losing was his own.  The governor acknowledged his supporters and campaign managers could not have worked any harder on his behalf.  Clearly, the defeat stung and Clement wistfully quoted his mother, “She told me once that if I didn’t win, it would only be because the people of Tennessee couldn’t stand the thought of giving me up as governor.”

“The governor’s statement was very magnanimous and I appreciate it very much,” Ross Bass said.

The 1964 Democratic primary was over, but there would be another in two short years.