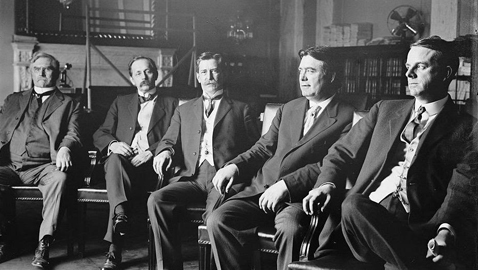 Governor Tom C. Rye had run for the United States Senate in the 1918 Democratic primary against Senator John Knight Shields as a supporter of President Woodrow Wilson and lost. Rye’s defeat did not necessarily mean the people of Tennessee had turned against Wilson; in fact, had the President written the public letter denouncing Shields as no friend to his administration, the senator would have certainly lost. Kenneth D. McKellar, Tennessee’s junior U. S. senator, was a sincere admirer and supporter of President Wilson. It had been McKellar who had convinced the President not to write the letter that would have surely sunk John Knight Shields’ candidacy for reelection. Nobody was more surprised than McKellar when, once he was safely reelected, John Knight Shields snarled he would see the President and his secretary in Hell before he would thank them for not having sent the letter. Serving with seven Presidents of the United States, K. D. McKellar would always maintain Woodrow Wilson was the greatest of them all.

The 1918 elections had not gone well for Woodrow Wilson. President Wilson had asked the American people to give him a Democratic Congress, a plea that was ignored by the voters. Instead, the people gave President Wilson a Republican Congress. The battle for the United States to join the League of Nations occurred in the U. S. Senate was combined with the acceptance of the peace Treaty of Versailles. The treaty had been approved by the heads of state representing the allied powers in Paris, which included Woodrow Wilson.

Even with a Republican Congress, it was the President’s intransience and refusal to comprise that doomed the effort for American participation in the League of Nations. Nor did the President have a united party behind him in Congress. Tennessee’s senior United States senator, John Knight Shields, would prove to be as difficult as President Wilson had predicted.

In March of 1919, the people of Chattanooga were to greet troops from the “Old Hickory” division who were returning home. A reception committee formed of some 200 of Chattanooga’s “best-known” citizens, were due to greet the returning soldiers, along with Senator McKellar and Governor A. H. Roberts. That evening McKellar was to give an address at the Bijou Theatre in support of the League of Nations. Jesse Littleton, Mayor of Chattanooga, had proclaimed the day a holiday and business owners had agreed to allow employees off for the celebration to honor the troops. After speaking in Chattanooga, Senator McKellar traveled to Shelbyville where he once again made an address urging American participation in the League of Nations. The Bedford County Committee of the League to Enforce Peace sponsored McKellar’s speech. Organizers frankly admitted the purpose of the event was to mobilize local opinion in supporting the League of Nations. As Congress prepared to meet in May of 1919, Senator McKellar was one of the early arrivals in Washington, D. C. The Nashville Tennessean reported McKellar spent most of the Congressional recess “in Tennessee where he made a number of speeches on the League of Nations.” McKellar did not confine his speechmaking to Tennessee; he traveled to Arkansas and Missouri on behalf of the League of Nations. When queried by the press, McKellar made a bold prediction, saying his travels convinced him that opinion was strongly in favor of the League and he did not believe “more than six Senators will be willing to go on record in refusing ratification of the treaty.” McKellar’s opinion was not only bold, but entirely too optimistic.

Senator John Knight Shields had been easily reelected in the 1918 general election against H. Clay Evans, a former Republican congressman who had once had the governorship stolen from him by enterprising Democrats. Shields was apparently ailing at the beginning of 1919. Senator John H. Bankhead of Alabama informed the Senate Shields was unwell and would not be able to attend to the business of the U. S. Senate “for an indefinite period.” Shields had left Washington in November when Congress had adjourned to return to his home and fallen ill. There was speculation in Tennessee newspapers Senator Shields would be “hardly able to resume his duties at this session of Congress.” Whatever was ailing John Knight Shields was evidently not as serious as first believed, as the senator arrived in Knoxville on February 14, 1919 on his way back to the Capitol. Shields was clearly feeling much better and eager to return to Washington.

Mere days after John Knight Shields boarded the train in Knoxville bound for Washington, D. C. the Tennessee State Senate adopted a resolution heartily endorsing Woodrow Wilson to be the first president of the League of Nations. The State Senate also invited both Senators McKellar and Shields to come to Nashville and speak before the Tennessee General Assembly about federal legislation to improve roads. While Tennessee’s two United States senators may have disagreed about the League of Nations, they worked together where state issues were involved. Both McKellar and Shields had been incensed when Attorney General Thomas Gregory made a recess appointment of George Witt to serve as U. S. Marshal for the Middle Tennessee district. Gregory made the appointment while President Wilson was in Paris and without consulting either senator, and just days before resigning his own office. Not surprisingly, neither Shields nor McKellar approved of the Witt appointment and objected strenuously.

Senator McKellar’s position on the League of Nations was quite clear, but John Knight Shields had been rather quiet on the topic. When Shields returned home to Tennessee that August, he gave an interview to the Knoxville Journal and Tribune and announced he would not support the League of Nations without reservations, a position taken by Henry Cabot Lodge of Massachusetts, Chairman of the Senate’s Foreign Relations Committee. Lodge and Woodrow Wilson did not especially like one another and that dislike would soon harden into cool hatred between the two men. Lodge proposed to approve the treaty with reservations he had authored, something Woodrow Wilson considered to be personally offensive. The President rook the position the Senate must ratify the treaty without any reservations. Despite the warnings of numerous senators of the President’s own party the treaty would never pass without attaching the reservations, Wilson remained adamant. Even some Democratic senators, including Key Pittman of Nevada and Robert Owen of Oklahoma, proposed offering reservations to American participation in the League of Nations. Shields stated his own opinion in no uncertain terms. “I am opposed to any covenant that will involve the United States in every broil and engage them in every war that may be waged throughout the world.” Senator Shields said he had read the language proposed by Senator Pittman and intended to support the Nevadan’s reservations to the League of Nations.

The position taken by Senator John Knight Shields infuriated many Tennesseans, especially fellow Democrats who felt he was aligning himself with Congressional Republicans against President Wilson. General M. N. Whitaker wrote an incendiary letter he released to the press demanding Shields resign from the Senate. Whitaker told Shields he should surrender his office and if confident of his own position, run in a special election to succeed himself. Joseph Tumulty, President Wilson’s secretary, wrote General Whitaker commending him on his letter to Senator Shields. “The soldiers who went to war and those who fought in France ought not to be satisfied with Senator Shields committing the state to a pulley in opposition to President Wilson’s plans,” Whitaker fumed, “unless the people of the state believe that President Wilson is wrong in his advocacy of the treaty of peace and the League of Nations and Senator Shields is right in his opposition to it.” “Shall the Democrats of Tennessee instruct Senator Shields or shall Senator Shields act for the democracy of Tennessee without instructions?” General Whitaker thundered.

Much to the dismay of General M. N. Whitaker, John Knight Shields did not intend to be bullied or influence by anyone, including citizens in his own state. Shields voted with the Republican majority on the Senate Foreign Relations Committee to approve several of the reservations sponsored by Henry Cabot Lodge. The other six Democrats on the Foreign Relations Committee voted as a bloc against the reservations. When asked if he intended to resign, Shields literally laughed in the face of the reporter asking the question. Rejecting the idea of a formal interview, Shields “talked freely and frankly” to the reporter for the Nashville Tennessean’s Washington bureau. Senator Shields indicated he was not alone in his decision to refuse to support the treaty without reservations, noting he had considerable correspondence from many of Tennessee’s “most prominent lawyers.” Shields took pains to make clear he was not against the Treaty of Versailles nor was he against American participation in the League of Nations. Senator Shields said his sole concern was precisely how either affected the people and interests of the United States. Shields pointed out much of the language was ambiguous and he was supporting reservations that protected the United States and made America’s position quite clear. Shields scoffed at the idea support for the treaty and the League of Nations was a matter of party fealty. The senator retorted he believed the Senate should consider both as Americans, rather than as Republicans or Democrats. It was not, Shields insisted, a political question. Shields also pointed out the obvious; if it were indeed a political question, the treaty would go down to defeat precisely because the Republicans had a majority inside the Senate. Shields stated he did not care what pressure was brought to bear; he would not vote for the treaty without reservations.

Both Senators Shields and McKellar were hearing from Tennesseans about the League of Nations. One such appeal was from twenty-five Methodist ministers from Nashville whose combined congregations accounted for some 30,000 people. The ministers urged the senators to support the League of Nations. When a local Kiwanis Club in Tennessee was faced with a resolution from an angry member who urged they castigate Senator Shields, the resolution was quickly tabled. A mass meeting of citizens in Sullivan County approved a resolution urging both Senators Shields and McKellar to support the treaty without amendment.

Former Attorney General of Hamilton County Matthew N. Whitaker remained enraged by Senator Shields’s attitude. Whitaker proposed a public indignation meeting to lambast the senator’s refusal to heed what the General believed to be the will of the people of Tennessee. The senator continued to ignore General Whitaker and had other things on his mind. Shields was hosting the wedding of his stepdaughter, Miss Jeanette Cowan, at his home, “Clinchdale.” Interestingly, Miss Cowan was marrying Lieutenant Colonel Clement Heth, a veteran of the World War.

The absolute refusal of John Knight Shields to be pressured brought an opinion from John Draper Erwin, the Tennessean’s correspondent in Washington, D. C. Erwin concluded Shields’ determination not be influenced by public opinion could only mean the senator had no intention of running again in 1924. Otherwise, Shields would be concerned about bucking the Democratic organization, Erwin believed. Erwin reasoned Shields would be quite nearly seventy years old when his current term expired and would be “a great deal less vigorous than the average man when he reaches that age.” Erwin confirmed Shields had been largely ignored by the Wilson administration since he first came to Washington in 1913 and the Tennessean columnist wondered if the senator did not enjoy the opportunity to return the favor.

While his enemies smoldered with indignation, John Knight Shields enjoyed mint juleps beneath the massive oaks of his plantation home. Senator Shields and his wife hosted what even the Tennessean referred to as “one of the most outstanding events in Southern society circles for the year” when they gave away their daughter in marriage. As Lieutenant Colonel and Mrs. Heth prepared to leave for a honeymoon in Hawaii, Senator John Knight Shields was content.