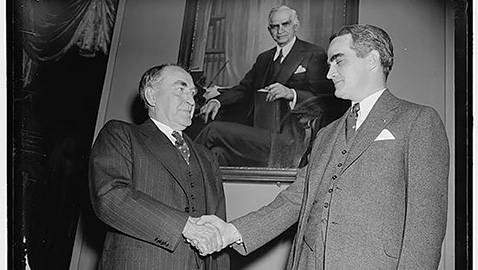 By Ray Hill
Congressman Joseph W. Byrns, Jr. seemed to have everything going for him; the only child and namesake of long-time congressman and late Speaker of the House Joseph W. Byrns, had defeated a reasonably popular incumbent inside the Democratic primary in 1938.  Young Joe Byrns seemed a favorite of the House leadership, all of whom had known and liked the elder Byrns.  Congressman Byrns had already been given several opportunities unusual for a freshman representative, including a rapid promotion to a major House committee of importance to his district.

The momentum of Joe Byrns’ upward trajectory can be pinpointed with his remarks about the monarchs of Great Britain.  Few politicians were as shrewd as Franklin D. Roosevelt and the President had calculated a visit by King George VI and his Queen would captivate the American people, especially if the royals seemed like regular people.  When the British Embassy announced it would host a garden party in June of 1939, Washingtonians went wild.  In the beginning, only a few select members of the U. S. Senate and the House leadership were to be invited to the party.  It quickly became clear there would be a violent mutiny by Congressional wives unless the guest list was much expanded.

Congressman Byrns met their Britannic Majesties and bragged about wearing a $12.50 summer suit (the equivalent of about $231.00 today), but it was comment about the royal couple that horrified a good many Tennesseans.  “What a couple of flat tires they turned out to be,” Byrns complained.  For one thing, most Tennesseans were mortified one would talk about guests in such a way.  Even Tennessee’s peppery senior U. S. senator, Kenneth D. McKellar, described the King and Queen as “lovely” people.  It wasn’t long before the young congressman felt some disapproval inside his own district.  Sam B. Walker wrote the editor of the Nashville Tennessean to sarcastically suggest Byrns ought to be appointed to the diplomatic corps considering his flair for commentary.  Mr. Walker then suggested perhaps Byrns should take the place of Secretary of State Cordell Hull, whom the author strongly suspected the congressman would also consider a flat tire.  Walker noted Byrns’s opinion of the royal couple was “adverse to the opinions of all other American notables.”  Sam Walker concluded by writing, “Mr. Byrns should be crowned with a tire as flat as he is.”

The Clarksville Leaf-Chronicle published an editorial about the young congressman’s remarks entitled, “Poor Manners.”  The Leaf Chronicle said Congressman Byrns did not represent the vast majority of Americans in having a poor opinion of the King and Queen of Great Britain.  The editor of the Leaf-Chronicle pointed out the royals were not the head of state, but rather the “symbols of a great empire.”  Any discourtesy extended to the monarchs “while they were our guests was a discourtesy to the British Empire and a display of bad manners.”

Several Tennessee newspapers, including the Tennessean, contrasted the comments of Congressman Byrns with the “fine and lovely” statement of Senator McKellar.

The Tennessean had its own lengthy editorial castigating Congressman Joe Byrns, Jr.  The Nashville newspaper’s sentiment was immediately clear when it referred to the young congressman as “Little Joe” and wondered if the Revolutionary War had ended.  The Tennessean, in a jab at Byrns’ young age, thought perhaps “’Little Joe’ had a colic.”  “At any rate,” the editorial snapped, “he has felt himself called upon to add a very sour postscript to Yorktown, to throw one last harpoon into the defeated redcoats, to explode once and for all the nice fancy that in America civilization has reached its apogee…”  The Tennessean reminded Congressman Byrns the King and Queen were in America as the invited guests of President Roosevelt and quoted Vice President John Nance Garner, a crusty Texan, as saying King George was a “mighty fine feller” and the Queen to be a “beautiful little lady.”  “Senator McKellar, the senior senator from your state,” the Tennessean noted, “was affable and gentlemanly in his reference to the distinguished guests.”  After pointing out no other member of the Tennessee Congressional delegation “saw any ‘flat tires’ around” Washington, sadly concluded, “It must have been the colic, Joe.  We’d hate to think anything else.”

Joe Byrns was smart enough to realize his mistake and he promptly sent a telegram to the Tennessean emphatically denying he had made the statement attributed to him by the newspaper.  “You have done me a great injustice” for having published the quote purportedly made by him, Byrns complained.  “I positively did not make this statement or any one similar at any time.”  Byrns told the Tennessean, “In justice to me you should publish this denial and retract criticism of me which is not merited.”

Byrns certainly got a reaction from the Tennessean.  Bascom Timmons, one of the best known newspaper reporters in Washington, D. C. asked Lacey Reynolds of the Tennessean’s Washington news bureau to provide readers with the details of his interview with Congressman Joe Byrns, Jr.  Reynolds said he telephoned Byrns from the press gallery of the House of Representatives “between 4 and 5 o’clock Friday.”  Reynolds claimed the congressman’s secretary put his call through and he spoke to Byrns and wondered what the young man thought about “meeting the King and Queen” and asked for any comments he cared to make.  Lacey Reynolds insisted that was when Congressman Byrns made his comment about “flat tires.”  Reynolds said he was surprised, as it was “the first unfavorable impression of the royal couple among the two dozen or so congressmen I had contacted during the day.”  Reynolds told Timmons he was “too much surprised to laugh” by Byrns’s comment nor was there any indication the congressman was being “facetious” or joking.  Lacy Reynold described Joe Byrns, Jr. as being “dead serious.”  Reynolds had not seen Byrns earlier in the day and asked what the congressman had worn to the reception.  Byrns mentioned the $12.50 summer suit he had bought two years earlier.

Byrns had tried to repair the damage after receiving telephone calls to his office, as well as indignant telegrams.  The congressman said the quote was an “unqualified falsehood…”  Byrns explained he had seen the King and Queen “face to face less than one minute” and shook hands with both and did not exchange a single word in the reception line.  Byrns tried to explain the brief interlude was “insufficient for me to make up my mind either pro or con” about the royals.  “They appeared to be a very pleasant couple and the Queen is a much prettier woman than her pictures would indicate,” Byrns added.

Nor was Byrns without his defenders.  One Herbert Sanborn of Vanderbilt University sent a letter to the editor of the Tennessean, which was vitriolic and insulted the royals anew while throwing a few blows at financier J. P. Morgan and the war debt that remained unpaid by Great Britain from the First World War.  It likely did Byrns little good.

Byrns managed to disappear from the headlines for a few weeks and made his “maiden speech” in the House of Representatives on July 11, 1939 following the passing of Congressman Sam D. McReynolds of Chattanooga.  McReynolds had been the Chairman of the House Foreign Affairs Committee and a stalwart of the New Deal.  It had been McReynolds who three years earlier had announced the death of Speaker Joseph W. Byrns.  Congressman Byrns closed his own tribute to the late McReynolds with the very same words McReynolds had used in closing his eulogy to Speaker Byrns, “My heart is too full of emotion.  I can say no more.”

Joseph W. Byrns, Jr. had managed to defeat incumbent Richard M. Atkinson by running on a “100% Roosevelt” platform.  Atkinson was viewed as being somewhat more conservative than Byrns and had strayed a few times from the New Deal.  Byrns, along with two other Tennessee Democrats, voted against the administration “on the crucial vote” for a $2 billion lending bill.  Herron Pearson of Jackson and Wirt Courtney of Franklin, as well as Joe Byrns, Jr. voted with East Tennessee Republican J. Will Taylor against the Roosevelt administration.  Jere Cooper, Albert Gore, and Walter Chandler of Memphis supported the New Deal.  Byrns told one news correspondent he had voted against the lending bill in the belief it would likely enhance the passage of the housing bill before Congress adjourned.  “I am tremendously interested in the housing bill,” Byrns said, “because it carries funds for the completion of Nashville’s slum clearance program.”  Byrns stated he felt certain had the lending bill passed, the housing legislation “would have been defeated beyond a doubt.”

Those were not all of Joe Byrns, Jr.’s complaints about the proposed lending bill.  “Furthermore,” Byrns explained, “the lending bill was, in my opinion, an effort to increase the public debt beyond the limit permitted by law.”  Byrns insisted “adequate appropriations” for most of what would have been accomplished by the lending bill had already been made by the Congress and “the allocation and approval of projects was left to one man – – – the President.”

The Nashville Tennessean did not approve.  A small editorial the following day published the photograph of three congressional Republicans, including Minority Leader Joseph Martin of Massachusetts.  According to the Tennessean, the “Gloat Club” of GOP congressmen in the House of Representatives were positively giddy with delight at the failure of the lending bill and the newspaper was quick to point out those gloating included Herron Pearson, Wirt Courtney, and Joe Byrns, Jr.  The Tennessean lamented the three Tennessee Democrats had voted with the Republicans to kill the lending bill “which had already been passed by the Democratic senate” and was “a Democratic measure proposed by the leader of the Democratic party, Franklin Delano Roosevelt.”

Nashville’s other daily newspaper, the Banner was a more conservative publication and owner James Stahlman published an editorial praising Byrns, Person and Courtney.  The Banner thought the congressmen “displayed sound judgment, the courage of convictions and a compelling regard for the best interests of the nation when they voted against the President’s latest huge lending-spending bill, the fourth measure of that description he had proposed in the name of recovery.”

That same week the New Deal, which was facing a coalition of conservative Democrats siding with the Republican minority in Congress, lost a critical vote on the housing legislation that meant so much to Joe Byrns, Jr.  Once again, there was a freshman Democrat apostate who helped to defeat the bill.  This time it was young Albert Gore of Tennessee’s Fourth Congressional district; the same district that had routinely returned Cordell Hull to the House of Representatives.  By a vote of 191 – 170, the House defeated the $800 million housing bill.  Gore was one of 54 Democrats who joined 137 Republicans in voting against considering the housing bill.  Gore made his own maiden speech against the housing legislation, which he said was “neither self-liquidating nor low-cost.”  Gore’s speech helped to seal the fate of the bill in the House and the Tennessean bitterly acknowledged the young congressman was “a hero” of the defeat of the housing legislation.

Certainly Albert Gore was no conservative, remaining an outspoken liberal throughout his long Congressional career.  Perhaps young Joe Byrns, Jr., like his colleague from the neighboring Fourth Congressional district, simply disagreed with the President and the New Deal administration on a legislative program.  Still, there were those that were not ready to forget Byrns had run on a “100% Roosevelt” platform against his predecessor.

Joe Byrns, Jr. returned home to Nashville and began to attempt to mend his political fences.