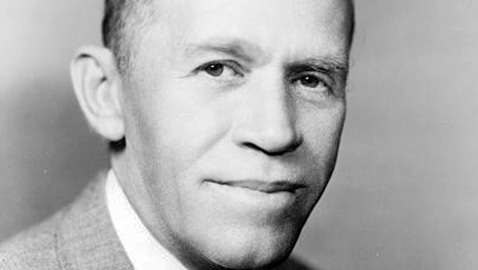 The very idea that anything but a Democrat could represent Tennessee’s Hermitage District in Congress seemed not only outlandish, but utterly unthinkable. The Fifth Congressional district of Tennessee was known as “the Hermitage District” because it contained the home of the founder of the Democratic Party, General Andrew Jackson. Congressman Joseph W. Byrns, Jr., son and namesake of the district’s longest serving congressman and Speaker of the House Joseph W. Byrns, Sr., had won the seat in 1938 after a hard fought campaign. Byrns had been renominated in the 1940 primary election without returning home to campaign, choosing instead to remain “on the job” against two formidable opponents.

Joe Byrns, Jr. had infuriated many of his constituents by voting with Congressional Republicans for an amendment to the conscription bill supported by President Franklin D. Roosevelt and Secretary of State Cordell Hull by isolationist Hamilton Fish. Fish’s amendment would have delayed conscription and many believed it would have hampered the Roosevelt administration’s drive to prepare America’s defenses as World War II erupted in Europe.

With two of the biggest newspapers in his district – – – the Nashville Tennessean and the Clarksville Leaf-Chronicle – – – promoting the campaign of his opponent Percy Priest, Joe Byrns, Jr. should have known he was in for a fight. At least initially, Congressman Byrns seemed not to be able to comprehend that the campaign of a candidate running in the general election as an Independent had any hope of success. Ordinarily, that would have been quite true. As if to illustrate that point, Julian H. Campbell, a former member of Tennessee’s Railroad & Utilities Commission, announced he, too, would be running as an Independent in the general election, although he was a Republican.

Nationally syndicated columnist and muckraker Drew Pearson did nothing to help Congressman Joe Byrns, Jr. by publishing a column claiming he was a “GOP favorite”, not exactly a plus inside Tennessee’s Hermitage District. “Every time he takes the floor” Pearson wrote, the Republicans “give him a big hand.” Pearson exaggerated wildly, writing Byrns had changed from a New Dealer to a fierce critic of President Roosevelt “particularly on labor and foreign policy issues.” The columnist claimed Byrns had “sizzled Roosevelt on these matters to a turn.” Pearson then purported to quote two GOP congressmen praising Bryns’ speech about the conscription bill at a table in the House restaurant; one of the two, a “hefty” congressman representing “swanky Oyster Bay” and the other a Mid-Western “isolationist” who claimed the Tennessean had “been a big help to us.” A columnist of oftentimes doubtful veracity, Pearson may well have been aiding Percy Priest or doing a favor for a friend, although it is entirely possible the muckraker may have been horrified by Byrns having voted for the Fish amendment.

Whatever Drew Pearson’s motivations, his column hit its target as intended. The profoundly anti-Byrns Clarksville Leaf-Chronicle used the muckraker’s column and the entrance of Julian H. Campbell into the race as the source for yet another editorial condemning the congressman. The Leaf-Chronicle recycled most of Pearson’s column as gospel and wondered why anyone would waste a vote on J. H. Campbell, a Republican, when there was “Little Joe” Byrns, the new favorite of Republicans in Congress. The Leaf-Chronicle did not even bother to place quotation marks around entire portions of Pearson’s column it printed as fact. The newspaper editorial concluded by wondering if Republicans thought by supporting Joe Byrns, Jr. they could “help swing the old Hermitage District for Willkie.”

Joe Hatcher, the Tennessean’s featured political columnist, reported in his column on September 20, 1940 that persistent rumors were floating throughout the Fifth Congressional district that Richard M. Atkinson was “itching” to announce his own Independent candidacy for Congress. According to Hatcher, friends of the former congressman warned Atkinson another candidacy would likely help Byrns rather than defeat him. How well Dick Atkinson would have fared as a candidate in the general election is anybody’s guess, but Joe Hatcher was likely more interested in keeping the former congressman out of the race as he was right, it probably would have hurt Percy Priest’s campaign. Hatcher began traveling with the Priest campaign and filing favorable stories daily for publication in the Tennessean.

Nashville’s other daily newspaper, the Nashville Banner strongly backed the candidacy of Congressman Joe Byrns, Jr. Owned and published by James G. Stahlman, the Banner was Nashville’s more conservative newspaper and the Clarksville Leaf-Chronicle, missing no opportunity to run over Byrns, pointed out the endorsements made by the Banner. Largely ignoring the fact the Banner was strongly for Senator McKellar, Governor Prentice Cooper, and every Democrat in the Tennessee Congressional delegation. The one Democrat the Banner had not endorsed was Franklin Delano Roosevelt. Stahlman was bitterly opposed to a third term for any president, Roosevelt included. The Banner had endorsed Wendell Willkie. Once again, the Clarksville Leaf-Chronicle tried to intimate the Banner’s support of Joe Byrns, Jr. and Wendell Willkie was somehow connected.

By the first week of October, Congressman Joe Byrns, Jr. had yet to take to the campaign trail inside the Fifth District while Percy Priest pounded him daily, abetted by a friendly press. Banners began to be erected throughout the Hermitage District declaring support for “Roosevelt, McKellar, Cooper and Byrns,” while others were hung across busy streets in Nashville and Clarksville. The Banner published a story that was soon carried by every major newspaper in Tennessee, quoting Senator K. D. McKellar who was supporting Joe Byrns, Jr. “A few people have asked me about the situation in the Fifth District,” McKellar said, pointing out Byrns “is my running mate on the state ticket and I am for him and don’t think there is a shadow of doubt that he will be overwhelmingly elected in November.” Of course Senator McKellar was a highly partisan Democrat and regularly endorsed the party ticket from top to bottom. Even when his friend and political partner E. H. Crump bolted the Democratic ticket in 1948 and supported “Dixiecrat” Strom Thurmond, McKellar endorsed President Harry Truman. Apparently, McKellar found it inconceivable to think the Hermitage District would reject the Democratic nominee. He was hardly alone in that opinion.

A few days later the Banner published the endorsement of Senator Tom Stewart of Joe Byrns., Jr. “Of course I am for Joe Byrns, just as I am for every other Democratic nominee in the November election,” Stewart was quoted by the Banner.

Joe Hatcher published a column pointing out Joe Byrns, Jr. had not been the choice of a majority of voters inside the Fifth District. The vote had been divided between three opponents and Byrns. The three other candidates had polled 18,131 to 13,911 for Byrns. Byrns only received a majority of the vote in Sumner County.

In another column published October 16, 1940, Hatcher wrote that Congressman Byrns was finally returning to the Fifth District from Washington, D. C. Hatcher opined the congressman would return to the Hermitage District to find a very different reaction from the voters. The supporters of former congressman Richard Atkinson “are almost solidly supporting the Priest candidacy.”

Percy Priest, if anything, increased his speaking schedule throughout the Fifth District. Byrns told the Murfreesboro Daily News-Journal he would carry on “a campaign on behalf of all democratic nominees.” The congressman leisurely said the dates and places of his speaking engagements would be released by the Democratic Headquarters. “I do not propose to indulge in the same sort of mud-slinging which has been directed at me in the past month,” Byrns added.

“He came back to attempt to ride with the men he walked out on in Washington!” Percy Priest cried.

Rebecca Harris Stubbs wrote an entire book about “J. Percy Priest and His Amazing Race,” which is a good biography of the late congressman. Ms. Stubbs relates a rumor that circulated widely throughout the Hermitage District even before the primary election in August. Ms. Stubbs writes that a quote was attributed to Byrns whose sole campaign “appearance” during the primary was a radio broadcast from Washington, D. C. According to the author, the rumor was Congressman Byrns had supposedly said he “didn’t plan…to come home and shake hands with the clodhoppers to stay in Congress.” If that statement, along with the unfortunate quote about the King and Queen of Great Britain, were not true, Joseph W. Burns., Jr. surely had to be the victim of a malicious media and rumor mill. Evidently, many voters inside the Fifth Congressional district were ready to believe it.

Nor did Joe Byrns, Jr. much act as if he cared whether he was reelected to Congress. After coming home from Washington, D.C., the congressman finally announced a total of six speaking engagements. Even then, the speaking dates were not released until almost ten days after Byrns’ return to Nashville. The dates released by Democratic headquarters stated Byrns would speak in Hartsville on a Saturday afternoon and in Gallatin that same night. There was not another speaking engagement until the following Thursday when Byrns was due to speak in Springfield. The following Saturday Congressman Byrns would speak in Dover and Clarksville. Evidently the campaign had scheduled an event for Lafayette, but no date was attached to it. By any standard, it was at best a lackadaisical speaking schedule for a serious candidate and especially a young, healthy incumbent.

The honesty of Percy Priest was demonstrated in an amusing little story the candidate told on himself. He had been so busy with his campaign Priest admitted that he had failed to register to vote and therefore could not vote for himself in the November election.

Byrns made his speech in Gallatin and began by complaining about the “mud-slinging” he had been subjected to throughout the entire campaign. The Tennessean reported Byrns made a goodly number of “caustic” references to “my opponent” without once mentioning Percy Priest by name. Byrns cited a litany of measures and appropriations he had supported and voted for in Congress. “Figures don’t lie,” Congressman Byrnes snapped. “That’s more than I can say about some people I have heard about lately.” Byrns said it was unfair for Priest to focus solely on one issue pertaining to his record in Congress to the exclusion of everything else. The congressman thought Priest should state his own stands “on agriculture, labor, and above all, taxation, but he can’t tell you anything but ‘God Bless America’.”

The incumbent congressman did exude confidence. “As sure as this is Sumner County,” Byrns intoned, “I am going to be elected Tuesday week. I’ll be elected. I don’t say in my speeches ‘if I am elected’. If I wanted to emphasize that I say, ‘I will be elected’.”

Congressman Byrnes told his listeners in Gallatin, “It’s the same old bunch of sore toes that can’t take it who are opposing me now. I beat them twice and I’ll do it again.”

In his opening speech at Hartsville, Byrns stressed support for the Democratic ticket from President Roosevelt to the local constable. As to his record with reference to national defense and preparedness, Congressman Byrns pointed out he had been commended in a letter by no less than General George C. Marshall, Chief of Staff of America’s Army. Byrns derided Percy Priest as an opportunist “trying to ride into office on a wave of popular hysteria.”

It was hardly a surprise when Governor Prentice Cooper announced his support for Congressman Joseph W. Byrns, Jr. Cooper said as a Democrat he had never failed to support the Democratic ticket. The governor stated he hoped Joe Byrns, Jr. would be reelected.

The campaign to determine the congressman for Tennessee’s Hermitage District was almost over.