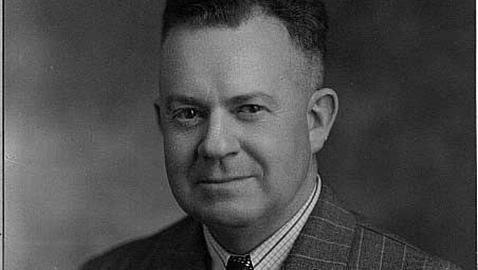 By Ray Hill
All things considered, thirty-six year-old Congressman Joseph W. Byrns, Jr. seemed to be a sure bet for reelection in 1940.  Representing Tennessee’s famed “Hermitage District,” so named because it contained the home of General Andrew Jackson.  As befitting the Hero of the Battle of New Orleans and the founder of the Democratic Party, Tennessee’s Fifth Congressional district was solidly Democratic.  The contest for Congress inside Tennessee’s Hermitage District would be conducted in the Democratic primary.  From all appearances, Joe Byrns, Jr. seemed likely to represent his district as long as his father had, twenty-eight years.  Indeed, appearances can be deceiving and a single utterance or event can markedly change the course of political events.

As the New Year opened, half of the Tennessee Congressional delegation were freshmen legislators.  Senator Tom Stewart had been elected in the 1938 election, as had Joe Byrns, Jr. and Albert Gore.  Wirt Courtney won a 1939 special election to succeed Clarence W. Turner; Estes Kefauver won a 1939 special election to succeed Sam D. McReynolds, as did John J. Jennings of Knoxville, who succeeded J. Will Taylor.  Another member of the Tennessee Congressional delegation left as 1940 began, though fortunately not through death.  Walter Chandler of Memphis resigned to become mayor of Memphis.  Chandler would be replaced by Clifford Davis via another special election shortly.

Byrns was continuing to do those things that congressmen are expected to do by their constituents; those same things usually have the habit of ingratiating those same congressmen with their voters.  Congressman Byrns notified Davidson County Judge Litton Hickman of a small federal appropriation to help with zoning unincorporated areas of the county and personally greeted a group of Nashville college students who were in Washington to attend the American Youth Congress.  Byrns personally took the students on a tour of the Capitol.  Congressman Joe Byrns, Jr. was one of many dignitaries offering special congratulations to Stratton Foster, the new owner and publisher of the Clarksville Leaf-Chronicle.  Among the others wishing Mr. Foster success with his newspaper was Senator Tom Stewart and Kentucky Governor A. B. “Happy” Chandler.  Byrns offered his own words of praise for Stratton Foster, saying, “I have known Mr. Foster for about twenty years.  He is a fine businessman, a fine newspaperman and an all-round public-spirited citizen of Tennessee.”  Clarksville and Montgomery County were important voting hubs and population centers inside Tennessee’s Hermitage District.

The young congressman’s wife, incidentally, had her own name liberally sprinkled throughout Tennessee newspapers during her husband’s time in Congress, as she evidently thoroughly enjoyed the social life of Washington, D. C.  Most newspapers found they could attract new readers by publishing stories of interest to women and the society pages were highly popular with female subscribers who enjoyed the description of glittering parties and the exquisite gowns worn by those attending.  Cissy Patterson, publisher of the Washington Herald had made her newspaper the most widely read in the nation’s Capitol precisely because she was one of the first publishers to target female audiences.  Other newspapers were quick to follow suit and ladies in Tennessee could faithfully follow Mrs. Joseph W. Byrns, Jr.’s wife, Cornelia Park Byrns’ busy social schedule.  Cornelia Park Byrns was with her husband on February 25, 1940 when the Tennessee State Society honored the members of the Volunteer State Congressional delegation at reception and dance at Washington’s elegant Willard Hotel.  Tennessee’s bachelor senator, K. D. McKellar hosted a breakfast for his colleagues in the delegation and their wives.  Cornelia Park Byrns burned a steady trail of travel between Nashville and Washington, D. C. and she was equally prominent in social affairs in the state capitol as she was in the national capitol.  The Tennessean duly reported Mrs. Byrns hurrying from Nashville to stay at the Mayflower Hotel in Washington, D. C. where she would attend the convention of the Daughters of the American Revolution.

February also brought political news with W. D. “Pete” Hudson confiding he might very well run for Congress against Joe Byrns, Jr. according to the Jackson Sun.  “It is true I am seriously thinking about running for congress,” Hudson told a reporter.  “I have many letters from friends in this district promising me their support, but I have made no definite decision as to whether I will run.”  Hudson had been elected on a ticket with Prentice Cooper for governor and Tom Stewart for U. S. senator backed by McKellar and E. H. Crump and had five times been elected the mayor of Clarksville, Tennessee.  Hudson said if he ran for Congress, he would run as a “Roosevelt Democrat.”  Nor was Hudson the only potential challenger making rumblings about the coming congressional campaign.  Former congressman Dick Atkinson was feeling out supporters as to making a bid to reclaim his seat in Congress.  The Tennessean reported Nashville attorney George H. Cate was also pondering a congressional campaign.  Cate had been the state Commissioner of Institutions and Public Welfare.

A few weeks later, the Tennessean was speculating Pete Hudson would not make the race for Congress due to a singular factor: Senator K. D. McKellar.  According to the head of the Tennessean’s Washington Bureau, J. Lacey Reynolds, McKellar had not even spoken to Hudson about running for Congress when the Utilities Commissioner had visited Washington, D. C.  Reynolds said the deterring factor was “the common knowledge” McKellar “wants as much peace as possible in the Fifth District, especially this year when he is up for reelection.”  Reynolds thought a fight between Hudson and Congressman Byrns would be difficult for McKellar, as both of them were friendly to the senator.  Reynolds wrote without McKellar’s support, any Hudson congressional campaign “would be handicapped”, although the columnist readily acknowledged Hudson’s vote-getting ability in “the up-district counties.”

Lacey Reynolds proved to be wrong, as W. D. “Pete” Hudson announced his candidacy for Congress within a week of the publication of the article in the Tennessean.  Hudson was careful to distance himself from factionalism inside Tennessee’s Democratic Party, saying he was not aligned with any faction.  “I have not consulted or communicated with anybody who does not vote in this District,” Hudson said.  “I have no alignments with any political factions and I expect to stand on my own accomplishments as a public official and on my achievements as an individual.”

Pete Hudson had run for public office eleven times and never lost a race.  Hudson touted his own record, claiming he knew what it was to work for a living.  “I know the interests of the laboring people for I have been a laborer,” Hudson stated.  As a young man, Pete Hudson had worked in the steel mills of Gary, Indiana.  Hudson went on to say he knew the experience of farmers, as he was also farming “on a major scale.”  Likewise, he knew what it was like to be a businessman because “I am actively engaged in a successful business and have been a business man for twenty years.”  Lastly, Hudson claimed he knew the interests of the taxpayers “because I am one of the largest tax payers in the state.”  Evidently Pete Hudson had done rather well in business, originally having borrowed money to build in excess of 1,000 miles of lines through his Cumberland Electric Membership Corporation, serving some 4,000 or more families ion Montgomery, Robertson, Stewart and Sumner Counties.

Joe Byrns, Jr. could not have been especially pleased as W. D. “Pete” Hudson could finance his own campaign and was a serious threat to Byrns’ continued tenure in Congress.  Nor did the political prognosticators carefully watching the race for Tennessee’s Fifth Congressional district believe Hudson would be the only challenger to run against Byrns.  When informed of Hudson’s announcement, Congressman Byrns told the Tennessean he would certainly wage a “vigorous” campaign for renomination in the Democratic primary.  Former congressman Richard Atkinson had no comment on Hudson’s entry into the congressional race, but did not deny he might have an announcement of his own shortly.  Robert Benson, the sheriff of Robertson County was being touted as a candidate by some of his friends although he was saying little about a possible campaign for Congress.

The young congressman did get some favorable publicity when he and his mother gave a pulpit and altar table to the West End Methodist Church in honor of the late Speaker Joseph W. Byrns.  The chancel of the church had been under construction for ten years.  Cornelia Park Byrns, perhaps thinking of the coming campaign, returned to Nashville where she hosted a luncheon in honor of Mrs. James G. Stahlman, wife of the publisher of the Nashville Banner.  Cornelia, wearing a “black wool coat and plaid skirt and huge black and white Breton sailor” accompanied her husband and mother-in-law to an informal party given by Missouri congressman Richard Duncan and his spouse.

Another candidate joined the race for Tennessee’s Hermitage District with the announcement by M. S. “Monty” Ross, a former assistant city attorney.  Ross had been an “also-ran” in the 1938 congressional race between Joseph W. Byrns, Jr. and Richard M. Atkinson and made, at best, a rather anemic showing.

James A. Farley, chief dispenser of patronage in Franklin’s Roosevelt’s New Deal administration, Chairman of the Democratic National Committee and Postmaster General of the United States, visited Nashville to speak to the state’s postmasters.  During his speech, Farley lavished praise upon Senator McKellar and “spoke highly of” Tennessee’s junior U. S. senator, Tom Stewart and Congressman Joe Byrns, Jr.

On April 3, 1940 the announcement by former congressman Richard M. Atkinson that he was running again was carried by newspapers all across Tennessee.  The race in Tennessee’s Hermitage District would be watched throughout the Volunteer State.  Although both Pete Hudson and Dick Atkinson had announced their candidacies, they delayed opening their campaigns due to the fact Congress had not adjourned by early June.  Neither Atkinson nor Hudson wished to be accused of having taken advantage by campaigning while Congressman Byrns was still in Washington, D.C. and on the job.  Monty Ross went ahead and made a speech in Hartsville, Tennessee, but few people paid much attention to his campaign.  Atkinson and Hudson, unlike Monty Ross, were politically shrewd enough to recognize the profound concern of most American citizens about the war raging in Europe, as well as the increasing belligerence of the Japanese Empire in the Far East, it was best to wait to begin campaigning once Joe Byrns, Jr. was home to defend himself.  With Byrns serving on the House Military Affairs Committee, it gave the incumbent an advantage in a time of turmoil.  Voters inside Tennessee’s Hermitage District were reminded of Byrns’ committee assignment as he was one of the members of the Military Affairs Committee to be selected to inspect “seaboard defense fortifications and plants” on the East Coast.  Byrns had been designated by the Chairman of the Military Affairs Committee, Andrew Jackson May of Kentucky, to take the Kentuckian’s place on the trip.  Congress was then in recess for the Republican National Convention.

The assignment gave Congressman Byrns an opportunity to perform work that most voters would perceive as vital to the interests of the country.  It also gave him valuable publicity at home and Byrns made the most of it.  Tennessee newspapers covered the announcement by Congressman Byrns following his visit to New England it was his opinion coastal defenses there were in a “grave condition” should any foreign power attempt an invasion.  Byrns readily admitted the notion of an invasion by a foreign country was “possible but extremely improbable”, yet he felt “we must be prepared to resist invasion.”  Byrns suggested to better protect New England and the United States the country needed a much expanded air force, as well as the placement of anti-aircraft batteries and “bomb-proofing for coastal guns.”

Dick Atkinson and W. D. “Pete” Hudson could only seethe while Joe Byrns. Jr. used his incumbency to full advantage.