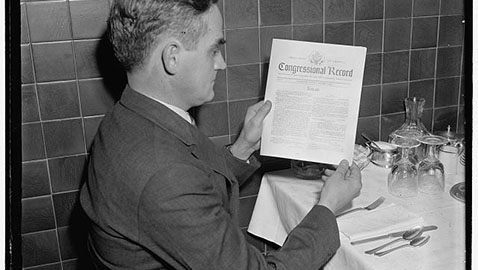 Congressman Joseph W. Byrns, Jr. had first been elected to the U. S. House of Representatives in 1938, toppling incumbent Richard M. Atkinson in a hard fought campaign inside the Democratic Primary. Tennessee’s “Hermitage District,” so named because the Fifth Congressional district contained the home of General Andrew Jackson, founder of the national Democratic Party. As befitting the home of General Jackson, the Hermitage District was solidly Democratic. For twenty-eight years, the district had been represented in Congress by the congressman’s father, the late Joseph W. Byrns. The elder Byrns had slowly climbed the congressional seniority ladder, becoming Chairman of the House Appropriations Committee, Majority Leader and finally rising to the pinnacle of the House leadership with his election as Speaker. Jo Byrns thoroughly enjoyed his prominence as Speaker of the House and was genuinely well-liked by his colleagues, but his enjoyment was short-lived. Speaker Byrns died suddenly on June 4, 1936. Byrns served as Speaker of the House from January 3, 1935 until his death.

Joseph W. Byrns, Jr. was the late Speaker’s namesake and only child. Friends of Jo Byrns filed the necessary papers qualifying the son to run in the 1936 election to succeed his dead father, but the younger Byrns refused to make the race. Richard M. Atkinson, a former District Attorney General for Davidson County, won the Democratic primary by exactly 13 votes over his nearest competitor for the nomination, Will T. Cheek. Joe Byrns, Jr. contented himself by working as an attorney for the Home Owners’ Loan Corporation and in 1937 Tennessee’s United States senators, Kenneth D. McKellar and George L. Berry, proposed Byrns to head the HOLC in Tennessee. Oddly, the nomination stalled, which was especially rare for any nomination backed by Senator McKellar. Tennessee’s senior senator was a stalwart of the New Deal administration and controlled most of the patronage distributed by the Roosevelt administration in the Volunteer State.

As the nomination of Joe Byrns, Jr. to head the Tennessee HOLC was pending, Congressman Dick Atkinson managed to get into a nasty disagreement with Senator McKellar. Perhaps thinking of the coming Democratic primary election, Atkinson proposed dismissing William M. Gupton, Nashville’s Postmaster. Usually, the sitting congressman from the President’s political party has the right to name the postmaster of his home city and Atkinson was well aware Gupton had been appointed upon the recommendation of the late Speaker Jo Byrns. Quite likely, Dick Atkinson suspected Gupton would aid the younger Byrns however he could should the Speaker’s son run in 1938. Atkinson had not consulted with Senator McKellar before making his recommendation of dismissing the Nashville postmaster at the conclusion of his present term. Much to Atkinson’s surprise, Senator McKellar did not agree with his recommendation. Worse still, McKellar was Chairman of the Senate’s Post Office & Post Roads Committee and all nominations for postmasters required the advice and consent of the United States Senate. McKellar wrote Postmaster General James A. Farley he would consider it a personal “affront” should Gupton be removed from office. McKellar enjoyed a well-deserved reputation as a legendary political feudist who expected no quarter in a brawl and gave none. The Gupton affair ended as quickly as it began and was little more than an embarrassment to Congressman Atkinson.

As Congressman Atkinson had expected, Joe Byrns, Jr. announced his candidacy and the two fought a spirited campaign. Byrns ran on a single issue: support of President Franklin D. Roosevelt. Atkinson, rightly or wrongly, was perceived as the more conservative of the two candidates as he had wandered off the Roosevelt reservation on a few occasions. Dick Atkinson defended himself as an independent thinker who put the best interests of his constituents first and foremost. Byrns edged out Atkinson inside the Democratic primary.

There was no question but what the Democratic leadership in the House of Representatives welcomed the son of the late Speaker Byrns to their body. Byrns enjoyed attention, publicity and promotions quite rare for a freshman Member of Congress. Originally appointed to the House Post Office & Post Roads Committee, Joe Byrns, Jr. was promoted to the important House Committee on Military Affairs following the death of his fellow Tennessee representative Clarence W. Turner of Waverly.

A sitting congressman is usually considered most vulnerable in seeking his or her second full term or after a very long time in office. Joe Byrns, Jr. was running for reelection in 1940 and faced two formidable challengers inside the Democratic primary. W. D. “Pete” Hudson had served five two-year terms as mayor of Clarksville, Tennessee and had won a statewide election in 1938 as a member of the Railroad & Utilities Commission, the forerunner of the Public Service Commission. Hudson had run on a ticket with Prentice Cooper for governor and Tom Stewart for U. S. senator, which had the backing of Senator McKellar and E. H. Crump, leader of the Shelby County political machine.

Former congressman Richard Atkinson had indicated he, too, would seek to regain his seat in Congress, but neither Hudson or Atkinson had formally opened their congressional campaigns in deference to Congress not having adjourned. Most Tennesseans and Americans were profoundly concerned by the war raging in Europe, which would escalate into World War II, as well as the continued aggression of the Japanese Empire in the Far East. The concern about foreign affairs and war gave special meaning to Joe Byrns, Jr.’s assignment on the House Military Affairs Committee.

Congressman Byrns returned to Washington, D. C. on July 1, 1940 following an inspection tour of the Atlantic seaboard’s defenses as the special designee of House Military Affairs Committee Chairman Andrew Jackson May of Kentucky. Pete Hudson spoke in Springfield, Tennessee on July 6, 1940 before “a good-sized Saturday crowd” according to the Nashville Tennessean. Hudson criticized both Congressman Byrns and former congressman Dick Atkinson for not being successful businessmen and depending upon their government salaries for a living. “With men of this caliber in Congress, we cannot prepare for the challenges of our security,” Hudson thundered. Of course, one wonders if anyone in the audience stopped to think Hudson was himself collecting a full-time salary from the State of Tennessee and served on the entity tasked with regulating utilities when he owned a utility company.

Hudson told his listeners neither Atkinson nor Byrns had asked “you to judge a tree by its fruit because they have borne no fruit.” Commissioner Hudson clucked, “Their favorite political desire is to stir up bitterness and to foment personal hatred.” Evidently Pete Hudson had been stung by an editorial published in the Tennessean, which called upon him to resign his seat on the Railroad & Utilities Commission if he wished to run for Congress. Hudson cited the examples of several Tennessee politicians, including Cordell Hull, who had held one office while seeking another. As to the criticism that had been leveled by the Tennessean that he was merely in the second of a six year term of office, Hudson bragged he had carried out “practically his full program” and now believed he could help develop the Cumberland River through membership in Congress instead of service on the Tennessee Railroad & Utilities Commission. Once again citing the example of Cordell Hull, Hudson pointed out Hull had been elected to a six year term as United States senator in 1930, only to resign in 1933 to accept appointment as Secretary of State. Hudson insisted he wanted “to serve my country where I can do the most good.” Hudson also noted “Little Joe and Prevaricating Dick” had no children, something of a tender topic especially considering the most popular politician in the State of Tennessee was a bachelor, without a wife or children, Senator K. D. McKellar. Yet Hudson gave all credit for the numerous projects and appropriations showered upon the Hermitage District to Senator McKellar, dismissing the efforts to secure those same tax dollars and projects by Congressman Byrns as meaningless. As to Dick Atkinson having any responsibility for bringing any good thing to Tennessee’s Fifth Congressional district, Pete Hudson scoffed the former congressman never bothered to “turn his hand.”

While former congressman Richard Atkinson made public an intensive speaking schedule through the numerous towns and hamlets inside the Hermitage District, Joe Byrns, Jr. was on his way back from the Panama Canal Zone, stopping in Miami to give an interview to the press. Congressman Byrns thought the Panama Canal defenses adequate and likely impressed some of his constituents when he said, “I am not at liberty to discuss gun emplacements or anti-aircraft protection, but I can say this – – – the protection against air attacks is perfect and any hostile move against the canal from any quarter would be met by a force which undoubtedly would surprise any enemy.”

As Joe Byrns, Jr. managed to stay above the fray and appeared statesman-like to many voters, his opponents hurled charges and accusations at one another. Former congressman Dick Atkinson complained about the utter “impropriety” of Pete Hudson running for Congress while a sitting member of the Railroad & Utilities Commission. Hudson snapped Atkinson and Byrns had both made a living off the taxpayers and the incumbent’s record was nothing but a “blank.” Oddly, Atkinson arrived at the Burrus Filling Station in Nashville to make a campaign stop and barked Joe Byrns, Jr. was “too little to hold the job” in Congress. Atkinson delightedly quoted the editorial in the Tennessean saying Hudson’s campaign for Congress was “highly improper” while sitting on the Utilities Commission. “Name any law or benefit for this district which Byrns has introduced or supported in Congress,” Atkinson dared his listeners. “I will withdraw from the race if anyone present can show where Byrns’ representation has benefitted the district.”

Apparently the two challengers left no nook or cranny inside Tennessee’s Hermitage District unvisited as Pete Hudson was campaigning at McMahon’s Store while Atkinson was orating at the Burrus Filling Station. Once again, Hudson bragged he had enjoyed success as a farmer and businessman, something neither Joe Byrns, Jr. or Dick Atkinson (both of whom were lawyers) had attained. “Why, Joe Byrns never ate a piece of bread in his life that wasn’t paid for by the taxpayers,” Hudson cried, a reference to the fact Byrns’s father had been the long-time congressman from the Fifth District. Pete Hudson said he had never inherited much of anything nor had he received anything of value from “easy sources” and wondered, “If a man can’t govern his own affairs, how can he govern those of the people?”

Hudson scoffed that Joe Byrns, Jr. remaining on the job in Washington was nothing more than a “gag” and were it necessary, it would be “assigned to a man of experience.”

Former congressman Richard M. Atkinson brought his campaign to Montgomery County, home to Utilities Commissioner W. D. “Pete” Hudson and made a fiery speech attacking both his major opponents. Atkinson snarled Byrns was a “disgrace to Tennessee” and that Hudson’s supporters were trying to leverage those with business pending before the Railroad & Utilities Commission into support for Pete Hudson. Atkinson gave Pete Hudson a dose of his own medicine by effectively using ridicule. The former congressman was amused Hudson claimed to be a farmer, nothing the only real estate Hudson paid taxes on inside Montgomery County was the candidate’s own “hundred thousand-dollar home” in Glenwood. Atkinson acknowledged, “Pete has made a fortune here” and was happily “taking everything he could get his hands on.”

The campaign for the Democratic nomination for Tennessee’s Hermitage District was well under way.