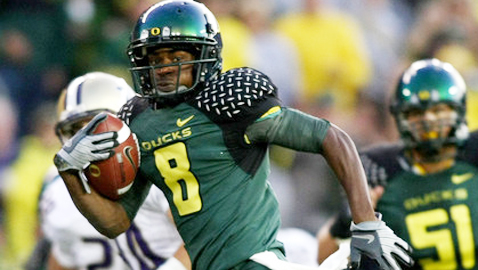 (This is the fourth and final part of a series on Terence Scott, former Central High football standout who went on to star at the University of Oregon in 2008. Scott crossed many hurdles growing up in Knoxville, and then chased his dream to play Division 1 football. He plans to return home soon and wants to help Knoxville pull together and put an end to recent gun violence and gang activity that has claimed innocent lives.)

Terence Scott was excited about a new chapter in his life in 2010. He was going to be a father.

Being with Pamela through the pregnancy and birth also meant more to him than continuing as a practice player with the B.C. Lions in the Canadian Football League.

“To me and how I took it was – football handed the baton to my daughter,” recalled Scott while back home in Knoxville during the holidays.

Having been in football so long, including four years in college, adjusting to the “real world” for Scott wasn’t easy at first.

“It was hard for me in the beginning to figure out where I would fit in and what I was going to do next,” he said. “I figured it out slowly but surely.”

“That’s why it took me so long to come home, because I thought I was a failure,” said Scott, who had always enjoyed success in football and finished what he started.

Over time, however, he realized he hadn’t failed. He just took a different road. 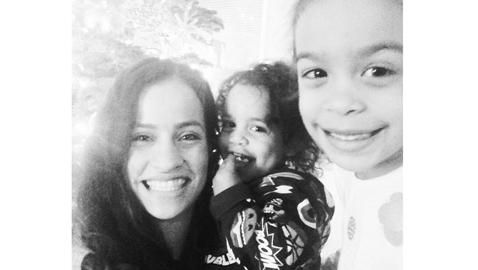 My family,” wrote Terence Scott when he texted this photo for The Knoxville Focus. Left to right – Pamela, Terence Jr. and Jamiah.

Scott, whose daughter is now 5 years old, continued to reside in Eugene, Ore., where he ranked among the top wide receivers in the Pac 10 Conference at the University of Oregon as a senior in 2008.

He has directed non-profit youth football camps, “giving back” to kids unable to attend University of Oregon’s camps, and worked in sales, starting off selling RVs.

“And I’ve went out and told my life story, and how I got from point A to point B,” he added.

During his recent visit home, Scott heard about the shooting that claimed the life of Zaevion Dobson, a Fulton High sophomore, who was shot Dec. 17 as tried to shield two girls from gunfire in the Lonsdale community. His act of heroism drew recognition from President Barack Obama and was even told in a CBS television feature prior to Super Bowl 50.

“I’ve often wondered how his mother felt on Christmas morning,” said Scott, “or any day. That’s the tough part about it. Being a man now and having children, it’s sad.”

Scott said he plans to move back to Knoxville and wants to do what he can to help pull the community together and end gun violence and gang activity.

“I just want to come back and be a piece of the puzzle,” said Scott. “I don’t know where I fit in to help out, but I know I fit in somewhere.”

One thing in particular, “I want to get out to the high school games and support the youth,” he added.

“We’ve got to pull together as one for our kids and babies. And the killing that’s going on, to the hero and his family and other kids that have lost their lives, that shouldn’t be accepted in Knoxville.

“Knoxville is a place that I spent a lot of time thinking about when I was gone, how respectful of a place it is and the hospitality we have back here. Coming back home and hearing this, we’ve got to do something about it.”

Terence also said he wants to be a part of his nephews’ and nieces’ lives because he’s missed so much living on the West coast.

Three of his five nephews still attend high schools in Knoxville and Harold was a freshman receiver and defensive back at Powell this past season. He favors his uncle quite a lot.

“I tell Harold all the time – just have fun,” said Scott. “Good is the enemy to great.”

Translation: Don’t be satisfied with being good.

Scott had to overcome many obstacles growing up in Knoxville, including not having a relationship with his father, Jimmy Lee Scott. Two months ago, Terence, who turns 30 in September, sought to contact his dad before it was too late. His dad lives in Macon, Ga.

“I reached out to him with forgiveness and we text everyday now,” said Scott.

“That phone call was all my mom’s doing and how she raised me.

“He thanked me for calling and said he appreciated it. It made me feel good as a man now.”

As for his own children, Jamiah and 18-month-old Terence Jr., Scott has told them, “No matter what happens, you guys will always be a package because of what happened in my childhood.”

Terence was 19 years old and Pamela 18 when they first met. He was at the College of the Canyons. She’s from Hollywood. They didn’t get married and are not together now, he said. “But we’re best friends.”

Scott wanted to send out a “thank you” to Knoxville for supporting him over the years.

Scott said Christy Prudencio was an “amazing” guidance counselor at CHS who motivated him to get his academics in order. He also said assistant track coach Rick Grim and teacher Carmelita Perry went the extra mile to get him ready for college by working with him at lunch time and after school, respectively.

Scott visited high school teammate David Gaston while in Knoxville. They trusted each other as twin punt returners for the Bobcats back in the day. Scott also went and watched David’s son, 7-year-old David Jr., in a flag football game at Hardin Valley and spoke to the team.

“My number one thing to tell them at that age is have fun,” said Terence. “Just enjoy the game, appreciate the game and don’t get caught up in the score. Just have fun.”

J.D. Lambert was Scott’s economics teacher at CHS his senior year and remembers principal John Miller having Terence speak to the incoming freshmen class about the importance of academics.

Lambert also recalled a time when he was athletic director at Austin-East and called on Scott to council one of his student-athletes who had gotten a little out of line in the classroom. Lambert thought of Scott because the young man was wearing an “Oregon shirt” one day.

“With Terence having played at Oregon, I showed him Terence’s career stats and told him he had played in the CFL,” recalled Lambert. “He said ‘Oh!’ and was impressed with those numbers. So I got hold of Terence and he talked with this kid for 30 to 45 minutes on the phone. They exchanged cell phone numbers and Terence continued to check on him. This was a kid Terence had never met but he knew this was a student-athlete and he had a chance to help him.”

Lambert, now the athletic director at Central, said Scott is a great example of “sticking with it” when confronted by obstacles in life.

“A lot of times kids think that people who are successful don’t have obstacles in their lives, but as we get older, we realize everybody has obstacles and you can either turn them into a roadblock or a stepping stone,” said Lambert. “Terence did that and I never once heard him complain.”

Lambert is pleased his former student is coming back home and hopes to see him a lot at Central.

“We are just very proud of what Terence has accomplished in earning his degree and now wanting to come back and be a part of the Knoxville community,” added Lambert.

“I don’t know what piece of the puzzle Terence will fill, but I know with his background, experience and personality, he will be able to find some way of fitting in. We would love to have him be a part of high school athletics in general or at Central High School as a guest speaker or just coming by to visit with our kids and mentor our students.”