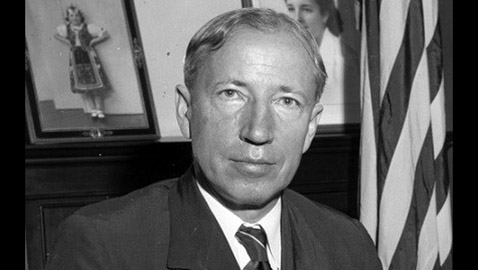 For decades, Democrats in Tennessee had enjoyed the luxury of sailing through general elections without having to worry about the results. Republicans in Tennessee talked a good game and usually had nominees for both the governorship and seats in the United States Senate, but few serious candidates offered themselves up as sacrificial lambs. Most statewide campaigns waged by Republican candidates were not well funded. That changed in 1948 when Carroll Reece, immediate past chairman of the Republican National Committee, came home to seek a seat in the U. S. Senate. Reece was certainly well qualified to serve in the Senate, having been in Congress for twenty-six years. Reece had also been Tennessee’s Republican National Committeeman since 1939. Carroll Reece was widely known and highly respected inside the councils of his own party. Reece was also one of the very few Republicans to hold elective office below the Mason – Dixon Line.

Tennessee is divided into three “Grand Divisions,” each representing a separate part of the state. East, Middle and West: each is different in topography as well as its politics. The political divisions dated back to the Civil War when East Tennessee had finally voted against succession, while both Middle and West Tennessee favored it. Much of East Tennessee was occupied by Confederate forces and the mountainous region of the state remained reliably Republican, as it does to this day.

Reece’s running mate during 1948 was country music entertainer Roy Acuff, even then a big celebrity. Acuff was as well-known at the time as any person could be as the star of radio, motion pictures and the Grand Ol’ Opry. Acuff campaigned with the help of his band, the Smoky Mountain Boys, and Democrats were soon made very uneasy by the huge crowds coming to Republican rallies, especially in counties and cities that had been heavily Democratic for years.

Tennessee Democrats had fought a bitter primary contest for both the nominations for the governorship and the United States Senate. Senator Tom Stewart was upset in the primary by Chattanooga congressman Estes Kefauver when E. H. Crump, leader of the Shelby County machine, gave his backing to a third candidate. Governor Jim Nance McCord could not carry the heavy burden of having instituted the sales tax in Tennessee. While the lion’s share of the sales tax went to fund education, both higher and secondary, and free textbooks for school children became a reality, Tennesseans demonstrated yet again their dislike of taxes. McCord lost to former governor Gordon Browning, a veteran of Tennessee politics. Browning had served for twelve years in Congress, representing a rural West Tennessee district before he ran for the United States Senate against incumbent Nathan L. Bachman and lost the primary. Browning was a very stubborn man and equally determined; the former congressman ran for the Democratic nomination for governor in 1936 and won with the support of E. H. Crump. Browning never let go of his greatest political ambition – – – a seat in the United States Senate – – – until he had given up elective office entirely. When Nathan Bachman died suddenly, Browning hurried to Memphis to confer with Mr. Crump. Each man had his version of how the meeting went, although there were some things both agreed upon. Crump had witnesses who confirmed his account of what happened. Governor Browning had proposed that he run against his own appointee to the U. S. Senate, George L. Berry, with Crump’s support. Crump would back Lewis Pope for the governorship in the 1938 election and in turn, Pope and Browning would support Crump for the United States Senate against Kenneth D. McKellar in 1940. Crump told Browning had the governor wished him to be in the Senate, he could have appointed him to fill the vacancy caused by the death of Bachman instead of Berry. Nor was Crump delusional enough to think he could beat his friend Senator McKellar in a statewide primary. The Memphis Boss was already uneasy by appointments made by Governor Browning of individuals with ties to disgraced U. S. senator, publisher and financier Luke Lea. Moreover, Crump positively loathed Lewis Pope who had twice bolted the Democratic Party to run for governor as an Independent. The end result was a political battle to the death between McKellar and Crump and Browning and his allies. McKellar and Crump won that fight.

Gordon Browning’s relatively easy victory in the 1948 Democratic primary had to be the sweetest of his long political career. Yet Crump had finally bolted the Democratic Party, refusing to support President Harry Truman. Crump and the Shelby County machine preferred States’ Rights candidate Strom Thurmond instead. There were more than a few Democrats in Tennessee uneasy that Crump might covertly support Carroll Reece and Roy Acuff in the general election.

When Kefauver came to campaign in Knoxville in September, the candidate was introduced by former mayor John T. O’Connor. “I’m for Estes Kefauver and I love him for the enemies he has made,” O’Connor told an audience. “Every reactionary newspaper from Carter to Shelby; every foe of TVA; and everyone who gets his meal ticket from the private power trusts opposes him.”

Speaking to the same audience, Kefauver noted Carroll Reece’s opposition to much of Franklin Roosevelt’s New Deal program. While in Congress, Reece had opposed several of the New Deal’s alphabet agencies and programs, including AAA, OPA, price control, rural electrification, and some national defense measures, Kefauver said. “The old guard Republicans throughout all these years have sought to cripple and damage the TVA,” Kefauver insisted. “Look at the vote on the various TVA appropriations, You will see what I mean.” Congressman Kefauver was certainly right inasmuch as most Republicans in the House of Representatives were opposed to the Tennessee Valley Authority’s appropriations; what Kefauver failed to point out was that Carroll Reece always voted for those same appropriations.

When Reece suggested Tennesseans compare his record in Congress to that of Estes Kefauver, the Chattanooga congressman declared he was ready and willing “any time and on any matter” to make that comparison. Kefauver immediately issued a challenge to the Republican nominee to debate the issues before the Tennessee Junior Chamber of Commerce convention in Nashville, which would meet on October 5.

With Kefauver’s invitation to compare records and debate, the Bristol News Bulletin announced the “fiery battle between Estes Kefauver and B. Carroll Reece for election as United States senator from Tennessee has started in earnest.”

During much of September, the press in Tennessee was busily writing about a prospective debate between the senatorial contenders, Carroll Reece and Estes Kefauver. That debate was the subject of much editorial comment in Tennessee’s daily newspapers. The Nashville Tennessean noted Reece “suddenly becomes a shrinking violet” at the moment Kefauver issued a challenge to debate. The Tennessean scoffed that the former congressman would only agree to a debate “before a microphone in the secluded quiet of a radio broadcasting station.” “Mr. Reece’s mistake was the hasty acceptance of Rep. Kefauver’s challenge,” the Tennessean editorial cried, “for no sooner were the words out of his mouth than it became clear that he shrank from the prospect.” The Tennessean was practically an extension of the Kefauver senatorial campaign. Its publisher, Silliman Evans, was perhaps the notable supporter of Kefauver through the arduous and hard fought primary and was doubling down on the general election.

Even Reece’s hometown newspaper, the Johnson City Press Chronicle, was critical of the former congressman, saying in its own editorial “Mr. Reece accepted Estes Kefauver’s challenge” only to begin “to crawfish.” Nor was the Knoxville News-Sentinel any kinder to the GOP senatorial candidate. The News-Sentinel editorial noted Roy Acuff and his Smoky Mountain Boys had traveled to Texas to fulfill a contractual obligation and wondered if Carroll Reece was continuing the speaking tour of Tennessee on his own? “Not on your life,” the News-Sentinel editorial huffed. “He has cancelled all dates, too, until Roy gets back.” “We suggest this period of enforced idleness gives Reece a chance to accept Estes Kefauver’s challenge to a joint debate from the same platform.”

The Memphis Press-Scimitar jeered in an editorial, “Not much point in speaking when there are no crowds, eh, Carroll?”

If the Nashville Tennessean was the daily newspaper in Tennessee that was highly supportive of Estes Kefauver, its polar opposite in the state was the Knoxville Journal, whose editor, Guy Smith, was an active Republican and state chairman of the Tennessee Republican Party at the time. The Journal was the voice of Republicanism in East Tennessee. The Knoxville Journal suggested Kefauver’s proposed format of a debate before an audience was so it “could be packed with some of his CIO pals.”

The Clarksville Leaf-Chronicle opined, “If Reece is wise he will stand pat on the studio debate” and remain “beyond Kefauver’s reach.” The Leaf-Chronicle thought “Kefauver will hardly agree to a formal debate in an empty studio” and deprive himself of the reaction of a live audience.

For those who have never been deeply entwined or involved in a political campaign, they are more rife with wild rumors than any neighborhood beauty shop. One of the more entertaining rumors of the fall campaign was that Senator Tom Stewart would run in the general election as a States’ Rights Democrat and siphon off votes of Democrats from Kefauver, which would almost certainly guarantee the election of Carroll Reece in the general election. As the rumor went, Stewart would be rewarded by the expected incoming Republican administration with an appointment to a judgeship.

Carroll Reece certainly believed the States’ Rights ticket would cut into Harry Truman’s majorities in much of the Southland. While meeting with Governor Thomas E. Dewey, the GOP presidential nominee, at Albany, Reece told reporters he expected Dewey to carry Tennessee. The former congressman told the newsmen he also expected to defeat Estes Kefauver in the Senate race. The former congressman ticked off five states he believed the “Dixiecrats” would actually carry in the general election, naming South Carolina, Mississippi, Alabama, Georgia, and Louisiana. Reece’s prediction was right in four out of five instances, as Truman carried Georgia easily. Reece also pointed out three of Tennessee’s own electors were committed to vote for the ticket headed by Strom Thurmond, although only one faithless Tennessee elector abandoned the regular Democrats.

Democrats tried to reassure themselves at the crowds drawn by Roy Acuff and the Smoky Mountain Boys during the month of September. Guy Smith taunted the fearful Democrats in his editorials in the Knoxville Journal, which compared the crowds drawn by Democrats senatorial nominee Estes Kefauver and Acuff and Reece when they all appeared in Camden, Tennessee. Smith noted “the comparison in crowds… would seem to justify the confidence of Reece and Acuff supporters… that a victory for them is in prospect.”

The 1948 race for the United States Senate would prove to be the first really serious effort by Republicans in Tennessee to win a seat in the Senate since the first popular election of U. S. senators in 1916. The issues between the two candidates can easily be summarized; Carroll Reece said Estes Kefauver was a dangerous “radical” who “has followed the left movements” and picked up a tactic first employed against the Chattanooga congressman by E. H. Crump during the 1948 primary campaign, by comparing Kefauver’s voting record in Congress to that of Communist-leaning Vito Marcantonio. Kefauver retorted Reece was a spokesman for reactionary and predatory business interests and “at heart” a foe of the Tennessee Valley Authority.

Guy Smith published an editorial that declared, “Estes is Leftist.” Smith’s editorial stated no person “possessed of his senses” questioned Kefauver’s close association with the CIO-PAC. Smith wrote, “The Senatorial race in Tennessee this year, stripped of any emotion or heated partisanship, simply boils down to the question of the kind of ideology Tennesseans want in their senator. Only forty percent of the Democrats wanted the leftist ideology of Mr. Kefauver as revealed in the recent primary.”

So indeed had the 1948 Senate race begun in earnest.