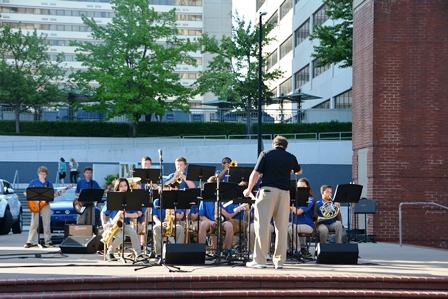 Although the school year had ended for members of the Karns Middle School Jazz Ensemble, they took to the stage again to give an outstanding show on Tuesday, May 24 on Market Square.

Many folks crossing the square for different reasons, myself included, stopped to listen to these youngsters and appreciate their enthusiasm.

Mark Bowling, teacher and band leader from Karns Middle School, spoke to The Focus after the performance. “It’s amazing and shows the dedication to this band that the students at Karns have. These kids could have been out playing in a pool or playing with friends—they could have done anything other than this, but they all came back  to play one last time. It was an amazing gig. We had a good time.”

The music was flawless. After winning over Market Square, band members were high-fiving each other, shoulder bumping, hugging each other, and beaming with pride the same way a sports team beams with pride after winning a championship. This is a family, a team – much more than just a program.

“We spend a lot of time practicing together; we have our pitfalls and successes together. We are very much a family. We live and die by each other’s success,” said Mr. Bowling.

The ensemble program meets twice a week after school and has about 30 students. Any jazz instrument is accepted. It is a part of the Karns Middle School band program which has about 260 students.

The Jazz ensemble is small and mobile which allows them to get out and play venues like Jazz on the Square.

If Market Square is the heart of Knoxville, then on this night, these young students were the soul of Knoxville, representing everything that is great with Knoxville! Young individuals, out of school, on summer vacation, performing a service for the community. For the love of music, for the support of one another, and for the pride of their school.

It has always been said that the band is the last to leave, the last to abandon ship. Even after the close of the school year, this band continued to play on.