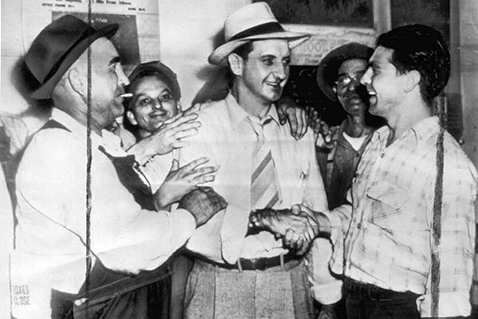 Even today people remember the “Battle of Athens.”  At the time it occurred in 1946, it was also known as the “Battle of the Ballots.”  The closest thing the election battle resembled was a Latin American revolution.  While tensions had been simmering for some time, what ignited the flame was the brazen theft of a ballot box.

It remains a significant event in Tennessee politics as veterans returning from the Second World War refused to be intimidated by a political machine that, until Election Day, was thriving.  That machine was centered in McMinn County and headed by Paul Cantrell, who was a member of the Tennessee State Senate.

Like neighboring Polk County, having control of the sheriff’s office was a necessity for the machine to function efficiently.  Paul Cantrell had been sheriff before going to Nashville.  Cantrell was closely allied with the Biggs machine in Polk County and their influence was not entirely confined to their home counties.

As veterans in the bloodiest war ever known on the face of the Earth, returning GIs became increasingly discontented with the rule of the Cantrell machine.  Virtually every war supplies candidates for elections after the conflict is fought and won, or in the case of the Civil War and the South, lost.  Former Confederate officers supplied dozens of candidates for generations for political offices throughout Tennessee and the South.  More Republican-inclined East Tennessee preferred those candidates who had been affiliated with the Union, like Andrew Johnson, while Middle and West Tennessee routinely elevated former Confederates to high office.  Southern states had a habit of electing former Confederate generals to Congress, especially the United States Senate.  In Alabama, former General Joseph Wheeler served in the House of Representatives while two former generals, Edmund Pettus and John Tyler Morgan, sat in the Senate.

So, too, was Tennessee represented for a time by two former Confederate generals in the United States Senate.  Both had previously served as governor before being elected by the Tennessee General Assembly to sit in the U. S. Senate.  William B. Bate, a native of Middle Tennessee served in the Senate from 1887 until his death in 1905.  Bate served alongside Isham G. Harris, also a former Confederate general,  who spent twenty years in the United States Senate.  Oddly, both Senators Bate and Harris had been elected to a fourth term but died early in their new terms of office.  Only one U. S. senator from Tennessee has served out a fourth term, Kenneth D. McKellar.  McKellar was elected to the Senate six times by the people of Tennessee and was not only Tennessee’s longest serving United States senator, but also the first person to be elected to the United States Senate by popular election in the Volunteer State.

George Washington Gordon, another former Confederate general, served in the Congress, representing Shelby County in the House of Representatives.  The last Civil War veterans to serve in Congress were both members of the U. S. Senate.  Francis Warren had fought for the Union and was a long-serving senator from Wyoming (and the father-in-law of General John J. “Black Jack” Pershing of World War I fame).  Charles Thomas, born in Georgia, had fought for the Confederacy as a teenager and went on to be elected to the United States Senate from Colorado and served until 1921.  Warren died in office in 1929 at age eighty-five.

But I digress.  The point being veterans of every war return home and replace many incumbent officeholders from the courthouse to the White House.  Two such examples are Ulysses S. Grant and Dwight D. Eisenhower.  Carroll Reece was a hero of the First World War and promptly returned home to Tennessee to oust an entrenched incumbent who had served in Congress for a decade.

The Cantrell machine apparently did little to make returning veterans feel like they were an important part of the community.  The always-fatal mistakes of those chieftains who run political machines are becoming too arrogant and self-satisfied.  Paul Cantrell’s machine had ruled McMinn County for ten years before it fell.

While his friend and contemporary Burch Biggs looked every bit the part of a rural political boss, Paul Cantrell more closely resembled an accountant or what he actually was professionally, a banker.  Bespectacled and bald, neatly dressed, Paul Cantrell’s physical appearance did not conjure to mind images of a political boss.

Of course, political bosses and newspapers have long been at odds and publishers and editors find politicians easy pickings as targets of scorn, ridicule and contempt.  Some, especially the colorful Ed Crump of Memphis, frequently gave as good as he got.  Willard Yarborough, a reporter for the Knoxville News-Sentinel and sometime politician (he served on the Knox County Court and was the Democratic nominee against John J. Duncan for Congress in 1964), wrote the effort by the returning veterans was shaping up to be the “most heated political campaign in a decade.”  The ex-GIs had formulated a ticket sponsored by their self-named “GI Non-Partisan Ticket” to challenge the candidates and incumbent sponsored by the Cantrell machine.  By early July, Yarborough reported the “campaign already has drawn blood and there is the likelihood that more fireworks” would be in the offing “between now and election day.”  The Cantrell Democratic machine was already divided internally, which aided the cause of the GIs who were allied with local Republicans.  Yarborough noted the Cantrell Democrats were “unperturbed” by the intensive and aggressive campaigning by the GI candidates.  That underscored one of the greatest failures of candidates and political organizations since the beginning of time: complacency.   As Willard Yarborough wrote in an excellent series of articles on the Cantrell machine, the Cantrells had “been cussed and discussed by their enemies” for a decade yet they had “continued to ride out the storms that brew over their determined dynasty and still rule supreme.”

Paul Cantrell and his allies had successfully importuned the Tennessee General Assembly to redistrict the County Court, which shifted control of McMinn County from the Republicans to the Democrats.  Thereafter, the Cantrell machine became solidly entrenched.  The five Cantrell brothers all lived in Etowah, but the most politically active of the siblings were Paul and Frank.  Frank Cantrell was the mayor of Etowah, while Paul was running to return to the sheriff’s office, which he had held for three terms previously.  Incumbent sheriff Pat Mansfield was running to succeed Paul Cantrell in the Tennessee State Senate.  In essence, Mansfield and Paul Cantrell were switching jobs.

Local Republicans had made the task of the GIs easier by refusing to field their own candidates in the county general election, instead backing the slate of the Non-Partisan veterans.  The GIs had met in a convention where a GI identification was required to admit delegates.  Ads placed in newspapers prior to the convention blared: “If you are interested in cleaning up McMinn County and the return of good, clean, honest, efficient government, don’t fail to attend this meeting.”  The candidates nominated by the veterans appeared to be as clean-cut as their freshly scrubbed faces in the newspapers.  Thirty-three-year-old Knox Henry was the Non-Partisan candidate for sheriff, a hardened veteran of the European theatre of the Second World War.  Twenty-nine-year-old Frank Carmichael was the son of a farmer who had entered the Army as a private and rose to the rank of major in the European war.  Carmichael had been awarded the Purple Heart and still lived with his parents on their farm, which was nestled between Etowah and Athens.

So, too, was the Pacific theatre of World War II represented in the candidacy of George “Gump” Painter, a thirty-three-year-old who had fought for thirty months against the Japanese.  William “Bill” Hamby, twenty-nine, was the Non-Partisan ticket candidate for Circuit Court Clerk.  If not the most seasoned of the GI candidates, but certainly the oldest at fifty-two years of age was Charlie Pickle, who was running for Register of Deeds.  Pickle was a Republican, while Painter and Carmichael were Democrats.  Both parties were well represented on the Non-Partisan ticket.  It was a clever and winning strategy as McMinn County Republicans held their own convention and endorsed the GI slate of candidates for the general election against the Cantrell machine.

The infighting occurring in the Cantrell machine was an uprising spearheaded by veteran McMinn County politico John Rogers whose son, Clyde, had tried to move from the County Clerk’s office to win the nomination for sheriff.  Unfortunately for Clyde Rogers, his opponent was the boss himself, Paul Cantrell, who won the Democratic nomination.  The spilt was the first between the Cantrell machine in a decade.  The bitterness and hostility between Cantrell and the Rogers factions were far more intense than that between the machine and the insurgent GIs according to Willard Yarborough.

The bitterness was fueled by John Rogers having been arrested for carrying a pistol on his person and Willard Yarborough reported it was widely known the Cantrell machine deputies had treated Rogers “none too gently.”  Mrs. Bill Murphy was a daughter of John Rogers and sister of Clyde and she, too, was charged with profanity and deputies attempted to arrest her as well.  During an escalating argument, her husband was shot at his drug store by Bill Rucker, Chief of Police for Etowah.  At the time of the shooting, Bill Murphy was not attempting to fight anyone, but merely trying to prevent his wife from being arrested.

Knox Henry, the GI candidate for sheriff, promised to accept only the $5,000 annual salary paid to the McMinn County sheriff.  It was an ample salary for the time, the equivalent to roughly $74,000 in today’s dollars.  Because state law permitted the sheriff to keep the fees collected by his office, it was a highly lucrative office for both the top law enforcement officer and his deputies.  Knox Henry pledged to end the fee system and live off the sheriff’s salary.  The fees averaged around $25,000 and incumbent Sheriff Pat Mansfield had collected as much as $100,000 over a four-year period.  To give readers an idea of what an enormous sum that was in 1946, it was close to $1.5 million today.

Most of all, the GI candidates wanted to make certain elections were honest and fair.  “We want to assure any person that he can become a candidate for office in McMinn County with a chance to win,” one GI leader said.  “If democracy is good enough for the Japs, Nazis and Italians, then we figure it’s good enough for McMinn Countians.  We want a fair count at the ballot box and we expect to get it.”  In short, young Americans had traveled far from home, halfway around the globe to fight a bloody battle for freedom against totalitarian regimes which intended to enslave other peoples.  Those same young men did not propose to allow the Cantrell machine to politically enslave the people of McMinn County.

The Cantrell candidates did not campaign too hard, confident of their eventual election.  “Whatever happens I am always the target of the opposition,” Paul Cantrell said, appearing utterly unconcerned.  “They cuss me more than anybody else.  We hope there will be a quiet election and that everybody will keep his temper.”

The battle for political freedom ended with a bang rather than a whimper.  Paul Cantrell, Sheriff Mansfield and others had barricaded themselves inside the jail.  Veterans accumulated a variety of weapons and used dynamite to literally blow Cantrell and his followers out of the jail.  Cantrell fled, along with Sheriff Mansfield.  Just as Americans had secured their freedom from the British Empire and King George, so, too, had they freed themselves from the oppression of Paul Cantrell and his political machine.

The Americans who fought the Second World War have been labeled our country’s “Greatest Generation.”  For students of history who have delved into the fight for freedom during the Second World War, it is impossible to disagree.  That same generation changed the face of politics in Tennessee.