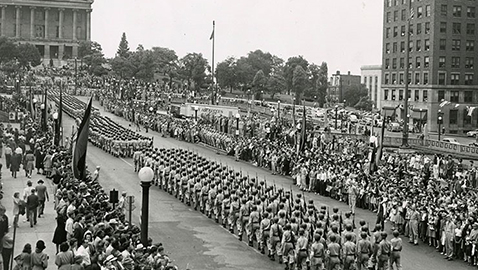 As 1945 came to a close, the Second World War had been won by the Allied nations. Adolf Hitler had shot himself in his underground bunker as the Red Army overran his capital of Berlin. Benito Mussolini, the Italian dictator, had been executed by his own people and strung up by his heels at a filling station, along with the bodies of his mistress and several compatriots where their corpses were abused by angry citizens. The Japanese Empire had crumbled with President Harry Truman’s decision to drop the atomic bomb on Nagasaki and Hiroshima. Japan’s Emperor, Hirohito, who was considered a living god by his subjects, ordered his government to sue for peace. Truman’s decision may have saved as many as one million American lives.

1945 saw the beginning of the Nuremberg trials, holding top Nazis accountable for their crimes against humanity. Tennesseans carried their part of the burden during the war, as well as the postwar world. Winfield B. Hale of Rogersville, Tennessee served for a year as a judge at the Nuremberg trials. While in Germany, Judge Hale was asked by a reporter what was uppermost in his mind. “Getting home,” Hale replied. “For living purposes, I wouldn’t swap one acre of Tennessee mountainside for the whole of Europe.” Judge Hale tried cases involving the German High Command. Today, the entire transcripts of those trials are in the University of Tennessee’s Special Collections.

Speaking to the Knoxville Exchange Club following the war, Judge Winfield Hale acknowledged, legally speaking, there is no such thing as a “crime against civilization by initiating and waging wars of aggression.” Hale told the Exchange Club members there were other charges which were entirely legal. “Crimes against enemy belligerents” as well as “mistreatment of enemy civilians,” Hale said, were legal charges.

Tennessee’s governor during the Second World War was Prentice Cooper. Having toured Europe in 1937, Governor Cooper believed if war broke out in Europe, it would be a matter of time before the United States became involved. Cooper began preparing as best he could and Tennessee was the first state in the country to have an Advisory Committee on Preparedness.

More than 300,000 Tennesseans served in the armed forces during the Second World War. Six of those were awarded our country’s highest military decoration for valor, the Congressional Medal of Honor. 5,731 Tennesseans were killed during the war, making the ultimate sacrifice for their state and country.

Likewise, although less well remembered, the Japanese would also be called to account for wartime atrocities. After the Japanese had surrendered, General Douglas MacArthur ordered the arrest of forty men accused of being war criminals. Included amongst that number was Hideki Tojo, who served as Prime Minister, Army Minister and the Chief of Staff for the Imperial Japanese Army. Holding all of those posts simultaneously, Tojo left himself hardly any wiggle-room after losing the war. General MacArthur and the Americans were also anxious to conveniently assess no part of Japan’s aggressive war in the Far East to Emperor Hirohito. Like many of his German counterparts, Hideki Tojo was hanged after being convicted of being a war criminal.

Another casualty of the Second World War was President Franklin D. Roosevelt, who had served only three months of a newly-won four-year term. President Roosevelt, gaunt, dark circles prominently displayed under his weary eyes, and appearing frail, had gamely campaigned for a fourth term in 1944. Roosevelt died of a cerebral hemorrhage on April 12, 1945 at his retreat in Warm Springs, Georgia. Roosevelt’s vice president, Harry S. Truman, became President of the United States.

The war cost immeasurably in both American blood and treasure. Some $350 billion had been spent to win the war, an astronomical sum then, but perhaps not so impressive in a time when our government spends trillions. One of the first effects to be felt when America entered the Second World War was the labor shortage, as young, able-bodied men were leaving to fight. Women replaced their husbands, fathers, and brothers in many industries and even a few of us still remember the image of “Rosie the Riveter” today. Women filled jobs as the United States dramatically increased its manufacturing and production. Women also faced the challenges, relatively new for most at the time, of working fulltime and trying to maintain their home lives. The number of students dropping out of high school increased with the beginning of the war, as youngsters were eager to fill waiting jobs; the number of teenagers working in the United States rose from a million to three million. Just as families had been transformed forever with the advent of the Great Depression, so too were they changed forever with the Second World War. Some children, born while their fathers were in the service, grew up never knowing their father. Many husbands, brothers, and sons came home broken, while others never came home at all. None came home the same as when they had left American shores.

The failure of many men to come home after the war and the change of women working saw women becoming the head of households and providing for the family.

One traditional role filled by women became an especially important calling during World War II. The demand for nurses was so great, it became a rather prestigious profession. A majority of nurses in the United States volunteered for the Army Nurse Corp and its sister, the Navy Nurse Corps, leaving a shortage of nurses in the country. Teenaged girls were anxious to enlist in the Cadet Nurse Corps. To make up for the shortage of nurses in America, thousands of retired nurses came back to work at local hospitals. Women also formed the Women Airforce Service Pilots (WASP) where female pilots flew airplanes from the factories where they were made to airfields in the eastern United States.

The birthrate in the United States had jumped in 1941 and dipped significantly from 1944-1945 when twelve million men were wearing their country’s uniform. After those men came home, the birthrate took flight and lasted until the late 1950s, which was America’s “baby boom.”

During the war, in spite of increased wages and more jobs available, poverty in America actually increased. Americans daily faced shortages of all kinds – – – there was a very serious shortage of housing, a lack of schools, nor were there enough hospitals and very few childcare facilities. The divorce rate rose and the war left five million “war widows.” Women comprised fully 36% of the workforce in America during the war and, with extended working hours, it exacerbated problems with children being left at home to fend for themselves.

The American government constantly reminded its people of the need to conserve and created the first recycling program with folks saving bottles, tin cans, all kinds of scrap metal, paper and animal fats used for cooking. There was rationing of food, meatless days, and powdered eggs and liquid paraffin instead of cooking oil. Gas was rationed and automobiles were no longer made as the former automotive manufacturers were producing tanks, airplanes, and jeeps instead. Rubber was a commodity used for the war and new tires were almost impossible to come by. “Victory Gardens” were encouraged for people to grow their own vegetables and 50% of America’s vegetables were grown in such gardens at one point during the Second World War. America’s economy was helped by the sale of war bonds and stamps; the comedy team of Bud Abbott and Lou Costello, at the height of their popularity, made a tour of the country and sold the equivalent of $1 billion in war bonds. Taxes also skyrocketed. Folks like Abbott & Costello were in the 95% tax bracket.

People began moving all over the country; one and a half million people relocated from rural areas to cities. Washington, D. C., before the war, had been described as a “sleepy little Southern town” but during the war became a bustling metropolis with a particularly severe shortage of housing for residents. Developments in the suburbs of Washington, D. C. began to boom. It was 1949 when America enjoyed a massive boom in housing that the availability of homes caught up with the demand.

One transformation that was especially profound for one region of the country during the Second World War was that in the South. Some wag once said the seniority system in Congress was the South’s revenge for the Civil War, as incumbents from the South, especially in the Senate, tended to remain in office for long periods of time, elevated by the seniority system into positions of influence and power. Southerners occupied more than their fair share of committee chairmanships in Congress and as a result, new industries flocked to the South because of its right-to-work laws as well as the government building new installations, military and otherwise. South Carolina’s Mendel Rivers (slogan: “Rivers Delivers”), over time, so loaded down his district with military installations and projects, it was said the area was at risk of sinking into the ocean. $9 billion dollars was pumped into the South for military installations and defense plants. Tennessee’s senior United States senator, Kenneth D. McKellar, was chairman of the relatively minor Post Office and Post Roads Committee, but he was also acting Chairman of the enormously powerful Senate Appropriations Committee, through which every federal dollar spent passed. It was Senator McKellar who was summoned by President Roosevelt to the White House. Once there, FDR asked the senator if it was possible for McKellar to “hide” $2 billion in the budget. Senator McKellar immediately replied, “Of course I can, Mr. President, but where in Tennessee are we going to hide it?” McKellar hid it in Oak Ridge, Tennessee. McKellar’s seniority and influence ensured Tennessee likely got more than her fair share of projects and federal dollars.

As per his usual habit, Senator McKellar did his best to “hide” as many federal projects in Tennessee as possible. In June of 1941, Middle Tennessee was selected as the site for war maneuvers for infantry and tanks. Supposedly, Middle Tennessee was chosen due to its similarity to the topography of Western Europe. It was there General George Patton refined his tactics, which made him one of the most famous American commanders during World War II.

Senator McKellar and his junior colleague, Senator Tom Stewart, pressed the War Department for installations. Camp Campbell was located in Clarksville and is known as Fort Campbell today; Camp Forrest was established near Tullahoma, Tennessee. Camp Tyson, named for the late general and U. S. senator Lawrence D. Tyson, was located in Paris, Tennessee. During the Second World War, those camps held thousands of enemy prisoners.

For most of the war, Cordell Hull was Secretary of State. A longtime congressman and U. S. senator from Tennessee, Hull had been meeting with Japanese diplomats when news arrived of the Japanese Empire’s attack on Pearl Harbor. After reading the note handed to him by the Japanese negotiators, Hull replied, “I must say in all my conversations with you during the last nine months I never uttered one word of untruth. That is borne out absolutely by the record. In all my 50 years of public service I have never seen a document that was more crowded with infamous falsehoods and distortions – – – on a scale so huge that I never imagined until today that any government on this planet was capable of uttering them.”

While the curmudgeonly Secretary of the Interior, Harold Ickes, described Hull as looking like an early Christian martyr, the Secretary of State possessed a vivid and colorful vocabulary of profanity, which he was fully capable of employing at a moment’s notice. Hull’s dressing down of Saburo Kurusu and Kichisaburo Nomura became legendary. Cordell Hull turned the air blue in his profanity-laced denunciation of the duplicitous Japanese.