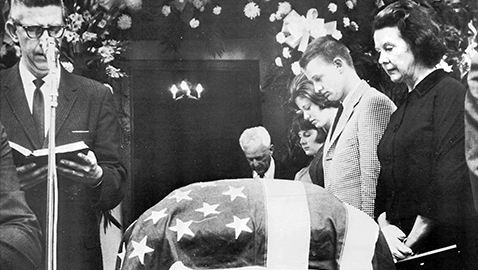 Lyndon Johnson once called Estes Kefauver, “The greatest campaigner of them all.” Kefauver was no silver-tongued orator; in fact, he was oftentimes tongue-tied and frequently mangled names and phrases. Yet Estes Kefauver likely had no peer as a retail politician in meeting folks one-on-one.

Estes Kefauver also generated strong feelings in the people he represented. I well recall my Baptist Democrat grandmother adored Kefauver while her husband, my grandfather, a Methodist and a Republican, loathed the senator.

Kefauver had served as Commissioner of Finance for the State of Tennessee briefly in the administration of Governor Prentice Cooper when he hurried home to run for Congress in a special election caused by the sudden death of Congressman Sam D. McReynolds in 1939. Estes Kefauver won the Democratic primary over a state senator and beat the GOP candidate in the general election. Kefauver was ambitious and had his eye on a seat in the United States Senate. Kefauver cast a longing eye in the direction of Senator Kenneth D. McKellar, Tennessee’s longest serving United States Senator. In 1946 the seventy-seven year-old McKellar had been ill and had served Tennessee for thirty-six years in the House and Senate. K. D. McKellar was a renowned political feudist and TVA Director David Lilienthal had earned the senator’s ire by not having consulted him about building a dam in Tennessee. As he always did, McKellar pursued his quarry relentlessly. Lilienthal would have made a formidable heroine inasmuch as he played the role of a virtuous and helpless victim to perfection. Congressman Kefauver announced he was thinking of running against McKellar in 1946. Much to his disappointment, Estes Kefauver quickly changed his mind, determining the old senator was too deeply entrenched in Tennessee to be beaten. Kefauver did support Edward “Ned” Carmack, who had quite nearly toppled Tennessee’s junior U. S. senator, Tom Stewart, in the 1942 Democratic primary. McKellar beat Carmack soundly without ever once returning home to campaign.

Kefauver ran for the Senate in 1948 against Senator Stewart and won the Democratic primary with the unintentional aid of E. H. Crump, leader of the Shelby County political machine. Crump was vehemently opposed to Kefauver’s candidacy, but he had informed Senator Stewart he would not have the Shelby County political machine’s support in 1948. Instead, the Memphis Boss declared his support for John A. Mitchell of Cookeville, an obscure Circuit Court judge Crump had never even met. Crump had been confident once told he did not have the support of Shelby County, Senator Stewart would not run again. Tom Stewart issued a fiery statement denouncing the Memphis Boss and insisted upon running anyway. It soon became clear Estes Kefauver might squeak through the primary with a plurality, which is exactly what happened.

Kefauver had steered clear of the candidacy of President Harry Truman in Tennessee, who was perceived to be a sure loser in the general election. Nor did Truman have the support of E. H. Crump, who announced he was backing “Dixiecrat” candidate Strom Thurmond. Senator McKellar stoutly endorsed Truman. Kefauver faced the first serious challenge by a Republican in a general election since McKellar had defeated former governor Ben W. Hooper in 1916. Former congressman Carroll Reece from upper East Tennessee ran as the GOP candidate for the U. S. Senate. Kefauver won easily.

Once inside the United States Senate, Estes Kefauver did not receive a warm welcome, unlike another newly elected senator, Lyndon B. Johnson of Texas. Kefauver’s reception by his senior colleague, Senator McKellar, was arctic. It was not long before the two Tennessean were fighting over appointments in the Volunteer State. Kefauver had apparently, in anticipation of Thomas E. Dewey defeating Harry Truman, endorsed a Republican for federal office in West Tennessee. McKellar gleefully pointed out Kefauver’s endorsement to the White House. Estes Kefauver began complaining every patronage dispute save one had been decided in McKellar’s favor. That one instance involved the U. S. Marshal for the Middle Tennessee district. Reed Sharp had made the mistake of not supporting Harry Truman and the President refused to reappoint him. The Kefauver – McKellar relationship was never warm while they served together in the Senate; in fact, during one exchange between them on the floor, Senator William “Wild Bill” Langer of North Dakota jumped up and playfully asked which of them represented the Hatfields and which represented the McCoys.

Once in the midst of yet another dispute, McKellar wrote his junior colleague a multi-page letter noting Kefauver’s idea of “cooperation” seemed to be doing all the operating while “leaving the ‘co’ to me.”

McKellar was determined to run for a then-unprecedented seventh term in 1952, but lost the Democratic nomination to Congressman Albert Gore. Kefauver and Gore were much more congenial colleagues. Still, neither man was part of the “inner club” that ran the United States Senate. Kefauver’s crime investigation, the first such investigation to capture the popular imagination of the public as it was broadcast on the relatively new medium of television, had helped to bring about the defeat of Senate Majority Leader Scott Lucas of Illinois. Kefauver and his committee had revealed some quite embarrassing facts about the Democratic nominee for Sheriff of Cook County (Chicago), causing the news media to label him “the world’s richest cop.” Daniel “Tubbo” Gilbert cheerfully admitted he had been remarkably lucky in gambling, which explained his earnings.

Estes Kefauver was also more liberal than many of his contemporaries, especially in Tennessee. Kefauver had fierce opposition in the form of Congressman Pat Sutton, who challenged the senator in the 1954 Democratic primary. Sutton continuously battered Kefauver’s record and attracted attention for his use of a helicopter, then a novelty, during the campaign. Sutton was well-financed, but Kefauver’s victory was overwhelming. Senator Kefauver was renominated with better than 68% of the vote. Pat Sutton was humiliated by the scope of his defeat; the congressman carried his home county of Lawrence and three other small counties in West Tennessee. Kefauver carried everything else. Kefauver’s margins in Tennessee’s four big urban counties were astonishing; the senator won Knox County with better than 75% of the vote; Kefauver won Davidson County with 72% and almost 73% in his home county of Hamilton. Even in the ailing Boss Crump’s domain (Crump would die in little more than a month following the primary election), Senator Kefauver won quite nearly 66% of the ballots cast.

Estes Kefauver campaigned tirelessly throughout the general election, but Dwight Eisenhower proved to be a popular incumbent. The Stevenson – Kefauver ticket lost and the senator was embarrassed to see Eisenhower carry Tennessee once again.

Perhaps the most vitriolic campaign Estes Kefauver ever faced was his reelection effort in 1960. Kefauver faced a backlash from white supremacists as well as those citizens who just found the senator too liberal for their own tastes. Andrew “Tip” Taylor was well known, especially in his native West Tennessee, and had quite nearly upset Buford Ellington for the gubernatorial nomination two years earlier. Taylor ran yet another fierce campaign against Senator Kefauver. Once again, Kefauver won an astonishing victory, polling almost 65% of the vote. Senator Kefauver won almost 80% of the vote in Knox County.

That same year, Richard Nixon carried Tennessee over John F. Kennedy by a greater margin than that won by Dwight Eisenhower in 1952 and 1956.

In August of 1963, Estes Kefauver was as busy as ever. Chairman of the Senate’s Anti-Trust & Monopoly subcommittee of the Judiciary Committee, the senator announced the first week of August there would be an investigation of a corporation owned by boxer Sonny Liston. Senator Kefauver told reporters he would also press for passage of his bill giving the U.S. Justice Department regulatory powers over “interstate professional boxing.” Senator Kefauver was also deeply involved in a legislative spat with drug manufacturers (the legal kind), which involved yet another investigation as to whether interests in the U.S. were attempting to put McKesson & Robbins, then the biggest drug wholesaler in the world, out of business. Local press reports at the time stated McKesson & Robbins sold prescription drugs at “rock-bottom prices in Colombia in co-operation with the Colombian government.”

Columnist Norman Bradley reminded his readers in August it had been Senator Estes Kefauver who had initially insisted a “nationwide crime syndicate does exist” in the United States. At the time, the FBI didn’t acknowledge there was such a thing as the Mafia.

Ellis Binkley, the political columnist for the Kingsport Times related a story told to him by Senator Albert Gore, who recalled a man who telephoned him at home at 2 a.m. The man, whom Gore knew only slightly, was from Memphis and asked the senator to take care of the “white folks” in Tennessee. Gore replied he tried to take care of all his constituents, causing his caller to say, “I don’t want to eat with ‘em, sleep with ‘em, go to school with ‘em, or go to church with ‘em.” Senator Gore drily wondered if the fellow wanted to go to Heaven with them. That retort drew a long pause and finally the caller sighed and said, “No, I guess I will go to hell with you and Kefauver.” Gore said he recalled the telephone call in the Senate cloakroom but noted his senior colleague was not pleased. “I don’t think Estes appreciated it one bit,” Gore told a group at the Democratic Women’s picnic.

On August 10 the Nashville Banner ran a bold headline announcing the death of Estes Kefauver. The late senator’s administrative assistant, Charles Caldwell, announced Kefauver had died at 1:40 a.m. from a “rupture in the main blood vessel of the heart.” Senator Kefauver had left the Senate floor complaining of chest pains, yet the Tennessean thought he had a bad case of indigestion. Eventually he went to be checked out at the Bethesda Naval Hospital where doctors determined he had suffered a mild heart attack and needed surgery. Years of heavy smoking and drinking had taken their toll on the senator. Physicians were firm in stating the senator would require complete rest for at least three weeks. During the night, Kefauver suffered a “dissecting aneurism of the wall of the ascending aorta.” That required immediate surgery to repair the inner wall of the senator’s aorta.

Kefauver put off the surgery until his wife Nancy could be present. Mrs. Kefauver was out of town and flying back hurriedly. As her plane landed in Washington, D.C., Estes Kefauver’s aorta burst and he died. Caldwell was at Kefauver’s bedside when the senator died. Estes Kefauver slipped away “quickly and peacefully.”

Tributes began pouring in from Kefauver’s friends and colleagues. Former governor Gordon Browning, who had been Kefauver’s running mate in the 1948 campaign said, “I am extremely shocked and deeply grieved . . . his life was a crusade for better government and a high standard of living for all Americans.” George R. Dempster, former mayor of Knoxville, when queried by a reporter following Senator Kefauver’s passing, replied, “I have been here 76 years and I consider him to be the greatest senator Tennessee ever had. The state owes him as much on TVA as to any other man living . . . I’ve been after him for several years to slow down but he just kept going like a house afire.”

The funeral of Estes Kefauver remains one of the largest public funerals in the history of Tennessee. My grandmother was a native of Madisonville, Tennessee and she went to say goodbye to her friend Estes. For many Tennesseans of a certain age, they retain distinct memories of the man who was the greatest campaigner of them all.