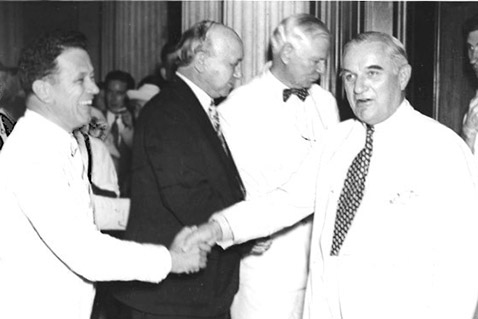 Political bosses are found in every shape and form, but perhaps no state in the union has been more accustomed to bosses than Pennsylvania.

Joseph Finch Guffey was born in Guffey’s Station on December 29, 1870. Guffey’s father was a staunch Democrat in what was then a bastion of Republicanism. In fact, the Republicans were ruled by a series of political bosses beginning with Simon Cameron, who served in the United States Senate and was a member of Abraham Lincoln’s Cabinet. Cameron’s son Don succeeded in his father’s political empire. Matthew Quay, also a U.S. senator, was the GOP boss of Pennsylvania and was succeeded by Boies Penrose, yet again a member of the United States Senate. There was a potent political machine in Philadelphia which delivered regular majorities on behalf of GOP candidates. The Philadelphia machine was ruled by longtime congressman William Vare, who won a seat in the U.S. Senate but was not allowed to be seated by the senators who voted to eject him for the massive sums spent to elect him.

To measure precisely how Republican a state Pennsylvania was at the time, the Keystone state was one of seven that backed incumbent President Herbert Hoover over Franklin Roosevelt in 1932 during the grip of the Great Depression. While winning less than 40% of the popular vote in 1932, Herbert Hoover won just over 50% of the ballots in Pennsylvania while FDR won 45%.

Joseph F. Guffey was swimming against the tide in Pennsylvania as a Democrat. Guffey had attended Princeton University where he came to know Woodrow Wilson, then a professor. Guffey kept in touch with and was strongly supportive of Wilson’s presidential candidacy for the Democratic nomination in 1912. Guffey’s relationship with his uncle, who was a party chieftain, was severely damaged over their divergent views on the presidential nomination. The younger Guffey managed to sway enough voters to eke out more votes in the Pennsylvania delegation to the Democratic National Convention than his uncle who was backing Speaker of the House Champ Clark of Missouri.

During President Wilson’s administration, Guffey was appointed to serve as the Director of the Bureau of Sales in the Office of the Alien Property Custodian. Joe Guffey received exactly one dollar per year as his compensation, yet he handled enormous sums of money.

The day before his birthday in 1922, Joseph F. Guffey was indicted on twelve counts, which included charges of misappropriation of funds and embezzlement. Guffey later published a memoir and maintained at the time and for the rest of his life, the charges were politically motivated. Certainly, the administrations had changed from Democratic to Republican. The charges were later dropped.

Joe Guffey had owned a company, along with a partner, that was initially quite successful in oil speculation. Eventually, the company was successful enough to provide Guffey and several of his sisters with a comfortable annual income.

Guffey had diligently worked hard on behalf of the Democratic Party in the Keystone State and encouraged by the showing made by Franklin Roosevelt, became a candidate for the United States Senate in 1934. Abrupt of speech and manner, well-tailored like a Wall Street lawyer, Joseph Guffey was left of center. Guffey was close to John L. Lewis, the colorful and eloquent head of the United Mine Workers’ Union. Joe Guffey was an unabashed supporter of organized labor.

The incumbent U.S. senator from Pennsylvania was David A. Reed, a wealthy lawyer who had served in the United States Senate since he had first been appointed to the seat in 1922. Reed, a conservative, was weakened in the primary by a challenge from the governor, Gifford Pinchot.

Joseph F. Guffey won the general election with just over 50% of the vote, beating Senator Reed by more than 127,000 votes. Guffey became the first Democrat to win election to the United States Senate from Pennsylvania since William A. Wallace in 1874. Guffey was the first Democrat to be elected by popular vote to the U.S. Senate, as Wallace had been elected by the Pennsylvania General Assembly.

Once in the Senate, Guffey told anyone who would listen he was “a 100 per cent Roosevelt man.”

The 1938 election had been a great success for Pennsylvania Democrats as they had not only elected Joseph F. Guffey to the Senate but also managed to win the governorship for George H. Earle. Earle was one of just two Democrats elected to serve as governor of Pennsylvania between the Civil War and World War II. Earle had been Roosevelt’s ambassador to Austria prior to his election as governor, where he warned the administration about Hitler and Nazi Germany.

Senator Joe Guffey, along with Governor George Earle, was an ardent supporter of President Franklin D. Roosevelt and the New Deal. Some of Guffey’s colleagues in the Senate thought the Pennsylvanian was little more than a mindless rubber stamp for the Roosevelt administration. With the numerous alphabet agencies of the New Deal and the tens of millions of federal dollars pouring into the Keystone State, Senator Joseph F. Guffey became the Democratic boss of Pennsylvania.

Prior to the election of 1932, many Black Americans retained their voting loyalty to the party of Lincoln and voted Republican. Joseph F. Guffey helped to cobble together a coalition that relied heavily upon Blacks and organized labor for majorities. That same coalition proved to be highly effective in the 1936 elections when Roosevelt carried Pennsylvania and the Democrats won both chambers of the General Assembly, which allowed Governor Earle to enact his “Little New Deal” in the Keystone State.

One of Senator Guffey’s first actions as a member of the United States Senate was his criticism of Harry Anslinger, whose wife happened to be the niece of one of the most powerful Republicans in Pennsylvania and the country, Andrew Mellon. Mellon was also one of the richest men in the country and had served as Secretary of the Treasury throughout the administrations of three GOP presidents: Warren G. Harding, Calvin Coolidge and Herbert Hoover. Harry Anslinger had been an assistant commissioner in the Treasury Department’s Bureau of Prohibition; later, he became the first Commissioner of the newly formed Bureau of Narcotics, a post he held for thirty-two years. Anslinger was notorious for a furious campaign that targeted jazz musicians and especially famed singer Billie Holiday. Harry Anslinger was also a racist, a fact which Senator Joe Guffey widely denounced.

There were hard feelings following the 1938 election, especially on the part of the powerful Mayor of Pittsburgh, David Lawrence, who recruited a former Republican to challenge Guffey in the 1940 Democratic primary. An original booster for FDR to run for an unprecedented third term, Guffey easily dispatched his primary opponent and he and Lawrence mended their differences. Senator Guffey won another six-year term as Franklin Roosevelt carried Pennsylvania once again in 1940.

Guffey’s most notable achievement was likely his sponsorship of the Guffey Coal Act, which was struck down by the U. S. Supreme Court. The senator redrafted the bill right away, which was promptly passed after providing the necessary remedies to pass Constitutional muster.

By 1943, Guffey had won a place on the prestigious Senate Foreign Affairs Committee. Isaiah Berlin, a British scholar, was providing the British Foreign Office with information about American politicians and some of his word portraits were highly incisive. Berlin wrote that Guffey was “a noisy administration supporter who wraps himself in the Roosevelt flag and has been advocating for a fourth term for some time.” Berlin told the British Foreign Office that Senator Guffey was, “A typical Pennsylvania politician who has decided to throw his lot in with the President and has become an obedient party hack not of the purest integrity.” Isaiah Berlin added Guffey, “Consistently votes in the opposite direction to his fellow Senator from Pennsylvania, James Davis.”

While Isaiah Berlin was hardly the only person in Washington, D.C. who thought Joe Guffey’s devotion to FDR and the New Deal bordered on the slavish, there is little reason to suspect the Pennsylvania senator was not a true believer in the Roosevelt program. Joe Guffey never pretended to be anything other than a 100% backer of Franklin Roosevelt and the New Deal.

At age seventy-six, Joe Guffey showed no inclination to retire. The senator sought a third term but drew a formidable opponent in Governor Edward Martin, one of the most popular politicians in the Keystone State.

Franklin Roosevelt was dead and the Second World War had been won. Times had changed and 1946 was the best election year for Republicans since 1920 when Warren Harding had won in a landslide. While there was no presidential election in 1946, Republicans won both houses of Congress. Joe Guffey doggedly campaigned upon his record as a liberal and supporter of presidents Roosevelt and Harry Truman. Guffey was buried in the GOP tidal wave and Governor Martin won by more than 600,000 votes, garnering 60% of the ballots cast.

Following his loss, Joe Guffey did not return home to Pennsylvania, but rather retired to his large home in Washington, D.C., an imposing brick structure with almost 7,000 square feet of space and nine bedrooms. Guffey lived with one or more of his sisters at various times. The former senator did return to Pennsylvania and seemed to enjoy his status as one of the Democratic Party’s elder statesmen.

Senator Guffey attended numerous functions for Pennsylvania’s Democratic Party. In 1951, the eighty-one-year-old former senator and his sister, Ida, traveled through several towns in the Keystone State on their way to Pittsburgh. The former senator employed a chauffeur to drive and he and Ida had taken the precaution of bringing along a private nurse to look after him.

That same year Joe Guffey called at the White House to visit with President Truman. The two had served in the U.S. Senate together; indeed, they had both been elected in 1934 and were seatmates on the floor. As always, inquisitive newspaper reporters awaited anyone who called upon the president and greeted those coming out of the Oval Office with a barrage of questions. As Joe Guffey left the White House, he was tight-lipped. All the former senator would say was that his visit had been “entirely personal” in nature.

Joseph F. Guffey lived to see another Democrat elected to the governorship when George Leader won the 1954 election. So, too, did Guffey live to see Democrat Joe Clark eked out the narrowest of victories in upsetting Senator James H. Duff in 1956. By 1958, the United Press International reported the former Pennsylvania senator was “living a quiet life in Washington, D.C.” It became quieter still and he passed away the following year at age eighty-eight.

An editorial in the Wilkes-Barre Times Leader remembered Joe Guffey as a “shrewd politician whose smooth appearance and background of wealth and education contradicted his political activities and philosophy.”

The Scranton Times-Tribune recalled Senator Guffey as having “made his political and legislative influence felt and he was able to get things done.” “He was not a Senate spellbinder and never professed to be a statesman,” the editorial stated. “But he was not afraid to take a stand and declare his position openly on any important issue.”

“Former Senator Guffey had the reputation of standing by his friends. While in the Senate he worked tirelessly to promote Pennsylvania’s interests,” the Times-Tribune editorial reminded its readers. Because Joe Guffey stood by his friends, his friends noted his passing with sadness.

Very frankly, being known for standing by one’s friends and tirelessly promoting the interests of the home folks is a pretty fine legacy for any person to leave behind.