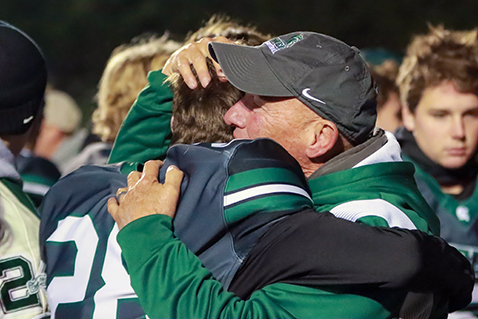 The End of an Era

It was a disappointing end to a storied career.

Friday night at David Meske Stadium, Webb School of Knoxville’s perfect season came to an abrupt end with a 44-7 loss to Lipscomb Academy in the semifinal round of the TSSAA Division II-AA State Playoffs.

Unsurprisingly, emotions ran high after the game. Hugs and tears were in abundance.

“I love you guys,” Meske told his team in the post-game huddle. “This is the last football game I’ll ever coach. And I’m proud it was with you. We’re out there to win but there’s gonna be more important things that you do.”

For a quarter and a half, it was a tight game, and Meske’s boys had reason to believe they could give their coach a shot at an eighth state championship

The Mustangs took the opening kick and drove 80 yards for a 7-0 lead when workhorse running back Drew Patterson took it in from the 14.

Lipscomb then forced a Spartan punt and took the ball back with 4:55 left in the first. But on first down, quarterback Hank Brown threw a lateral pass that was incomplete, and was therefore a fumble.

Webb’s Steven Beaty recovered and the Spartans were in business on Lipscomb’s 36. It took them 11 plays, but they tied it at 7 when quarterback Charlie Robinson went around the left end for the touchdown on fourth and one seconds into the second quarter.

It would be the last offensive highlight for the boys in green, as Lipscomb’s defense continually pressured Robinson, both on keepers and pass attempts.

A 48-yard kickoff return put the Mustangs on Webb’s 26 to start the next possession, and they needed but five plays to take a 13-7 lead. The score came when Brown hit Mark Johnson for a 13-yard touchdown.

“For sure, they’re a good team,” said Robinson. “That’s what’s hardest about this game, just wish we could have brought coach a state championship.”

“They’re a really good football team but we did some good things,” said Meske. “We had chances in the first half but things didn’t go our way. But I knew we were gonna play hard. We just didn’t make enough plays early in the game.”

Lipscomb built the lead to 20-7 with 4:26 left in the half when Maureice Sherrill scored on a 12-yard run. Webb badly needed a score before half to hang in.

It didn’t happen. Taking over on their own 21 with 4:19 left, the Spartans moved to the ‘Stangs’ 22 with one second left. Robinson’s pass was intercepted in the end zone, and Webb went into half down 13.

For the game, Robinson was 15 of 31 for 73 yards and an interception, far below his season’s averages.

“Late in the half,” said Meske … “all of a sudden it’s 20-14 (if Webb had scored) and you’re in a position to take the lead (with the second half kickoff) but it didn’t work out at the end of first half.”

A score to open the second half might also have kept Webb in the game, but Robinson’s fourth-down pass from Lipscomb’s 39 with 8:33 left in the third was incomplete. The Mustangs pulled away after that.

After the game, Meske reflected on both the season and his nearly four decades at the helm of Spartan football.

“It’s been a great year,” he said, not trying to hide his emotions. “I love these kids. I’ve been fortunate to coach football for a long time. I’ll miss them. I couldn’t have asked for a better group of young men to be around.”

Meske stressed that winning, while important, was always secondary to being a good person and trying to make a difference.

“Winning is important, but it’s not good enough,” Meske said. “It’s got to be more than that. Changing this world makes you successful.”