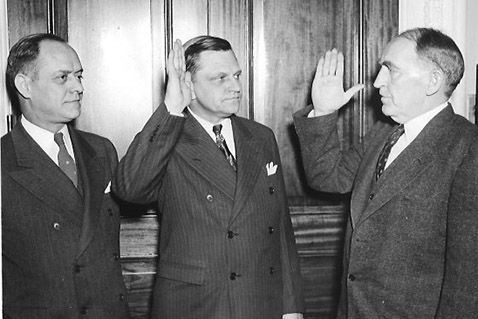 Clifford Davis had served as the congressman from the congressional district which was comprised of Shelby County.  Davis had long been an institution in Shelby County and his name had first been on the ballot in 1923.  Cliff Davis had long been one of the most popular local officials, which is precisely why E. H. Crump, master of the Memphis machine, had personally selected him to go to Congress in a 1940 special election.  That election had been necessary because Crump had chosen Congressman Walter Chandler to come home and serve as mayor of Memphis.

Chandler, then practicing law, was one of Congressman Davis’s more prominent supporters as he faced two opponents inside the Democratic primary.  There were obvious signs of wear surrounding Cliff Davis and his service in the House of Representatives.  The political erosion, as it always does, happened over a period of years.  In 1960, Congressman Clifford Davis had won the Democratic primary with better than 83% of the vote.  The only other serious challenge Davis had faced was in the 1950 Democratic primary.  Opponents of Crump had felt emboldened when Estes Kefauver and Gordon Browning had run relatively well inside Shelby County.  Those same opponents of the Memphis Boss pushed John B. McKinney to run against Congressman Davis.  Davis won easily with two-thirds of the ballots cast.

Davis had drawn two challengers in the primary in 1962 and while he won rather easily, the combined vote of his opponents represented a majority of the votes cast.  Cliff Davis had won with just a hair under 50%.  Worse still, Davis quite nearly lost the general election to Republican candidate Bob James.  Out of just over 110,000 ballots, Davis won by 1,213 votes.  It surprised nobody that Bob James was running again in 1964.

There was no one reason why some voters had grown tired of Cliff Davis, who was a personable man.  Even Crump had reportedly decided to replace Davis in 1954, but fate had determined otherwise.  Cliff Davis’ congressional career was likely saved by Puerto Rican nationalists shooting at congressmen from the House galleries as they represented helpless targets on the floor below.  Davis was one of five congressmen hit by a bullet.  While not seriously injured, Davis required treatment and was carted away in an ambulance to the hospital.  The resulting wave of sympathy for the congressman caused Crump to think twice about an attempt to replace Davis with another candidate.

Like many others, E. H. Crump had surely heard the rumors about Cliff Davis’ drinking, which made him a less effective congressman.  Crump might have gone through with replacing Cliff Davis had he lived longer.  As it was, the Memphis Boss was aging and ailing.  Crump died in October of 1954.

With the death of Edward Hull Crump, the machine he had so meticulously built over time began to fall apart.  Crump’s shoes as the master of the machine were impossible to fill and little by little, those officeholders most closely associated with the old Crump organization either died, retired or were displaced by the voters.  Cliff Davis was the last congressman personally selected by the Memphis Boss, and to many voters that association with Crump made Davis a symbol of the past many wished to see gone. Others felt Davis was too conservative and thought Memphis and Shelby County should be represented by a more progressive Democrat.  That was certainly the thesis of George Grider, a squire serving on the Shelby County Quarterly Court (the forerunner of the county commission), who was widely considered to be a more liberal Democrat.  The other challenger to Cliff Davis inside the Democratic primary was state Senator Frank White, who described himself as a conservative.

In 1962, both of the challengers running against Cliff Davis in the primary had been liberals, which gave the congressman all of the conservative votes.  Many Davis supporters were worried that Frank White’s candidacy would siphon off votes from the congressman and provide a  window of opportunity for George Grider.

Former Congressman Walter Chandler was pressing the matter of redistricting through the court system.  Cliff Davis represented a congressional district with well over 600,000 residents, while Tom Murry and Robert A. “Fats” Everett, who represented the Seventh and Eighth Congressional districts respectively, had just over 200,000 residents in their largely rural districts.  Tennessee’s state legislature had for years denied greater representation to the more urban communities of the Volunteer State.  Congressman Cliff Davis was a practical enough man to realize times were changing.  In a television interview, Davis told a reporter, “I am sure the next Tennessee legislature will reapportion congressional districts.  If it doesn’t, I’m sure Walter Chandler and his associates will take the matter to the courts and do it there.”

One of the biggest social events – – – and many social events are also political events as well – – – was the Cotton Carnival in Memphis.  The Cotton “King and Queen,” along with their “Royal court,” rode on a brightly lit barge along the Mississippi River to land on the shore of the Bluff City as a brilliant display of fireworks lit up the night sky.  On hand to greet the Cotton King and Queen were Congressman Cliff Davis and Governor Frank Clement.

Another benefit of incumbency is one’s access to other leaders.  Congressman Cliff Davis called at the White House and released information about his visit with President Lyndon Johnson.  “We talked about everything from Cal Alley’s cartoons (the cartoonist for the Memphis Commercial Appeal) to the management of the Appalachia bill, in which the president is so interested,” Davis told a reporter.  When asked if LBJ had discussed any “personal politics” with the congressman, Davis replied, “No.  No Democratic president can take any part in a primary.  As the party leader, he, of course, can hope for the election of Democrats in the general election who have been nominated in the primary.”

One of the luxuries enjoyed by an incumbent is delaying an official announcement of candidacy.  Much of what an effective congressman does daily, especially when back home in the district, can be considered informal campaigning.  Cliff Davis finally announced what almost everyone had considered inevitable; the congressman said he was running yet again.  The site of the congressman’s announcement was the Balinese Room of the Claridge Hotel in downtown Memphis.  A Dixieland Band played the “Judge Cliff Davis Blues” as the congressman mounted the platform before a crowd estimated to be some 500 people at precisely the designated time of 4:00 p.m.

“Some people have been saying I am physically incapacitated,” Davis told the audience.  “I am proud to say this is not true.”  To illustrate the fact he was still vigorous and able to do his job, Davis detailed his schedule for the Thursday he flew back to Memphis that week.  Cliff Davis said he arrived in his House office at 8:00 a.m. and prepared for a committee hearing on the Appalachia bill being pushed by President Johnson.  Davis said the committee hearing “started on the dot at 10” and then he was off to the White House for a meeting that lasted an hour.  The rest of the afternoon had been spent in meetings before he and his wife flew in a private plane back home to Memphis at 5:00 p.m.  Even that flight was one where he conducted business, Congressman Davis explained.  According to Davis, during the flight, he had visited with executives from Sears, Roebuck and Company about their industrial plants in the Southland.  “This is to give you an idea if I can keep the pace,” Davis told his supporters.

As to what he had accomplished in the twenty-four years he had represented Shelby County in the U. S. House of Representatives, Davis pointed to the new Kennedy Veterans’ Hospital which was to be built in a local urban renewal area, as well as to the industrialization of President’s Island, and several other items of interest to residents of Tennessee’s Ninth Congressional District.

Carrie Davis was standing beside her husband as the congressman spoke and he referred to his wife as “the most influential woman in Washington.”  Davis made his reelection announcement on the day of their 42nd wedding anniversary.

State Senator Frank White, in pressing his claim to the Democratic nomination, had said the incumbent should state his qualifications to sit in the House of Representatives along with his platform.  Davis icily replied, “I think my qualifications for Congress during the 24 years of service are well known and understood by the people of the Ninth Congressional District.”

“They will be restated and reemphasized between now and the primary,” Congressman Davis added.  “Let me respectfully suggest that you make known your own qualifications and your position on matters affecting our district, our part of the country and the nation in your own way.

“I shall manage my campaign as I have in my other races in my way,” Davis snapped.

White, almost thirty years younger than Congressman Davis, wondered aloud whether the voters really wanted “a candidate who is out of step with the feelings and needs of the community and should retire” or if they preferred a “younger candidate who is able to be on the job and will fight of all the people’s interests here.”

Congressman Cliff Davis was conspicuously on the job in Washington, D.C., when Knoxville Mayor John J. Duncan appeared to testify before the House Public Works Committee on the Appalachian Regional Development Act.  Duncan was photographed with Congressman Davis, which may have given both of them a boost as the Knoxville mayor was engaged in his own hotly contested race with Judge Frank Qualls for the GOP nomination for Congress from Tennessee’s Second Congressional District.

Cliff Davis was, not surprisingly, lambasted by both George Grider and Frank White for having voted for a bill that raised the salaries of congressmen.  Grider said if he were elected to the House of Representatives, he would use the pay increase to create a scholarship fund.  Frank White used the bill as an excuse to pen a letter to Congressman Davis, which he promptly released to the news media.  “Most of our people here cannot even stretch their dollars far enough to have a decent living and pay the high cost of government taxes,” White fumed.  “Your selfish vote has burdened them with more taxes . . . and you cannot justify your actions.”  The salary raise was $7,500 annually; in today’s dollars, once accounting for inflation, it was roughly $70,000, which was a hefty pay raise.

“The only conceivable reason I can ascribe to Mr. Davis’ action,” George Grider huffed, “is the effort to please some of his congressional cronies who may be expected to help him in his desperate bid for renomination.  I predict that before this summer is over we will see them swarming down here in their own private gravy train to urge Memphians to vote for Cliff Davis.”

With the summer rapidly approaching, both the temperatures and tempers would continue to rise accordingly.