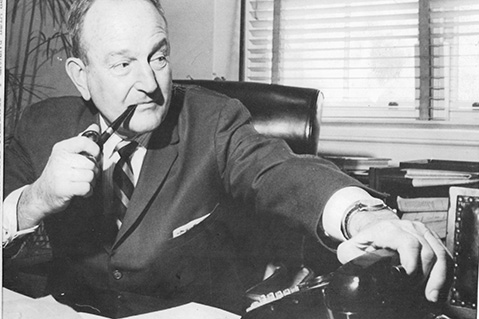 Cliff Davis was sixty-six years old as he faced voters in the Democratic primary in August of 1964. For forty years, Cliff Davis had been a political favorite of the people of Shelby County, but his popularity was slipping. One of the last vestiges of the old political machine of the late E. H. Crump, Clifford Davis had been the handpicked candidate of the Memphis Boss in a 1940 special election to the U.S. House of Representatives. Crump had summoned the sitting congressman, Walter Chandler, to come home to serve as mayor of Memphis. Chandler had enjoyed serving in Congress, but dutifully obeyed the order and was considered one of the best mayors in the history of Memphis. Davis, a big vote-getter locally, had gone off to Congress where he had remained for the next twenty-four years.

It is as rare as hen’s teeth for any congressman to occupy a seat in the House of Representatives without complaints by some, no matter how effective he/she might be. Cliff Davis was no exception to that rule and some were dismayed despite his longevity and seniority, he wielded little real influence in Congress. There were whispers about his drinking, which did nothing to increase his effectiveness as a congressman.

Evidently, Crump had decided to replace Davis in Congress but fate had favored the congressman, albeit it in an odd way. Davis was one of several congressmen wounded when Puerto Rican nationalists fired upon the unsuspecting House members from the galleries. Shot in the leg, Davis had been the beneficiary of a wave of sympathy that caused Crump to rethink his decision to replace the congressman. Later that year, death claimed the Memphis Boss, which also had the effect of prolonging Davis’ time in Congress.

Davis had faced two opponents inside the Democratic primary in the 1962 election and he won easily, but there were signs of significant wear. While Davis beat his opponents inside the primary, he did not win a majority of the votes cast, polling 49.52% of the ballots. More shocking still was his near loss in the 1962 general election. He barely eked past GOP candidate Bob James by 1,200 votes. Once an incumbent has quite nearly lost, he/she becomes a target for opponents. Once again, Cliff Davis had drawn two respectable opponents inside the Democratic primary. Both Frank L. White and George W. Grider were attorneys and local officeholders. White was forty years old and highly ambitious, having jumped from the Tennessee House of Representatives to the state Senate in two years’ time. Grider had retired from the Navy where he had commanded a submarine and boasted a proud record during the Second World War. The author of a book about his time as a Navy commander, “War Fish,” the pipe-smoking Grider was a crusading member of the Shelby County Quarterly Court, the forerunner of the local county commission. Grider’s submarine sank more Japanese tonnage than any other in the Second World War.

Like Grider, Frank White was also a veteran of the Second World War and had flown 40 missions over Japan. As a sidelight, Frank White had been the winner of the Memphis Press Scimitar’s spelling bee and had gone to Washington, D.C. to contend for the national championship. There Frank White had to content himself with being the boy’s champ, as three girls finished ahead of him.

With just over a week left until the primary election, Cliff Davis was maintaining a brisk pace to demonstrate he was still vigorous at an age when most men had retired. The Memphis Commercial Appeal was backing Congressman Cliff Davis for reelection to the House and reminded its readers of his seniority in an institution that prized longevity. The Commercial Appeal pointed out that only 18 members of the House had served longer than had Cliff Davis. “One of the reasons seniority has such a high value in Washington is that it is earned by men who are most completely in tune with people of their districts, and with their needs,” the editorial noted. The newspaper thought even “in these unsettled times,” Cliff Davis enjoyed an advantage in being renominated and returned to Washington.

Joseph Hanover, a former legislator and one of those most responsible for making Tennessee the pivotal state to ratify the Constitutional amendment giving women the right to vote, was then serving as a member of the Shelby County Port Commission. At the ceremony dedicating the opening of the pumping station, a $50 million project, Hanover praised Congressman Cliff Davis. “Without him, I doubt if we would have gotten the project completed,” Hanover told the gathering.

Speaking before a luncheon meeting of the Junior Chamber of Commerce at the Chisca Hotel, the congressman won a standing ovation from his audience. Davis had related his five-year effort to pass the Tennessee Valley Authority refinancing bill. The end result, Davis said, would save the people of Memphis $10 million annually and $300 million over a period of thirty years. As his opponents had accused Davis of absenteeism, the congressman snapped, “I have voted on every piece of major legislation presented to Congress of interest to this district and to the nation.” Davis was clearly irritated by Squire George Grider’s claim the congressman had exaggerated his own role in the passage of the TVA refinancing bill. The congressman ticked off a list of things he had helped to bring to Memphis and Shelby County; the “Memphis General Depot (now Defense Depot Memphis), Kennedy General (Veterans) Hospital and Memphis Naval Air Station at Millington,” as well as the Memphis Harbor Development Project. “Here’s a man lying about me . . .” Davis bitterly complained, “that I am not responsible for this.”

Grider, attending a “back-yard rally” at the home of City Commissioner and Mrs. Hunter Lane Jr., said, “I do not mind having Davis call me a liar one bit. They called me a liar at Stewartville and now they are forced to eat their words and give the voters a fair shake.

“They called me a liar about the Penal Farm charges and they had to eat those words. Every time they got caught in the glare of public attention.”

Frank White spoke on television and said he hoped to prove both of the daily newspapers in Memphis, the Commercial Appeal and the Press Scimitar, wrong by winning the Democratic nomination for Congress. The Commercial Appeal had endorsed Congressman Davis while the Press Scimitar had endorsed George W. Grider. If Cliff Davis was viewed by many as a more conservative Democrat, so too was Frank White. The state senator said he was a “conservative Democrat who is opposed to deficit spending.” That alone put Frank White at odds with the administration of President Lyndon Johnson.

Still, neither Cliff Davis nor Frank White was anywhere near as conservative as Republican Bob James, who faced an opponent in his own primary. James, speaking before the East Memphis Kiwanis Club, which met at the Colonial Country Club, declared the central issue in the congressional campaign was “the inherent conflict between freedom of the individual and the limitation government imposes that freedom.” James pointed to the Civil Rights Act as what he believed was a “Federal encroachment upon individual liberty.”

Any politician who has been around for a while usually has a sixth sense as to elections. One can usually get a sense of just how things are going and Cliff Davis likely sensed he was being hard pressed inside the Democratic primary. The congressman used a telegram from President Johnson which George Grider cleverly turned to his own political advantage. Grider reminded newsmen the president had sent a similar communication to Congressman Charles Buckley of New York, who had gone on to lose the Democratic primary after having been in Congress for thirty years. An increasingly angry Congressman Davis insisted Grider “is not telling the truth.” “Ask Charles Halleck, Republican Minority Leader, or any Republican barring none in the House of Representatives if Cliff Davis has integrity and leadership qualities,” Davis thundered. “Ask any Democrat (the same question).”

As to Grider’s persistent charge the congressman had done nothing to bring industry to Memphis, Davis said he had brought 15,000 Federal jobs with an annual payroll of more than $65 million. “I say, what have you done, Squire?” Congressman Davis wanted to know.

The week of the election, the Commercial Appeal reiterated its endorsement of Congressman Cliff Davis. The editorial heralded the seniority of Davis in the House as well as praised his efforts in serving the people throughout his tenure. The editorial concluded, “It is to the advantage of Shelby County to retain the services of Clifford Davis in the House.” It was something less than a stemwinder of an endorsement after twenty-four years in Congress.

The campaign manager for the Davis campaign was attorney Hal Gerber, son of William Gerber, who had been the righthand man of the late E. H. Crump and former district attorney for Shelby County. Gerber readily acknowledged prior to the primary election the congressman had seen some defections amongst Black Democrats who had been disappointed and angered by Davis’ opposition to the Civil Rights bill.

A reporter shadowed the congressman for an entire day just before the election. Cliff Davis began the day at 5 a.m. having his usual breakfast of orange juice, black coffee sweetened with saccharine, and two “thin” slices of buttered toast. By 6:50 a.m., the candidate was shaking hands at the Memphis Light, Gas & Water Division office. Within a couple of hours, Congressman Davis had courted the votes of approximately two hundred working men. Davis returned to his campaign headquarters where he attended to the official business that never ends for a congressman; tending to the needs of individual constituents. Davis squeezed in a visit to his dentist for a bit of repair work before hurrying to the Tennessee Club to speak to a service organization. Cliff Davis had been in politics for a long time, as he left his speaking engagement, he told the reporter covering him, “I can make a lot more money doing something else (other than serving in the House of Representatives). I have a job waiting for me if I’m not elected.”

As it happened, Cliff Davis had good reason to be concerned. As the election returns began to dribble in, it was readily apparent the incumbent was in trouble. A reporter for the Commercial Appeal reported the jubilation of George Grider’s supporters as they watched the returns coming in from the various precincts in Shelby County. Evidently the former submarine commander remained the calmest man in the room as he greeted friends and supporters while sending up clouds of smoke from the pipe which was almost always dangling from his mouth. A cheer tore through the room when one campaign worker claimed the headquarters for Congressman Davis was “very glum and dejected” around 11 p.m. The same coalition of organized labor and Blacks had united in their support for Congressman Ross Bass for the Democratic nomination for the U.S. Senate and George Grider for Congress. One Grider backer warmly greeted a Black woman whose precinct had reported a huge margin for the challenger, saying, “It looks like you did your work well.”

As the clock moved towards midnight, Grider’s lead was growing. Hal Gerber, when asked for a statement, wryly replied, “Now I lay me down to bleed awhile.” Only a candidate who has stepped up to give a concession speech can know how difficult it is to do so. Davis, speaking “with an obvious note of sorrow in his voice,” told his supporters, “I’ll love all of you forever and no matter what happens, I’m proud to be a resident of Tennessee and this great nation.”

Cliff Davis had been defeated. George Grider went on to serve a single term in the House before losing to a Republican in 1966. Davis became a lobbyist and consultant and closed his apartment in Memphis. Although he returned occasionally, Davis lived in Washington until his death in 1970.