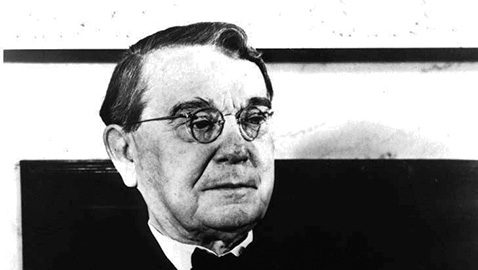 Kenneth D. McKellar was the first person ever to be popularly elected to the United States Senate in Tennessee. McKellar was also Tennessee’s longest serving senator, a record that remains unbroken. All told, K. D. McKellar spent forty-two years in Congress; six in the House of Representatives and thirty-six in the U. S. Senate. McKellar was quite popular in his home state precisely because he looked after Tennessee and her people. It was said there was hardly a family in Tennessee who had not been the beneficiary of a favor from Senator McKellar.

Once during a debate on the floor of the Senate, the term “McKellarism” was bandied about. With his usual candor, McKellar confronted the issue directly. “If loyalty to my friends and showing appreciation of their friendship, if seeing that my state receives its portion of public favors so that our people may progress and advance with other sections, is ‘McKellarism’, as has been charged, I gladly meet the issue,” McKellar retorted. “If what I have done is McKellarism, I stand for McKellarism.” And so he did.

As the ranking and oftentimes acting Chairman of the powerful Senate Appropriations Committee, Senator McKellar poured what would be today hundreds of billions of dollars into Tennessee. Perhaps the most legendary — and true — story about Kenneth McKellar is that told by his successors in the United States Senate from Howard Baker to Lamar Alexander. Summoned to the White House by President Franklin D. Roosevelt, FDR asked McKellar if he could hide $2 billion, a staggering sum for the time, in the budget. Without missing a beat, McKellar replied, “Of course I can, Mr. President, but where in Tennessee are we going to hide it?” K. D. McKellar and President Roosevelt hid it in Oak Ridge, which became the “Atomic City.”

McKellar was an accomplished feudist and would not tolerate anyone or anything that might impede Tennessee’s progress. Even such otherwise fearless feudists like Secretary of the Interior Harold Ickes thought better than to tangle with the wily McKellar.

Perhaps the most notable columnist of the day — and at a time when most people in the United States gleaned their news from newspapers — was Drew Pearson. Pearson was known to play fast and loose with the facts, to be as kind as possible. His nationally syndicated “Washington Merry-Go-Round” was widely read

and he had a radio program, which was heard around the country. At one point, as many as sixty million people read Pearson’s column, which was carried in 650 newspapers across the country.

Pearson promoted his own liberal views and actively tried to influence Members of Congress on issues that were personally important to him. Drew Pearson also punished those who had angered him; for instance, he waged a bitter war of words on Millard Tydings, a U. S. senator from Maryland who had been critical of Pearson’s father, Paul, who had been appointed governor of Puerto Rico by FDR.

Loathed by much of official Washington, including Franklin Roosevelt and Harry Truman, two of Pearson’s favorite targets were Tennesseans: Cordell Hull and Kenneth McKellar. Pearson liked to bedevil Secretary of State Hull because of the columnist’s friendship with Assistant Secretary Sumner Welles. Drew Pearson simply didn’t like McKellar and liked to jab the senator about his sister-in-law being on his payroll. McKellar’s younger brother, Don, was also his secretary, of Chief of staff, and had married Janice Tuchfeld, who had been a secretary in the senator’s office since 1923. Don died of pneumonia while suffering from lung cancer in December of 1945. Pearson busily rubbed the sore, which caused Janice McKellar to offer her resignation to her brother-in-law, who wouldn’t hear of it. Pearson had tallied up Don’s salary, along with another McKellar brother, Clint, who was the postmaster of Memphis, and that of Janice McKellar. Pearson had also regurgitated a story that was also part of the McKellar legend; namely that the Tennessean, during an especially hot debate on the Senate floor, had drawn a knife on New York senator Royal S. Copeland. McKellar wore a pen knife at the end of his keychain, but it was about two inches long and hardly able to carve up the New Yorker. Still, it was a colorful and grand story and Drew Pearson was not one to let a good tale to go to waste irrespective of how true or untrue it might be.

In May of 1944, Senator McKellar took to the Senate floor to denounce the hated columnist in one of his most spectacular performances. Even Pearson admitted McKellar had “hit the high watermark for gorgeous invective.” Drew Pearson had referred to McKellar as a “blustery mountaineer”, causing the senator to tell his colleagues, “I digress long enough to say that I do not know Mr. Pearson but he really is ignorant, is he not?” The Senate Chamber rocked with appreciative laughter as McKellar began to warm to his subject. “I was not born in the mountains,” McKellar said. “Yet this ignorant, blundering, lying ass seems to think there is something discreditable about mountains.” McKellar paused for a brief moment. “The truth is that it is not a dishonor to be a mountaineer,” Senator McKellar rumbled. “Only a blatant jackanapes would have made a point of that.” McKellar told his colleagues he understood Pearson and the senator’s foe David Lilienthal were good friends. “What is fitter than two liars standing up for each other?” McKellar inquired.

“He is just an ignorant liar, a pusillanimous liar, a peewee liar,” the senator thundered. McKellar disputed Pearson’s claim the senator was famous for his ability to secure patronage as well as his temper, although Senator McKellar did confess, “It may be that I have a temper.”

McKellar quoted from Pearson’s column, “Most of his colleagues remain in awe of McKellar’s lashing tongue; some even in fear.” McKellar looked up, the very picture of innocence, seeming astonished as he cried, “If any Senator stands in awe of me for any reason, I do not know it. I have never heard of such a thing. The only thing I can say about that statement is that it is an absolute falsehood.”

Pearson wrote McKellar was the acting chairman of the Senate Appropriations Committee, which allowed the Tennessean to kill off the pet projects of his fellow senators if he was so inclined, a statement which the senator read on the Senate floor. “I never heard of such a thing!” McKellar snorted. “However, since this lying brute has brought up the subject, I wish to ask my friends if any of them have ever heard of my attempting to kill their projects? I do not ask any of them to speak up unless they want to. I shall be glad to have them do so if any of them have anything to say about it. Did I ever kill a pet project of any Senator, be he Democrat, Republican or Independent? I never did such a thing in my life. My whole life here brands that as a lie. It is just a plain Drew Pearson lie.”

Senator McKellar came to the portion of Pearson’s column repeating the charge about his pulling a knife on Royal Copeland. “Listen to this,” McKellar barked. “Of all the remarkable statements that have been made about me in this article, this is one of the most false, most damnable, most outrageous, the most colossal lie I have ever read about myself or anyone else.” McKellar read the offending portion of the Pearson column to his colleagues: “’They remember the occasion when McKellar pulled a knife and charged a colleague on the Senate floor, until he was disarmed.’” That sent McKellar on yet another spiraling denunciation of Drew Pearson. “Not only have I never pulled a knife on any Senator, but I have never pulled a knife on anyone in my entire history,” McKellar said. At that point, red-cheeked Harry Byrd of Virginia grinned and poked Senator Bennett Champ Clark of Missouri, who grinned back. Senator McKellar’s baleful gaze fell upon Senator Clark who got to his feet and asked the Tennessean if he would yield the floor. “I yield,” McKellar replied. “Not withstanding my temper, I yield.”

Clark, who supposedly had told Pearson the story about McKellar attacking Royal Copeland with a knife, meekly said he could certainly “bear witness” Senator McKellar “was never intemperate with me.”

Pearson had claimed in his column that Clark was the senator who grabbed and held onto the enraged McKellar to keep him from doing bodily harm to Copeland. Allegedly, McKellar was shouting Senator Copeland was a son-of-a-bitch and more besides. Pearson also claimed it was Bennett Champ Clark who had told him McKellar had a “clasp knife” which he was taking from his pocket when the Missourian had restrained him. Pearson later ruefully noted Clark had denied saying any such thing.

Senator K. D. McKellar was speaking to a friendly audience, most of whom had no love for Drew Pearson. McKellar then hit the heights of the ways he defined just what kind of prevaricator the columnist was. The senator roared, “When a man is natural born liar, a liar during his manhood and all the time, a congenital liar, a liar by profession, a liar for a living, a liar in the daytime, and a liar in the nighttime, it is remarkable how he can lie.” The Senate Chamber reverberated with laughter. Most of the senators were thoroughly enjoying McKellar’s performance.

It was Senator A. B. “Happy” Chandler of Kentucky who suggested an appellation for Drew Pearson that McKellar appreciated and liked very much. Chandler asked McKellar to yield the floor, which he did and the Kentuckian said, “I believe there is a definition for that sort of liar. He is called a revolving liar.” “A revolving liar!” McKellar shouted with delight. “It suits Pearson exactly.” Senator McKellar immediate incorporated Chandler’s suggestion into his speech. “Listen to this infamous liar, this revolving liar…”

Happy Chandler may have been thinking of former Kentucky governor William Fields, who once described an opponent as “an automatic, hydraulic, revolving liar.”

As he almost always did when heated up, Kenneth McKellar spoke largely extemporaneously and refuted each of Pearson’s allegations point by point. McKellar demanded any fellow senator stand up and correct him if he was wrong. None did. Finally, McKellar wondered, “Mr. President, do Senators all know what a skunk is?” The Tennessean did not wait for a reply. “The animal called a skunk cannot change his smell. This human skunk cannot change his smell. He will always be just a low-life skunk.” Senator McKellar then assumed a rather questionable air of being contrite and said sweetly, “Mr. President, if I have been guilty of an exhibition of temper, I hope the Senators will forgive me.”

Allen Drury, the Pulitzer-prize winning novelist, was then working for the Associated Press as a reporter covering the United States Senate at the time Kenneth McKellar gave Drew Pearson a verbal thrashing on the floor of the Senate.

Young Drury kept a diary and noted, “Drew Pearson tangled with McKellar today. Like the fight little Peterkin heard about in the poem, it was a famous battle.” Drury gave a full account of McKellar’s performance, writing, “His voice roared one moment and sank to grimly amused conversational tone the next. His right arm flailed the air and his forelock fell across his sleepy eye. He did not get a case of the weepy sniffles, as he is sometimes wont to do, but aside from that, he put on quite a complete exhibition of the McKellar repertoire.” Drury assessed McKellar’s performance on the Senate floor, writing with some admiration, “Old Mack put on a pow’ful good show in reply” to the muckraking columnist.

Years later after Kenneth McKellar had died, Mike Wallace interviewed Drew Pearson. One of the first things Wallace asked Pearson about was his skinning by the senator from Tennessee.