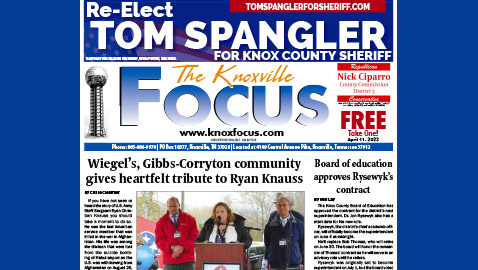 If you have not seen or heard the story of U.S. Army Staff Sergeant Ryan Christian Knauss you should take a moment to do so. He was the last American service member that was killed in the war in Afghanistan. His life was among the thirteen that were lost from the suicide bombing of Kabul airport as the U.S. was withdrawing from Afghanistan on August 26, 2021.

This past weekend friends, family, veterans and east Tennesseans alike gathered in memoriam of Staff Sgt. Knauss and to celebrate the heroic actions he displayed on that fateful August day.

The memorial service took place Saturday, April 9, two days after what would have been Knauss’ 24th birthday. It began at 10 a.m. with a procession led by veterans that started at the Veterans of Foreign Wars Center and concluded at the Weigel’s on the corner of Tazewell Pike and Emory Road next to the memorial site set up in his honor last year.

Gibbs High School’s ROTC honored Staff Sergeant Ryan Knauss with a raising of the flag ceremony. A memorial plaque was dedicated to Ryan and is permanently placed in the Weigel’s memorial garden at 7420 Tazewell Pike. The memorial dedication was followed by a birthday celebration at the Corryton Weigel’s and the weekend concluded with a community hike at House Mountain on Sunday.

Among those in attendance at the memorial were 2nd District Congressman Tim Burchett, Knox County Mayor Glenn Jacobs, Knox County Sherriff Tom Spangler, Senator Becky Massey Duncan as well as many other esteemed political leaders from Knox County and the surrounding area.