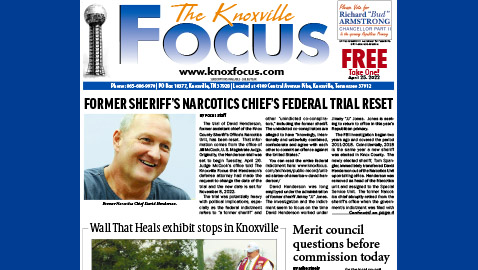 The trial of David Henderson, former assistant chief of the Knox County Sheriff’s Office’s Narcotics Unit, has been reset.  That information comes from the office of Jill McCook, U. S. Magistrate Judge.  Originally, the Henderson trial was set to begin Tuesday, April 26.  Judge McCook’s office told The Knoxville Focus that Henderson’s defense attorney had made the request to change the date of the trial and the new date is set for November 8, 2022.

The trial was potentially heavy with political implications, especially as the federal indictment refers to “a former sheriff” and other “unindicted co-conspirators,” including the former sheriff. The unindicted co-conspirators are alleged to have “knowingly, intentionally and unlawfully combined, confederate and agree with each other to commit an offence against the United States.”

You can read the entire federal indictment here: www.knoxfocus.com/archives/public-record/united-states-of-america-v-david-henderson/

The FBI investigation began two years ago and covered the period 2011-2018.  Coincidentally, 2018 is the same year a new sheriff was elected in Knox County.  The newly elected sheriff, Tom Spangler, immediately transferred David Henderson out of the Narcotics Unit upon taking office.  Henderson was removed as head of the Narcotics unit and assigned to the Special Service Unit.  The former Narcotics chief abruptly retired from the sheriff’s office when the government’s indictment was filed with the federal court.  David Henderson then sought to claim his pension benefits and retired.

Henderson is charged with having misused federal funds under his discretion and authority, which were intended to be spent for legitimate supplies, equipment and information from informants.  Drug cash is oftentimes seized by law enforcement agencies and used by those same agencies and departments to combat the flow of illegal drugs into communities.

The federal indictment can be summarized as charging that the former Narcotics chief and others used money with which to enrich themselves; the alleged misuse of funds included federal monies.  Henderson is also charged with having used on-duty deputies and employees as labor for various construction and work projects unrelated to official business.

The indictment details a lengthy list of items the federal government says was bought unlawfully.  Henderson is being asked to return numerous items bought with drug cash or a sheriff’s office credit card, including an Apple TV, several Apple iPods, and Apple MacBooks.

The federal indictment states that beginning in 2011 through 2018, the only direct superior to which David Henderson answered was the “former sheriff.”