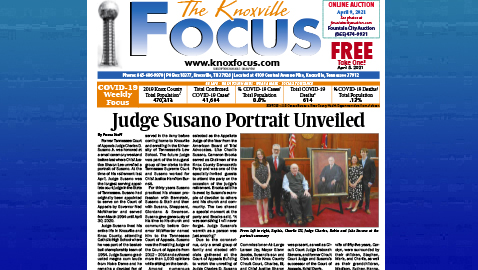 Former Tennessee Court of Appeals Judge Charles D. Susano Jr. was honored at a small ceremony weekend before last where Chief Justice Sharon Lee unveiled a portrait of Susano. At the time of his retirement last April, Judge Susano was the longest serving appellate court judge in the State of Tennessee. Susano had originally been appointed to serve on the Court of Appeals by Governor Ned McWherter and served from March 1994 until April 30, 2020.

For thirty years Susano practiced his chosen profession with Bernstein, Susano & Stair and then with Susano, Sheppeard, Giordano & Swanson. Susano gave generously of his time to his church and community before Governor McWherter named him to the Tennessee Court of Appeals. Susano was the Presiding Judge of the Court of Appeals from 2012 – 2014 and authored more than 1,000 opinions while sitting on the bench.

Among numerous honors, Judge Susano was selected as the Appellate Judge of the Year from the American Board of Trial Advocates. Like Charlie Susano, Cameron Brooks served as Chairman of the Knox County Democratic Party and was one of the specially-invited guests to attend the party on the occasion of the judge’s retirement. Brooks said he is awed by Susano’s example of devotion to others and his church and community. The two shared a special moment at the party and Brooks said, “It was something I will never forget. Judge Susano’s warmth as a person was just amazing.”

Due to the coronavirus, only a small group of family and elected officials gathered at the Court of Appeals Building to watch the unveiling of Judge Charles D. Susano Jr.’s portrait. Present were Commissioner-At-Large Larsen Jay, Mayor Glenn Jacobs, Susano’s son and Clerk of the Knox County Circuit Court, Charles, III, and Chief Justice Sharon Lee. City Judge John Rosson was present, as well as Circuit Court Judge Deborah Stevens, and former Circuit Court Judge and Susano’s successor of the Court of Appeals, Kristi Davis.

Judge Susano and his wife of fifty-five years, Carolyn, were surrounded by their children, Stephen, Maria, and Charlie, as well as their grandchildren, Madison, Sydney, Hanna, Sophie, Jake and Hudson.