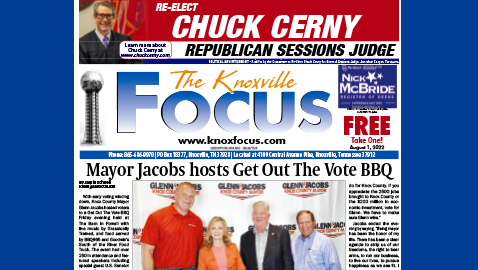 Mayor Jacobs hosts Get Out The Vote BBQ

With early voting winding down, Knox County Mayor Glenn Jacobs hosted voters to a Get Out The Vote BBQ Friday evening held at The Barn in Powell with live music by Grassically Trained, and food served by BBQ865 and Goodwin’s South of the River Food Truck. The event had over 250 in attendance and featured speakers including special guest U.S. Senator Marsha Blackburn.

Jacobs started the evening by recognizing the tremendous turnout, all who put the event together, and all candidates present. Larry Bailey, owner of The Barn, led the BBQ in prayer and the Pledge of Allegiance.

Following the prayer, Jacobs introduced the “great sheriff,” Knox County Sheriff Tom Spangler, who thanked all the veterans in the crowd, “We appreciate your service. I’m also happy to share this ride and journey with my friend Glenn Jacobs. I couldn’t be more blessed. Color in the spot that says ‘Jacobs.’ We need him. Make sure we get him re-elected. I wish Mayor Jacobs the best. Please support this ’little guy.’”

Jacobs referenced his time in the WWE as he introduced the next speaker, “There is one person that commanded such respect and that was The Undertaker. The Tennessee General Assembly demands the same respect. With the same integrity and commitment, Lieutenant Governor of Tennessee Randy McNally.”

McNally joked, “Didn’t know I’d be compared to The Undertaker. Get out there and vote for Mayor Jacobs — he has kept Knox County in great fiscal shape.”

Mayor Jacobs introduced special guest Senator Blackburn who told the crowd, “I’m happy to be here with the nation’s greatest warriors of freedom fighters. Thank you for what you do for Republicans, bringing Tennessee values. This is a great county with great mayors. And thank you to Glenn Jacobs for all you do for Knox County. If you appreciate the 2500 jobs brought to Knox County or the $200 million in economic investment, vote for Glenn. We have to make sure Glenn wins.”

Jacobs ended the evening by saying, “Being mayor has been the honor of my life. There has been a clear agenda to strip us of our freedoms, the right to bear arms, to run our business, to live our lives, to pursue happiness as we see fit. I fought against government overreach and unconstitutional mandates. I’m most proud of not raising taxes.

“I humbly ask for your vote so I can continue fighting for you and our freedom. We need your support; we need your vote. Please keep this in Republican hands, so we remain strong, prosperous, and free. Thank you for being here, I encourage you to get out and vote, and everyone you know to do the same.”