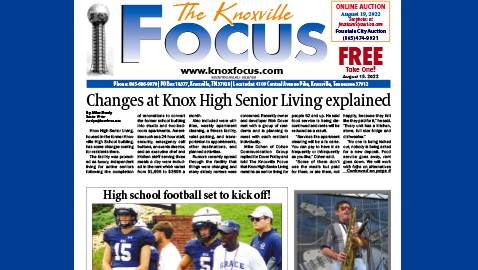 Knox High Senior Living, housed in the former Knoxville High School building, has some changes coming for residents there.

The facility was promoted as luxury, independent living for active seniors following the completion of renovations to convert the former school building into studio and two-bedroom apartments. Amenities such as a 24-hour staff, security, emergency call buttons, an events director, and an executive chef and kitchen staff serving three meals a day were included in the rent which varied from $1,695 to $3895 a month.

Rumors recently spread through the facility that things were changing and many elderly renters were concerned. Recently owner and developer Rick Dover met with a group of residents and is planning to meet with each resident individually.

Mike Cohen of Cohen Communication Group replied for Dover Friday and told The Knoxville Focus that Knox High Senior Living remains as senior living for people 62 and up. He said food service is being discontinued and rents will be reduced as a result.

“Services like apartment cleaning will be a la carte. You can pay to have it as frequently or infrequently as you like,” Cohen said.

“Some of them don’t use the meals but paid for them, or ate them, not happily, because they felt like they paid for it,” he said. “Every unit has a kitchen, stove, full size fridge and dishwasher.”

“No one is being kicked out, nobody is being asked for a new deposit. Food service goes away, rent goes down. We will work with folks on alternatives for food… delivery, group orders, whatever,” he continued.

“Our concern we have is that people moved in fully capable of independent living, but now need assisted living. We are not designed, licensed or staffed to be assisted living.  It is a very different deal. If someone wants to move to such a facility we will help with that.

“We will have a social worker to help them with that and will consider all facilities, not just Dover facilities,” Cohen said.

“Rick will do everything he can to make this work for folks.”