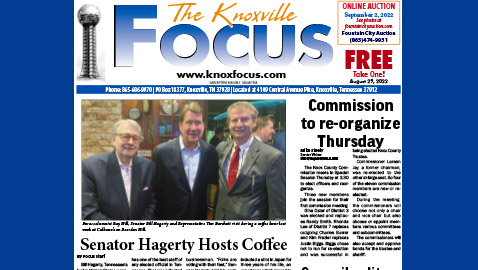 Bill Hagerty, Tennessee’s junior United States senator, has been traveling the state during the recent congressional recess. Hagerty is listening and talking about economics with Tennesseans of all walks of life as he moves about Tennessee.

Senator Hagerty hosted an early morning coffee for Knoxvillians last Friday at Calhoun’s on Bearden Hill. The crowd included many elected officials, businesspeople and residents. The crowd more than filled up the room. Folks greeted one another, sipped coffee, and visited informally with Senator Hagerty. The senator is fortunate in that he has one of the best staff of any elected official in Tennessee. That was reflected in not only how well organized the coffee was, but also in how smoothly things ran. Wearing a blue business suit and shirt without a tie, the youthful senator renewed his acquaintances with old friends and made new ones.

The senator was introduced by Mayor Glenn Jacobs, who made a brief yet eloquent introduction. Jacobs proved he knew a thing or two about what is going on in the nation’s Capital.

Hagerty spoke on a variety of topics and emphasized his background and experience as a businessman. “Folks are voting with their feet,” Senator Hagerty told his audience, noting how people from all over the country are flocking to the Volunteer State. Hagerty noted people are coming from Illinois, Michigan and especially California to relocate in Tennessee.

The senator said the quality of life and the way Tennessee is governed has much to do with why people want to move here, as well as the low taxes.

Senator Hagerty referred to his time as a member of former Governor Bill Haslam’s Cabinet as Commissioner of Economic & Community Development. Hagerty’s experience also included a stint in Japan for three years of his life, an experience which proved to be invaluable when he was named America’s Ambassador to Japan. Japan is not only our country’s closest ally in the region but also the third largest economy in the world today.

Hagerty mentioned his time as Tennessee’s Commissioner of Economic & Community Development, telling his listeners he wanted to properly reorganize the agency to make it more efficient. Ultimately, that involved he reducing the number of positions in the agency by 40%. The senator said he was grateful to Bill Haslam for allowing him to make the necessary changes, even though the former governor caught some political heat at the time.

Senator Hagerty discussed his successful push to have semiconductors made in the United States, lessening our country’s dependence upon countries “who don’t have America’s best interests at heart.” The senator illustrated he had recently been in Vonore where he observed $50 million dollars worth of boat inventory still sitting on the dealers’ lot, unable to be sold as they all needed chips. The senator’s discussion of the subject perfectly illustrated how his background and experience in business meshed with his relatively new role as a lawmaker. Hagerty explained the legislation in laymen’s terms, which eliminates much of the red tape involved to obtain the permitting required to build semiconductors and other essential manufacturing facilities here in the United States, which will be a great help in having these enterprises and projects to locate in our own country.

Joe Biden recently signed Hagerty’s bill into law, which brought a big hand of approval from the members of the audience.

Hagerty’s bill will create jobs for thousands of Americans, as well as lessen our country’s dependence upon foreign powers, especially China. The senator hailed the legislation as an effort to “end our reliance upon Communist China, reinvigorate our manufacturing independence, and release government red tape to unleash American competitiveness and innovation.”

The senator acknowledged the Left’s obsession with destroying the fossil fuel industry and ignored the fact solar panels, wind mills, and the batteries all came from China and would put our country largely at the mercy of the Chinese. Having been a successful investor himself, Senator Hagerty said when an industry has been targeted by the government for extinction, it is not likely to readily attract investors.

“I came to Washington to create jobs for the American people and bolster our national security to beat the Chinese Communist Party in the competition that will define the century, and my first piece of legislation signed into law advances both of these important goals,” Hagerty said at the time.

Hagerty holds committee assignments of some importance to Tennessee including the Appropriations, Banking, Housing & Urban Affairs Committees, as well as Foreign Relations and Rules & Administration.

Congressman Tim Burchett left his vigil beside his injured daughter Isabel’s hospital bed to be present, accompanied by his Chief of Staff Michael Grider. Bobby Griffits, the Chief of Staff for Burchett’s predecessor in Congress, Jimmy Duncan, was moving through the crowd greeting old friends before Senator Hagerty took center stage. Burchett was clearly weary and the strain of deep worry etched his face, but the congressman quietly thanked the numerous people asking about the well-being of his daughter and wife.

Senator Hagerty deftly moved from topic to topic and took questions from the audience members. Hagerty demonstrated a wide yet thorough understanding of the problems facing our country today and those experienced by working families. Among the questions was one from Kyle Ward, the youngest member of the Knox County Commission, who asked about the senator’s legislation on cryptocurrency.

Before closing his remarks, Bill Hagerty thanked Knox Countians and Tennesseans for giving him the opportunity to serve in the United States Senate. It was pretty clear the people leaving the filled-to-capacity room thought Bill Hagerty was doing pretty well by Tennessee and Tennesseans.