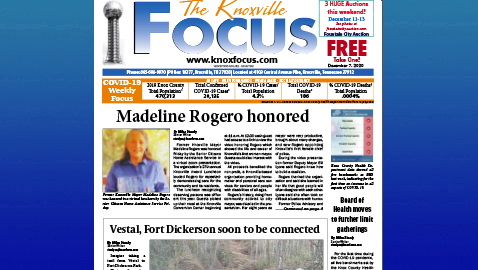 The luncheon recognizing deserving persons was different this year. Guests picked up their meal at the Knoxville Convention Center beginning at 11 a.m. At 12:30 each guest had access to a link to view the video honoring Rogero which showed the life and career of Knoxville’s first woman mayor. Guests could also interact with the video.

All proceeds benefited the non-profit, a Knoxville-based organization providing homemaker and personal care services for seniors and people with disabilities of all ages.

Rogero’s history, rising from community activist to city mayor, was detailed in the presentation. Her eight years as mayor were very productive, brought about many changes, and saw Rogero appointing Knoxville’s first female chief of police.

Rogero thanked the organization and said she learned in her life that good people will often disagree with each other. Lyons said she often took on difficult situations with humor.

Former Police Advisory and Review Committee Chair and Community Relations Director Avice Reed said Rogero viewed her mayoralty position “not as just a job but a passion.” She also said “Knoxville looks much different” because of Rogero’s leadership.

SCHAS CEO Tim Howell concluded the video by saying the organization has continued servicing people throughout the pandemic and has funds that will last through June of 2021. Past honorees include Jim Haslam, Pat Summit, Peyton Manning, Howard Baker, Jim and Kay Clayton, and Jimmy Duncan.