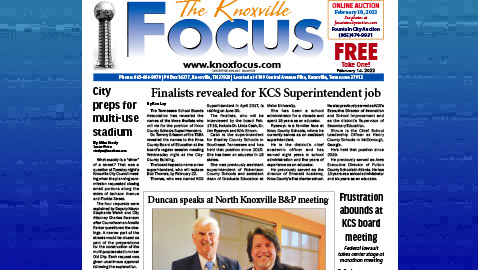 The Tennessee School Boards Association has revealed the names of the three finalists who will vie for the position of Knox County Schools Superintendent.

Dr. Tammy Grissom of the TSBA revealed the names to the Knox County Board of Education at the board’s regular session meeting Wednesday night at the City-County Building.

The board hopes to name a new superintendent, who will replace Bob Thomas, by February 22.

Thomas, who was named KCS Superintendent in April 2017, is retiring on June 30.

The finalists, who will be interviewed by the board Feb. 17-18, include Dr. Linda Cash, Dr. Jon Rysewyk and Kirk Shrum.

Cash is the superintendent for Bradley County Schools in Southeast Tennessee and has held that position since 2015. She has been an educator in 18 states.

She was previously assistant superintendent of Robertson County Schools and assistant dean of Graduate Education at Union University.

She has been a school administrator for a decade and spent 18 years as an educator.

Rysewyk is a familiar face at Knox County Schools, where he currently serves as an assistant superintendent.

He is the district’s chief academic officer and has served eight years in school administration and five years of experience as an educator.

He previously served as Area Executive Director of Fulton County Schools in Atlanta. He has 10 years as a school administrator and six years as an educator.