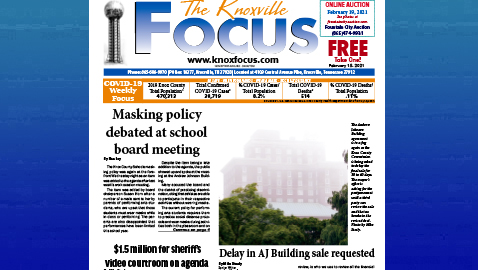 Another delay in finalizing the sale of the Andrew Johnson Building is being requested from the Knox County Commission. The delay request has been added to the commission’s work session agenda for Tuesday. Normally the commission meets on the third Monday of each month but that day is a national holiday, Presidents Day.

Finance Director Chris Caldwell responded to Knoxville Focus questions about the addition to the agenda, including whether or not the $6 million agreement is being revised or if the sale of the historic building is in jeopardy.

“It’s nothing like that, just a timing issue with the third party review.  MuniCap, third party review, is who we use to review all the financial documents and make a recommendation on the PILOT terms and amount,” he replied.

“The process is still ongoing, so we are asking for a deferral in the development agreement until we get the report back,” he said Thursday.

“They had conversations with Mr. (Phillip) Welker this week, but we haven’t seen the report yet, and we didn’t want to give it to commission at the last minute,” Caldwell said. Welker is the Nashville developer.

The Focus also asked several Knox County Commissioners about the addition to the agenda and Chairman Larsen Jay replied, “My understanding is the third-party (MuniCap) review of the PILOT terms, payment, agreement, etc. is not yet complete and as such they needed more time and is being deferred till April.” Jay forwarded a copy of the resolution sent to commission members that is not yet on the agenda.

Another commissioner replied they had not been informed of the addition to the agenda and another commissioner told The Focus that several commissioners have concerns about continuing the agreement to sell the AJ Building. The concern is that the latest purchase agreement, with a TIFF or PILOT tax deferment, will not produce any revenue for the county for years.

In an update to commissioners from the mayor’s office said the following:

“On the legislative front, we are seeking to defer a vote on the PILOT payment for the Andrew Johnson Hotel building for thirty to sixty days because the third party review has not yet been completed.”

The Andrew Johnson Building, originally a hotel and once the tallest building in the city, has been the home of the Knox County School System. Those administration offices will be relocated to the TVA East Tower in an agreement between the city, TVA, and the University of Tennessee.

The final sales agreement with BNA Associates was approved by the commission in December. The deal goes back to 2017 when BNA came in as the low bidder and proposed a $43 million renovation that would include retail space, a hotel, and apartments. The company had difficulty raising the investment money and came back with a plan to eliminate the hotel rooms but build the apartments so they could be converted to hotel rooms.

BNA is also requesting an in lieu of taxes break for the project and that request is apparently being reviewed by MuniCap inc., a public financing consulting firm.

Several controversies have surrounded the BNA deal including the building having an estimated insurance value of about $15 million but selling for $6 million.