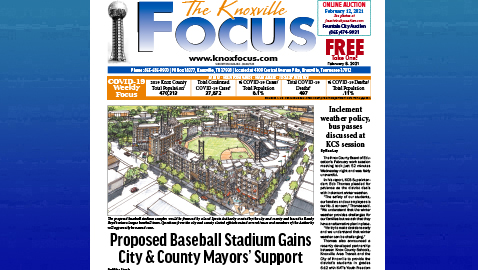 Randy Boyd’s proposal to have the city and county finance a baseball stadium near the Old City came under several questions Thursday when the county commission and city council held a joint work session on the topic.

Jacobs told the joint meeting that he was initially against the stadium proposal because it would require public funding. He said such a project would allow the county to compete with other communities and said, “You couldn’t find a better partner” than Boyd.

Kincannon called the stadium idea an investment in our community and called Boyd “a great partner.”

To kick off the campaign to fund the stadium both the commission and council will hear the nominees for a “Sports Authority” soon. That public body might eventually issue its own bonds to secure funds, oversee the design and construction, and own the stadium. The facility might be open daily for people to visit to walk, exercise, etc., but leased for 10 years to Boyd’s Knoxville Smokies minor league baseball team. The lease would permit the team to manage the stadium, secure events like concerts, and profit from such activities. The city and county might benefit from taxes and increased tourism.

Boyd is also planning a $140 million development next to the stadium with apartments, retail businesses, and the like. That development is likely to require a tax break to get underway. Caldwell said the stadium and the proposal offer “much more than baseball” with opportunities for concerts, markets, weddings and more.

Welch said the stadium would be financed and owned by the Sports Authority and could hold up to 200 events a year including baseball games. Mamantov said the rental to the team, the taxes on ticket sales, and income from out of town visitors, would go a distance in paying any bond debt issued for the project.

Welch said the project is in the early stages and said nominees to the Authority would probably be before the commission and council in March. She said many community meetings and work sessions will be held and a development agreement presented this summer.

Construction could start later this year with the stadium possibly open in the spring of 2023.

Questions from both bodies included how many employees there would be at the stadium, if the project would mean a tax increase, and if Boyd would get community input from the African American neighborhood surrounding the project. Mamantov was also asked about a third-party review of the proposal and he replied that a Request for Proposal would be issued by the Authority and reviewed before approval.

Asked why Boyd doesn’t pay for the stadium and nearby complex himself, Boyd replied, “It is not economically viable.” Mamantov said that public financing of stadium for minor league baseball is common.

Several lengthy questions and comments came from Councilwoman Amelia Parker, who called for many more work sessions. Chairman Jay attempted to pause her questions to permit others to comment. Parker said that two hours was not long enough for the work session.

“We have to have an end point and let other people ask questions,” Jay told her.

“Come on, you all, we are the government, this is ridiculous,” Parker replied. She called for a work session just on financing before members of the new Sports Authority are approved.

“This is not a done deal, there’s lots more to iron out,” said Councilwoman Lauren Rider.