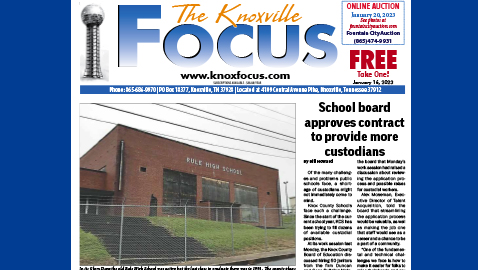 Old Rule High School will be demolished and the funding for that project is on the agenda for the Knox County Commission work session meeting on Tuesday.

Named for the noted Knoxville newspaper editor Captain William Rule who died in 1928, it originally opened in the fall of 1927. The facility was an elementary-junior-high school with 525 students enrolled in the elementary grades and 261 in the junior high and high school grades. Lower grades were dropped year after year until eventually the school just had grades 7–9.

Rule High School was closed in 1991. The main building is in horrible shape. In June of last year, Knox County Mayor Glenn Jacobs said the county has begun the formal process for the sale and redevelopment of the abandoned high school. The property was acquired by Knox County as surplus property in 2016. The old facility has been used to house the Knox County Schools’ maintenance division.

The commission is being asked to approve a $786,200 demolition contract with Modern Day Wrecking for the project. The idea is to clear the valuable property, sell it, and get it back on the tax rolls.

The legacy of the school will continue after it is razed.

Margaret Wilson was a 1970 graduate of Rule and told The Focus, “I am truly disappointed that our dear ole Rule High School is on the chopping block for demolition. It should have never been closed in the first place. It was very family-friendly and I loved it and it had a bond that will forever be instilled in my memories.

“I went there from 1964 to when I graduated in 1970. I met my husband (and) we have been married now 52 years. We were high school sweethearts and we both are from similar families. Everybody who went there were from the same background, no one was better than the other.”

Several internet and Facebook sites honor the former high school and the Rule High Class of 1970 held its 50-year reunion in 2020.

Mary C. Hodge Halsey wrote the book, “Golden Memories of Rule High School – A History.” It is a 426-page book with pictures, copies of school programs, and stories of faculty members and students.

Rule High School and other former and existing school annuals, relics, and various items are available at the Knox County Museum of Education at the Sarah Simpson Professional Development and Technology Center at 801 Tipton Avenue.

“I loved my days at good ole Rule. ‘Rule was a cool school,’ we used to say,” remembered Wilson.