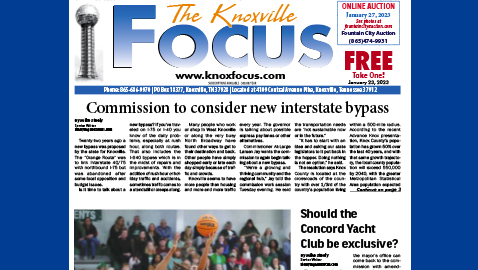 Twenty-two years ago a new bypass was proposed by the state for Knoxville. The “Orange Route” was to link Interstate 40/75 with northbound I-75 but was abandoned after some local opposition and budget issues.

Is it time to talk about a new bypass? If you’ve traveled on I-75 or I-40 you know of the daily problems, especially at rush hour, along both routes. That also includes the I-640 bypass which is in the midst of repairs and improvements. With the addition of rush hour or holiday traffic and accidents, sometimes traffic comes to a standstill or creeps along.

Many people who work or shop in West Knoxville or along the very busy North Broadway have found other ways to get to their destination and back. Other people have simply shopped early or late each day simply because of traffic and crowds.

Knoxville seems to have more people than housing and more and more traffic every year. The governor is talking about possible express pay lanes or other alternatives.

“We’re a growing and thriving community and the regional hub,” Jay told the commission work session Tuesday evening. He said the transportation needs are “not sustainable now or in the future.”

“It has to start with an idea and asking our state legislators to it put back in the hopper. Doing nothing is not an option,” he said.

The resolution says Knox County is located at the crossroads of the country with over 1/3rd of the country’s population living within a 500-mile radius. According to the recent Advance Knox presentation, Knox County’s population has grown 50% over the last 40 years, and with that same growth trajectory, the local county population will exceed 550,000 by 2040, with the greater Metropolitan Statistical Area population expected to exceed 1,100,000 citizens.

The resolution goes on to say that Knox County contains several of the most traveled national highways (I-81 / I-75 and I-40), with I-40 / I-75 running concurrently for 18 miles through the heart of an already congested urban area; and approximately 182,000 vehicles travel through the I-40 / I-75 corridor per day with 16% of the traffic being commercial vehicles.

Jay mentions that in 2020, the Tennessee Department of Transportation calculated the Annual Average Daily Traffic Volume statewide and reported Knox County as having the highest volume and also holding three of the top five highest traffic volumes in the State of Tennessee.

The resolution says the Commission of Knox County resolution encourages TDOT and our state legislators to examine the potential for a new highway bypass around Knoxville.

Knox County Mayor Glenn Jacobs added his support for a solution and wants to see alternatives added to the resolution.

The commission voted to co-sponsor the resolution unanimously.