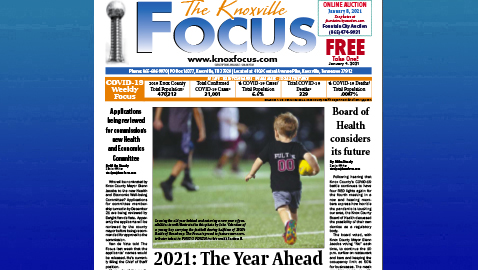 While most people are happy to leave 2020 behind, any of its problems are stretching into this new year along with some opportunities.

COVID-19 is expected to get worse and not wane until mid-year when the majority of citizens will have received one of several vaccines. Until then the health department is asking everyone to continue the necessary steps to avoid spreading the virus. A new strain of the virus from the UK has been found in the United States and, while not more deadly, it is spread more easily.

The conflict between the Knox County Commission and the Board of Health is expected to be resolved in January when the commission meets for a second vote on dissolving the board. If passed, this would place all pandemic oversight into the hands of the Knox County Director of Health.

The city and county will vote on whether or not to create a sports authority to oversee and finance a semi-pro baseball complex downtown. Organized opposition to spending tax-payer money on the project appears to be growing.

Both the city and county are expected to continue their greenway programs. Knoxville voters will see a primary election for council August 31. Five positions are up for grabs including Tommy Smith’s District 1 seat. He was chosen to replace Stephanie Welch who joined the administration of Mayor Indya Kincannon.

The Knox County School Administration will probably be moving from the Andrew Johnson Building this year now that the sales agreement of the historic structure has been approved. They will relocate to the TVA Towers.

Many of the annual events that were canceled in the city and county last year, including the Veterans Day Parade and Neighborhood Conference, are hoped to occur this year. The virtual meetings of most city and county events may continue for a couple of months depending on the spread of the virus.

Work will continue on creating a new Public Safety complex on the site of the former Tennova/St. Mary’s Hospital and the Knoxville-Knox County E-911 plans to use part of the complex for a back-up location. Demolition of the former East Town Mall may begin making way for an e-commerce distribution center and the name of the future occupant may be announced.