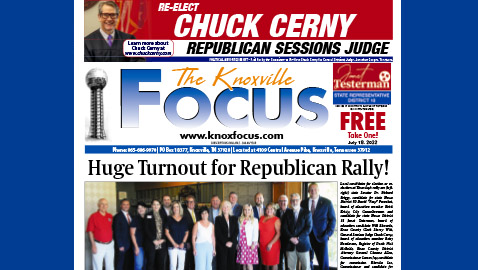 The Get Out and Vote Rally, hosted by Knox County Mayor Glenn Jacobs and Commissioner Justin Biggs, was held at Calhoun’s on the River Thursday night. The room was filled with many officials in the community, all with a common goal in encouraging the community to vote. Glenn Jacobs began the evening by suggesting to “use our spheres of influence to get out and vote.”

All speakers shared in the same sentiment, expressing their appreciation for all those who vote. Many spoke on the importance of voting, challenging voters to “talk to 20 people” and to “take the step to put a name on a ballot.”

Commissioner Justin Biggs, a candidate for county trustee this year, told the group, “I wouldn’t want to stand up with anyone (other) than the crew I have up here with me. There’s a lot of great things ahead.” Commissioner Biggs was accompanied by father Eddie, wife Heather and daughter LillyAnn, who is an “expert in the pledge..”

Also assisting with signs and expressing their pride as an Americans were Wayne Sellars, with wife Jeanne Sellars and grandson Kaicy Sellars Kiumarsi.

Judge Chuck Cerny, who is running for re-election, said of his colleagues, “I have the good fortune to work with these folks. They are truly wonderful servants and great candidates that deserve your support.”

All expressed their excitement for “conservative leadership.” City Councilwoman and candidate for State Representative District 18 Janet Testerman explained, “To be a good steward for what’s important, we must maintain our conservative values.”

BOE member Kristi Kristy, “We need people to come out and vote, we appreciate everyone’s support.”

Mayor Jacobs reminded the crowd, “Early voting is July 15th-July 30th, with election day on August 4th. Thank you for your support, it has been a privilege serving as your Knox County Mayor for the past four years.” Glenn Jacobs also invited the attendees to join him in welcoming U.S. Senator Marsha Blackburn to an event at the Barn Event Center on July 29 on Emory Road in Knoxville.