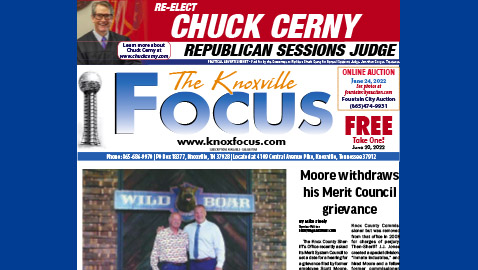 Jacobs, who is seeking re-election in August, met with constituents and had lunch at Wild Boar Tavern in Powell.

There was no speech, no formal words. The eat-and-greet was a time for Jacobs to sit and chat with supporters.

“This is just a time for people to come and talk to me in an informal setting,” said Jacobs, the professional wrestler and businessman turned mayor.

The environment couldn’t have been more casual as Jacobs had lunch at the establishment owned by Jim England, a former football player on Tennessee’s freshman football team.

The US Open golf tournament and ESPN were on the televisions and classic rock music played on the restaurant’s sound system. Jacobs and his party had burgers, sandwiches and chicken wings alongside other patrons.

These meetings are nothing new to Jacobs.

“This is something that we try to do about once a week,” he said. “We do it in different parts of the county.

“It’s a big county and the places in different parts of the county are different. Corryton is different than Farragut and then you have Downtown Knoxville. It’s a big county. It’s 536 square miles and there’s a lot of territory.”

Jacobs will be challenged by Democrat Diane Helsley in the upcoming election on Aug. 4.

Supporters mingled, visited with Jacobs and came and went during lunch time.

Knox County Sheriff Tom Spangler and Knox County Commissioner Busler each made an appearance early Thursday afternoon, along with several sheriff deputies and members of the Rural Metro rescue department.