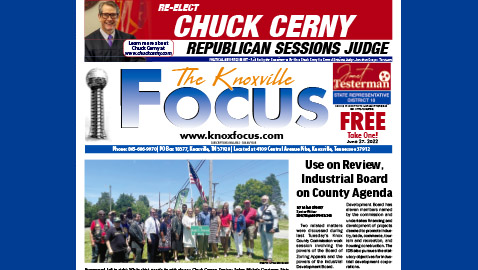 On Monday, June 20, a significant ceremony was held to honor a fallen soldier at Gibbs Ruritan Club. The ceremony was held to name two sections of highway for fallen Army Staff Sergeant and Gibbs High School graduate Ryan C. Knauss. Knauss was killed in a bombing at the airport in Kabul, Afghanistan on August 26, 2021, while helping American civilians and Afghan refugees evacuate the country during the withdrawal of American forces before the Taliban took over Afghanistan.

State Senator Becky Massey, state Representative Dave Wright, Ryan’s mother Paula Knauss Selph, his father Greg Knauss, and others attended the ceremony. Two segments of road will be designated as the “SSG Ryan C. Knauss Memorial Highway.” One section of Tazewell Pike between Henegar Rd. and Gibbs Road and a portion of East Emory Rd. between Beeler and Boruff roads will be renamed to honor Knauss. There will be two signs on the Tazewell Pike section and two signs on the East Emory Rd. section. Massey and Wright co-sponsored legislation to get the road name approved.

Ryan’s mother, Paula Knauss Selph, came up from Florida to attend the ceremony and was moved with the outpouring of support from the Gibbs and local communities.  “I miss Tennessee for that love, for the support for the kindness, there’s very few places in the world like Tennessee and especially in the Gibbs community,” Selph said. “There’s an absolute patriotism and support for our country.

“This is where Ryan grew up,” Selph continued. “This is all he knew as home. Senator Massey, House Representative Dave Wright and other political figures that came out today, they meant everything, because that is showing us that we still do have strong leadership in our country, we just have to keep pushing forward for more.”

Sen. Massey said, “(Ryan) knew from the very beginning that he wanted to serve this country. It’s just important that we don’t forget the sacrifices that our heroes are making, whether they’re killed in action or not. They’re giving up their lives, to put their lives on hold to go serve, to keep us so we have freedoms, all the freedoms that we take for granted often. But this community is such an amazing community anyway. They’re a tight-knit community. It’s just a small something that we can do personally to help remember.”

Ryan’s father Greg Knauss said of the two sections named for his son, “Apparently, it’s a rarity to have two sections of a highway memorializing somebody, so that’s special. It’s the area that he grew up in so that makes it special too.”

Wright talked about the process involved in naming two stretches of road for Knauss. “Tim Burchett and I attended the burial in Washington,” Wright said. “This particular naming of the four directions on this intersection took a special bill. Becky and I had separate bills in the House and Senate which were the same content to get this name in four directions. This is a reminder about people who have done very significant things in their lives. (Staff Sergeant Knauss) had that same focus and energy and activity and lost his life in service to our country, and we need to recognize him every day. I will do that now and I come out on Boruff Rd. every day,” Wright emphasized.

Speaking of the veteran biker community who attends events and memorials for soldiers, Selph said, “I have a connection on Facebook, Tik-Tok, Instagram of letting people know about things that are going on. And they come from all states. It’s not just about one community that cares. It’s about a nation that cares. It’s about all the soldiers that they’re coming to represent at these events. Ryan is just one man who was doing his job well and they’re commending him and reminding everybody, that there are more men and women out there that need our support. And the families that are left behind to fend for themselves, we all in the community need to gather round them because those men and women out there are our front lines. And we have to take care of our front line because once the front-line folds, we’re a very vulnerable nation.”