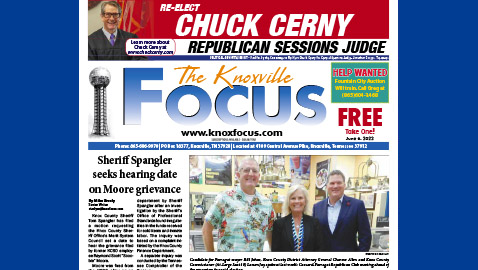 Knox County Commissioner Larsen Jay (At-Large Seat 10) and Knox County District Attorney General Charme Allen, who are seeking re-election, and Bill Johns, who is seeking to unseat incumbent Ron Williams as mayor of the Town of Farragut, spoke to club members at Fruition Café ahead of the Aug. 4 election. Kim Frazier (who is seeking At-Large Seat 11 on county commission) also attended the meeting and was invited to address the crowd.

Jay, who faces opposition from Democrat Dylan Earley and is seeking a second term on the commission, promised to be accessible.

“I am a lifelong Republican but I really wasn’t involved with clubs like this one,” he said. “I wasn’t a part of a grassroots movement. I’m a former film and TV producer.”

Jay won his election the first time he ever sought office. He ran for a county-wide seat.

“I have a wide table as my seat represents all of Knox County,” Jay said. “The day-to-day work of a commissioner is never done.

He noted that he has been in business in Knoxville and Knox County for nearly three decades. He’s been on every side of town and noted that that makes him a great candidate to serve in his current capacity.

“I’ve been here for 29 years and I’ve worked in all parts of town; north, south, east, west and even downtown, “he said.

Johns spoke next and said he is seeking to become mayor of the Town of Farragut because it’s “the greatest place in the world to live.”

But he noted that Farragut faces challenges as the town continues to expand and as the economy continues to spiral downward. He also said that he attended a town planning meeting for more than seven hours and received no response from the town’s leader.

“We need citizen respect and participation,” Johns said. “The reason that I decided to run for this office was because of this club right here.

“I also went to a planning meeting and sat there for seven-and-a-half hours. (Farragut Press reporter) Tammy Cheek and I were the only ones who were there.”

The meeting, he said, accomplished nothing. He also said no one acknowledged his presence at the meeting.

“It was a planning meeting and nothing was being planned. I proposed a plan and no one followed it.”

Johns and Jay both brought up voter apathy.

“I was extremely dismayed that only one in 10 registered voters voted in the (primary) election,” Jay said. “We are lazy and we are complacent and we need to engage.”

Allen has worked in the District Attorney General’s Office since 1989.

During her remarks, she acknowledged her staff for its hard work and distributed her 2021 Year in Review Report.

“My entire life, I knew that I wanted to be a prosecutor,” said Allen, who is seeking another term in the office.  “I’ve been with the office since 1989 and I’ve been the District Attorney General since 2014.”

She also noted that she and her staff have been transparent to the extent the law allows. Allen has her own podcast, “Generally Speaking,” and created a citizen’s academy.

She faces opposition in August from Jackson Fenner, a Democrat.

“I have a Democratic opponent and I won’t speak ill of him, but I will speak the truth,” Allen said. “But (Fenner) has never prosecuted a case.

Allen made her appearance just hours after successfully filing an injunction to have The Ball Gentlemen’s Club and Jolly’s Bar shut down. The establishment was deemed a public nuisance.

She noted that Knox County has several areas and people from those areas are seeking solutions to their challenges as they should. Frazier is seeking the seat of the term-limited Justin Biggs who is running for trustee.