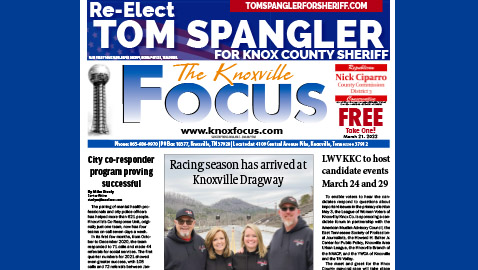 Outrun the Po Po benefit to be held this Saturday

Racing season is here at Knoxville Dragway, which is just over the Knox County/Union County line. The venue will host its first big event of the year and it will benefit officers in both the Knox County and Union County Sheriff departments.

Outrun the Po Po will be Saturday at 10 a.m.

Track co-owner Wes Clapp said that his sole intention for the event is to raise money for the officers in Knox and Union Counties.

“This is not a political event,” Clapp said. “This is to raise money for officers in both departments.

“We’ll have some deputies there and anybody can bring a car and race.”

A $10 entry fee will be charged at the gate and that covers admission to the race for spectators and registration for racers.

Children 10 and under will be admitted free.

Saturday’s event kicks off an exciting season of racing and auto shows at the track, which has been renovated.

Clapp owns the track with his wife, Kristin, her mother, Kathy Southers, and her stepfather Roy Southers, making racing at Knoxville Dragway a family affair.

The dragway has been open since the 1960s but Clapp and his family are the first local owners.

Racing has always been a passion for Wes.

“I’ve raced and I’ve put on events here and across the country. “I’ve just loved to race since I learned to drive,” Clapp said. “I grew up in Gibbs, and every day after school me and my friends would go out and race.

“This place has been around since the ‘60s, but me and my family are the first local owners. It’s been owned by people from Madisonville, Dandridge and Newport.”

Knoxville Dragway has regular events five nights a week and the track is part of the Outlaws Head’s Up Series circuit, which sanctions races throughout the Southeast.

The track also hosts bracket races, where drivers must not only win but predict their time.

The track also host 10-buck Tuesday, where anyone can pay $10 and race.

The track is not open on Wednesdays, but opens occasionally on Sundays for remote control racers.

“We have things going on five nights a week,” Clapp said. “We’re closed on Wednesdays.

“Every once in a while, we open the track for RC racing. We do that about once a month and we let those come in here and race their cars.”

The track also has a junior dragster program.

Clapp also said that the track would also feature a tractor pull arena in the near future.

“We have something for everybody,” he said.

Clapp and his family take pride in Knoxville Dragway, which Clapp said includes one of the best concession stands in the area.

“We have a great concession stand,” Clapp said. “We really take pride in it. We’ve got two ladies in there who will cook to order.

“At our bigger events, we will have three or four cooks in there.”