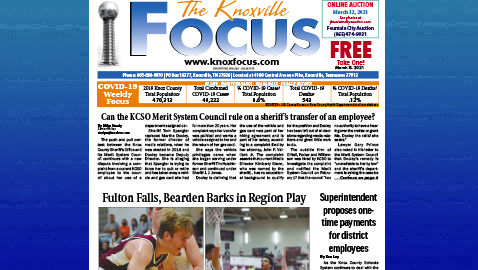 Can the KCSO Merit System Council rule on a sheriff’s transfer of an employee?

The push and pull contest between the Knox County Sheriff’s Office and its Merit System Council continues with a new dispute involving a complaint from a current KCSO employee to the council about her use of a department-assigned car.

Sheriff Tom Spangler replaced Martha Dooley, the former director of media relations, when he was elected in 2018 and Dooley became Deputy Director. She is alleging that Spangler is trying to force her to quit or retire and has taken away a vehicle and gas card she had for more than 20 years. Her complaint says her transfer was political and wants a vehicle assigned to her and the return of her gas card.

She says the vehicle privileges came when she began serving under former Sheriff Tim Hutchinson and continued under Sheriff J. J. Jones.

Dooley is claiming that the use of the vehicle and gas card was part of her hiring agreement and is part of her salary, according to a complaint filed by her attorney, John P. Valliant Jr. The complaint asserts that current Media Director Kimberly Glenn, who was named by the sheriff, , has no educational background to qualify for the position and Dooley has been left out of all decisions regarding media relations and given little work to do.

The outside firm of O’Neil, Parker and Williamson was hired by KCSO to investigate the complaint and notified the Merit System Council on February 17 that the council “has no authority to have a hearing over the matter or grant Ms. Dooley the relief she seeks.”

Lawyer Gary Prince also noted in his letter to the Merit System Council that Dooley’s remedy is “unavailable to her by law” and the sheriff’s department is asking the case be dismissed at the “grievance” or continuance hearing.

The Knox County Law Director told the Merit System Council, on February 23, that the council “has no power to order the relief requested.”

“Ms. Dooley and her attorney both concede she is not an “on call” employee,” Law Director David Buuck opined in this notice to the Council.

“The Merit System Council has no authority or jurisdiction to order the Sheriff to provide Ms. Dooley a taxpayer funded car or taxpayer funded gas card. Ms. Dooly does not complain that she has lost salary.

“Transfers may be instituted only by the Sheriff and shall be permitted only with the consent from the Sheriff,” Buuck continued.

Referring to Merit System Rule 9.5 Buuck noted the term “salary” does not include property of the sheriff’s office assigned to an employee for the purpose of performing his or her duties.

“Ms. Dooley cannot complain about the purported “benefit lost.” She has the right for this council to hear her grievance if she feels the transfer was not mission essential. However, the relief she has requested cannot be ordered by the Merit System Council,” the law director’s letter said.

Nonetheless, the Merit System Council met Wednesday on the 6th floor of the Andrew Johnson Building without public coverage by Zoom or CTV in a “continuance” meeting with all parties involved.

The council voted to set  hearings for May 4 and 5 at 9 a.m. with the location to be determined.