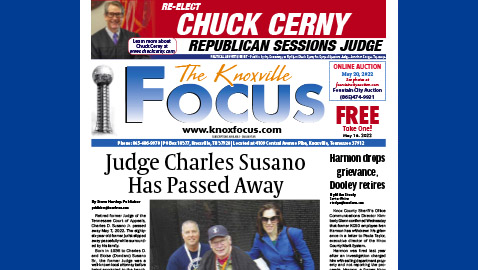 Judge Charles Susano Has Passed Away

Retired former Judge of the Tennessee Court of Appeals, Charles D. Susano Jr. passed away May 7, 2022. The eighty-six-year-old former jurist slipped away peacefully while surrounded by his family.

Born in 1936 to Charles D. and Eloise (Dondero) Susano  Sr., the former Judge was a well-known local attorney before being appointed to the bench. Susano was married to his loving and devoted wife Carolyn for a remarkable 57 years. Judge and Mrs. Susano were the parents of three children: Stephen, Charles III, and daughter Maria. Stephen lives in Nashville with his wife, Ana; Charlie and his wife, Robin, live in Knoxville and Maria lives in Arlington, Virginia. Judge Susano leaves behind six grandchildren whom he adored: Sophie, Jacob, Madison, Sydney, Hanna and Hudson. Judge Susano also leaves behind Preston Warren of Dallas and wife, Jennifer; Charles Susano loved Preston like a son. Susano is also survived by his brother Tommy, brother-in-law David King and his wife, Jennifer.

Charles D. Susano, Jr. lived a remarkable life, which in turn touched the lives of countless others. A man always guided by his strong Catholic faith and firm belief of Eternal Life, Susano needed that faith when he experienced a life-altering accident. For the last 30 years, Judge Susano was confined to a wheelchair after he fell through a second-story window while sleepwalking. The accident left Susano paralyzed from the chest down. Yet Susano never considered himself to be handicapped. “I’m only handicapped if I let myself be,” Susano said. “At worst, I have been challenged, forcing me to reinvent new ways to negotiate the new times.”

Throughout his tenure as a sitting judge, Charles Susano was recognized for his ability and character. Susano was the recipient of the Frank F. Drowota, III (a former Justice of the Tennessee State Supreme Court) Outstanding Judicial Service Award in 2017. Judge Susano was recognized by the Knoxville Bar Association when he was presented with the group’s Courage in the Face of Adversity Award in 2004. Susano was also named the Appellate Judge of the Year in 2003 by the American Board of Trial Advocates for the State of Tennessee.

Judge Susano’s physical presence was a constant reminder of his grit and determination. Susano was oftentimes seen zipping around downtown Knoxville in his motorized wheelchair from the courthouse to Gay Street for meetings or lunches.

1958 was also the year Susano was drafted into the U. S. Army. Honorably discharged in 1960, the future judge moved back home to Knoxville where he enrolled in the University of Tennessee’s College of Law. A member of the Law Review, Charles Susano graduated with the Order of the Coif in 1963. Susano then served with the first group of law clerks to the justices of the Tennessee State Supreme Court, where he personally clerked for Chief Justice Hamilton S. Burnett.

For a good many years, Charles Susano practiced law with the prestigious firm of Bernstein, Susano & Stair. Later, Susano was the senior partner in the firm of Susano, Giordano & Swanson.

The highlight of Charles Susano’s legal career was his appointment in March of 1994 to the Tennessee Court of Appeals by then-Governor Ned McWherter for the Eastern Section of the Volunteer State. McWherter’s appointment of Susano was ratified by the voters in the general election that same year. Susano was retained by the voters again in 1998, 2006 and 2014. From 2013 through 2015, Charles Susano served as the Chief Judge of Tennessee’s Court of Appeals. When he stepped down from the bench in 2020, Charles Susano was the longest-serving judge in Tennessee’s appellate courts. Judge Susano, a man who valued a strong work ethic, let nothing deter his own workload and left behind a prolific number of legal opinions, numbering over 1,000.

The Susano family is profoundly grateful for the support they have received from the Knoxville community and especially wish to thank the dedicated caregivers and the UT Hospice team for their numerous kindnesses and the compassionate care they gave to Judge Susano.

In lieu of flowers, donations may be made to The Judge Charles D. Susano, Jr. Memorial Scholarship Endowment at the University of Tennessee College of Law (ATT: Ms. Ellen Cole, Director of Advancement, UT College of Law, 1505 Cumberland Avenue, Suite 248, Knoxville, TN, 37996).