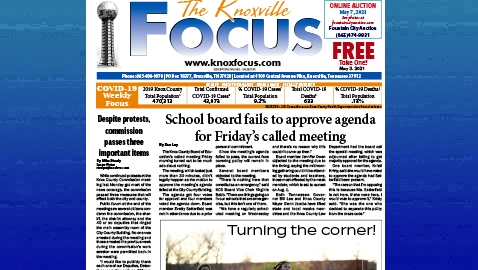 While continued protests at the Knox County Commission meeting last Monday got most of the news coverage, the commission passed three measures that will affect both the city and county.

Public forum at the end of the meeting saw several citizens condemn the commission, the sheriff, the district attorney and the 40 or so deputies that ringed the main assembly room of the City-County Building. No one was arrested during the meeting and those arrested the previous week during the commission’s work session were permitted back in the meeting.

“I would like to publicly thank each one of our Deputies, Detectives and Corrections Officers who helped ensure tonight’s County Commission meeting was a safe and peaceful meeting,” Sheriff Tom Spangler released in an email Monday night following the meeting.

The commissioners voted to approve the nominees to the Sports Authority. Consultant Mark Mamantov told the meeting that the Authority would be reporting all expenditures and actions for approval and would hire a contractor for the project. He confirmed that the eventual cost of the city-county owned complex could increase from $90 million to about $120 million.

He also reminded the commissioners that while the Sports Authority would issue bonds to cover the complex the city and county would be responsible for any shortfalls in payments.

In a split vote the commission gave the Industrial Development Board authority to finalize negotiations with BNA Associates LLC to accept or waive payments in lieu of taxes for the purchase of the historic Andrew Johnson Hotel.

The Gay Street landmark, currently home of the Knox County School Administration Offices, has been before the county for a decision for several years. BNA had changed its original proposal, dropping hotel rooms in favor of apartments, and asking for a tax break. The building will sell for $6 million with a promise of a multi-million dollar restoration for retail and apartments.

County Finance Director Chris Caldwell told the commission the sale should be finalized in September with the board of education scheduled to move out before the next school year.

The 7-2-2 vote saw Commissioners Schoonmaker and Dailey voting “No” and Kyle Ward and Charles Busler passing.

The commission had two upcoming vacancies on the Knox County Sheriff Office’s Merit System Council and four people applied for the positions. Commissioner Kyle Ward wondered if one of the nominees, Patti Bounds, could legally serve on the merit group while serving as an elected board of education member.

While Bounds was nominated by Commissioner Charles Busler she received his vote only.

The alternate slot on the council went to Marshall.

The Merit System Council has been butting heads with the KCSO over which group has powers and duties in hiring employees. Three grievances are before the council, one on the transfer of an employee and two deputies are appealing their firings. The law director has told the council it has no powers to rule on those matters but the council is moving ahead with hearings.