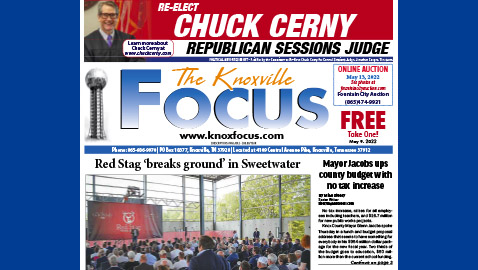 The Red Stag facility will be located just off Exit 62 of I-75, north of Athens. This will be the third Red Stag campus, following the Knoxville and Salt Lake City locations, and is planned to be the largest so far with up to 4.5 million square feet of space in six warehouses to be built on its 420 acres.

Jordan Mollenhour, co-founder of Red Stag’s Knoxville-based parent company Mollenhour Gross, spoke of the welcome the community has given and how they are excited to provide support to small and medium businesses from all over the world in the new east coast main hub.

Red Stag is a global eCommerce order fulfillment company that stores, packages, and ships products that range widely from furniture to pet food to electronics.

“We’re an eCommerce company that does the heavy lifting of eCommerce. We enable great brands to build their businesses,” Red Stag CEO Dusty Holcomb told those attending the event.

“We receive inventory. We store it. We send it out when an order comes in. It doesn’t sound like rocket science but it really is because what our founders learned is that nobody cares for your business the way you do. We were born on the client’s side.”

Governor Bill Lee called the potential of the new facility for the region and the state “life-changing.”

“What we do is provide an opportunity for people’s lives to be changed because when there’s meaningful work and work that brings dignity and life-changing transformational work, we change lives and we create an opportunity for the future of our state.

“We live in the greatest state in our country.”

City of Sweetwater Mayor Doyle Lowe recalled two years ago when Mollenhour approached him with rolls of papers under his arms and an idea for a development to share. Lowe said that the planning commission is already starting to look at additional residential zonings for houses and subdivisions in anticipation of jobs.

“People are already looking to come to Sweetwater,” Mayor Lowe said. “Things are happening in Sweetwater and we are blessed. We are blessed beyond measure that we have a company like Red Stag coming to Sweetwater.”

The company plans to start hiring this summer and open for business in September.